Conventional aviation practice says you should install aircraft bolts with the heads either up or forward into to the slipstream whenever possible. Like any ideal, there are always situations that go against the rule and force you to do things the "wrong" way. Until recently, I believed the two lower motor mount bolts for the Revmaster engine could only be installed backwards with their heads in the cockpit. During the final assembly process, I confirmed with several other Q2 and Tri-Q2 pilots, who fly their Revmasters with the heads of the lower bolts in the cockpit. I resigned myself to install the engine that way. After an 8 hour session of total frustration, just in the attempt to get the nuts started on the lowerbolts because Proper Aviation Bolt Orientation they were so close to the engine case, I realized I would have to find a betterway. After all, the enginehas to be removed eachannual to get access to themags and this would not do. I had a conversation with Fred Weminering andlearned that his lower bolts were installed with their heads forward, so I knew there had to be a way. 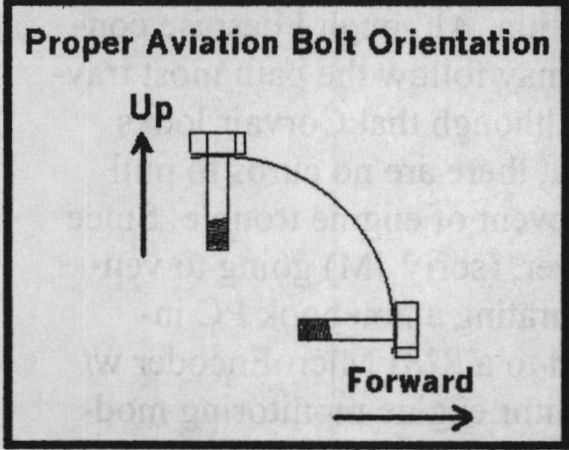 With only about 10 minutes of work, I was able to get the lower bolts installed correctly and the engine installation process went from 8 hours to about 40 minutes! Here is what I did. I removed the engine from the plane. The work can be done with the engine hanging from an engine hoist, if the accessory case is free to move once it is loosened or you could install the 4 shipping legs that connect into the heads at the exhaust pipe locations. There are four large Allen head bolts that hold the accessory case to the aft surface of the Revmaster engine where, I suppose, the transmission was normally installed. The Allen head bolts require a 5/16? Allen wrench and the two top bolts require a 17 mm wrench. The two lower bolts screw right into the case. By the way, removing the starter and mags can help speed up the process. Once the four Allen head bolts are removed, the only thing holding the accessory case on is the magnetic field in the alternator. A few light taps with a rubber hammer on the 4 engine mounting tabs will loosen the accessory case and allow it to be removed from the engine. It does not need to be moved very far from the aft surface of the engine to accomplish the task. Once the accessory case is free, install the motor mount bolts and the large fender washers on the two lower motor mount tabs and place the accessory case back on the engine. Replace the four Allen head bolts, starter and mags and you are all done.

You can order a printed copy of Q-talk #90 by using the Q-talk Back Issue Order Page.