Q-talk 87 - Raise an Eyebrow and Lower Your Temperature

Q-talk 87 - Raise an Eyebrow and Lower Your Temperature

Raise an Eyebrow and Lower Your Temperature

Like most Revmaster drivers, I have been plagued with high CHT temps from the start. With lots of attention to air intakes and plenums. I finally got the temperatures to stay in the green. However, at a climb-out speed of 85 mph, there was a big difference in temperatures between the left bank and the right bank. The left side would read 350 degrees on cylinders 1 & 2 and the right bank would read 425 degrees on cylinders 3 & 4.

That was exactly opposite of what I was anticipating. Since the propeller is on the up swing across the cowling inlet for the right bank, I was expecting it to cool better than the left side where the prop is pulling air out of the inlet. That shows what I know.

My only conclusion was that the prop must have been forcing the air up and over the intake. In an attempt to decide if this theory was as flawed as my original thoughts, I decided to move the right-side intake up closer to the prop. I made the initial extension (eyebrow) out of lightweight tin sheeting, like that used for roofing. I simply pop riveted it to the cowling.

Off to fly. Much to my delight and satisfaction, on the same 85 mph climb out, the right bank CHT temperatures were reduced to 350 degrees, a 75 degree drop. Now all four cylinders were reading the same. I just kept climbing. They all remained steady. At 5,500, I leveled off and set cruise at 3200 rpm. The temperatures all dropped to 300 degrees. I was a happy lad.

Since it was easier to make a square box out of the tin, and it worked, I kept the square box configuration in glass. Doesn't look that great, but it sure works.

The next step is to make a tin box for the left side and see if it reduces the temperatures an appreciative amount. If so, I will then bring the right side up closer to the prop to see if I can get a corresponding reduction on the right side. I will play around until I can get both sides equal and as low as possible. Then I will play with more attractive configurations, i.e., round or oblong inlets. All of these applications will probably require some reforming of the cowling to bring the eyebrow into the overall flow of the cowling.

An added benefit is that as long as I keep hacking around on the cowling, I can justify not repainting for awhile longer. 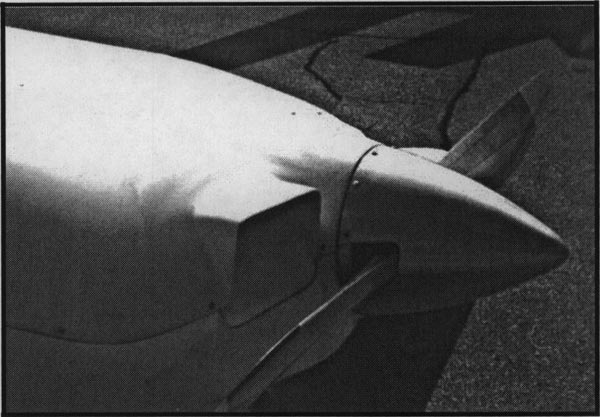