This is the first article in a two or possibly three-part series on the topic of magnetos. This issue will cover the fundamental principles of a modern magneto. The next issue will be an addendum to the Teledyne Continental Motors (TCM) service manual for the D4RN-3000 magneto used in the Revmaster 2100D engine. The TCM manual is designed to provide information for both left and right hand turning engines, pressurized and non-pressurized engines and many other issues that do not relate the magneto used on the Revmaster. The addendum will isolate and cover only those issues related to that specific magneto. I would ask that someone in the QBA familiar with magnetos used in 0-200 engines prepare the final installment of this series.

Information about how to obtain TCM magneto service manuals and other background material will be included in the next edition of Q-Talk.

If you are like me, magnetos have been pretty much a "black box" that only those anointed by the FAA should be allowed to peer inside at their many wonders. Actually, there might be some things you can test and correct in an effort to get the optimal spark to be produced by your magneto. 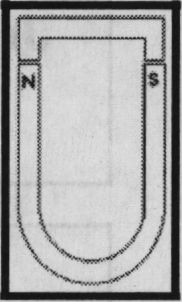 By now, everyone has seen in science class how lines form when you place a horseshoe magnet under a piece of paper sprinkled with iron filings. The iron filings collect and even stand on end along the curved "lines of flux." These flux lines can be concentrated if you replace the piece of paper and iron filings with a piece of soft iron shaped like the letter C that spans the gap between the two poles of the horseshoe magnet. The flux lines find it up to 2700 times easier to go through soft iron than air.

Another interesting property of magnets occurs when you pass one through the center of a coil of wire. If you connected a voltmeter to either end of the coil and pass the magnet inside the coil, you will see both positive and negative voltages being generated depending on the direction you move the magnet. Most generators work on this principle. Also, if you pass a current from a battery through a coil of wire, the coil generates a temporary magnetic field. This is how junkyard electromagnets work. 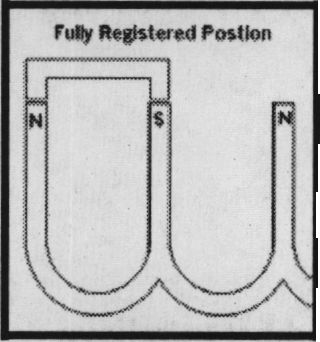 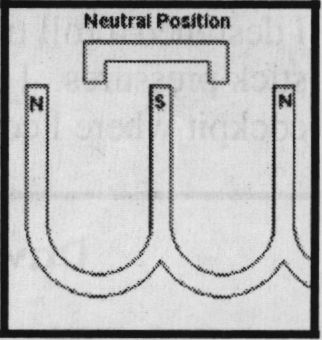 If you wrap the original coil of copper wire with 1000 times as many strands of a much thinner insulated wire, the thinner wire is "induced" to multiply the voltage of the larger wire coil also by 1000 times. With the original large coil of wire, or primary coil, and the new thinner coil of wire, called the secondary coil, wrapped around the center portion of the C-shaped piece of iron, you can pass this over the endless line of horseshoe magnets and slosh some fairly high voltages and magnetic fields back and forth inside the C-shaped piece of iron and the coils. 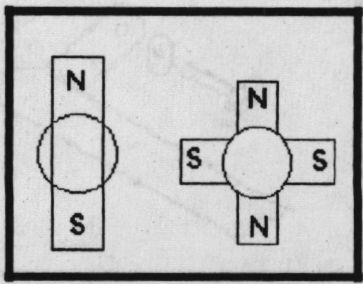 The endless line of horseshoe magnets is impractical. It can be replaced by a minimum of one bar magnet or four horseshoe magnets shaped something like a plus sign (+) when viewed from above. When spun, this can produce the effect of an endless array of magnets. Now that we have a practical set of magnets, we need a method to be able to tap into the high voltages so it can be delivered to the spark plugs. A switch is required between the two ends of the primary coil. Breaker points, actuated by a cam located on a shaft that goes through the center of the magnets, can be timed to open and close at the optimal points in the rotation of the magnets. The cam is designed to open the points after the Neutral position but before the Full Register position where the magnetic disagreement between the magnets and the forming electromagnetic coil in the C-shaped piece of iron is the greatest. This point is called the Efficiency Gap or E-Gap for short. When the cam opens the breakers at this all-important E-Gap point in the rotation, the current in the magnetic field in the primary coil collapses, like one side letting go in a tug-of-war contest. The secondary coil, wrapped around the primary coil, receives the benefit of this dramatic and very fast change in voltages and magnetic flux. The result is the output wire of the secondary coil is induced to transmit 12,000 to 20,000 or more volts to the distributor, ignition harness and finally to the spark plug. 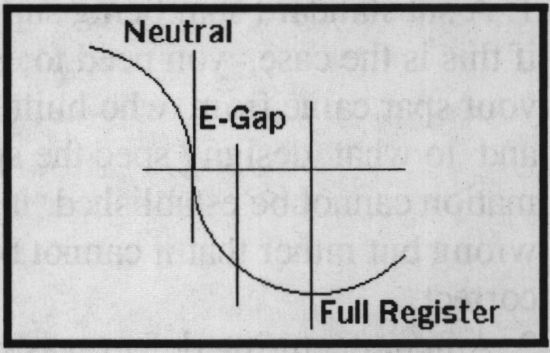