Well...after 7 years of pursuing this passion of flying a tandem wing aircraft, I can now introduce myself to everyone as a Q2 pilot. I flew N25974 this AM!!!

Let me give you a little history to refresh everyone on my Q2 and me. I started in 1994 by buying a partially built Dragonfly and after 4 1/2 years and "only" making the canard & wing, I decided to buy N25974 from my Tech Counselor, after I realized I wanted to fly more than build. N25974 had flown 70+ hours with a RevMaster but had last flown in Nov. '89. They pulled the RevMaster to put a C-85 on it but never did. I had a Type 4 VW that I was planning on using in the Dragonfly and told myself "All I have to do is install the engine." That was 2 1/2 years ago. Steve Bennett of Great Plains Aircraft lives in Omaha and belongs to my EAA chapter, so he helped me put the engine together in his basement as well as helped with the physical installation of the engine. I also went through the whole airplane and made some mods that I thought were needed. I did not do a wheel alignment! Late last summer I began my taxi testing and my goal was to do 20.1 went to the Ottawa, KS fly-in in Oct. where pilots found me out and said "Lets go show you how to fly this thing." Thanks Bruce Crain, Paul Fisher & Les Hildebrand for the rides!! I came home hoping to finish my taxi testing and do my first flight by winter. I got 13 high-speed taxi's (HST) in before the worst winter in 13 years set in. During these taxi tests, I adjusted everything including antennas. Nothing was scaring me, which concerned me. These things aren't supposed to behave well on the ground. 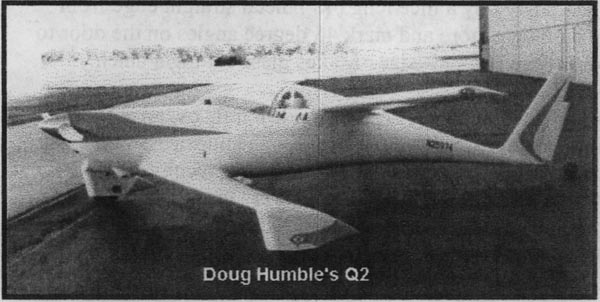 As the outside air temps came up in March, I went back to my HST tests. I was able to get the indicated air speed up to over 60 mph. She got loose on me a couple of times, but still controllable. I got my 20 taxi's completed but the weather on the weekends were never right for first flight, so I ended up with a total of 25 HST tests.

Last night the weather looked favorable, so I call my Flight Advisor and a ground crewman and said, "Lets give her a go in the morning." I am flying out of the main airport in Omaha that is class C airspace. Earlier in the week I called the tower & approach and went over the flight plan with them. Everyone was very accommodating. The approach supervisor even said "We'll be glad to have you with us." The flight plan called for my Flight Advisor to fly chase in his RV6 and be the one using the radio and transponder. We asked approach if we could request a separate frequency. They said we could use a secure frequency from Offutt Air Force Base that they could also monitor. This is exactly what occurred.

We went over the flight plan at the hanger and did a pre-flight. The ground crewman took his place and we started our engines. The winds were out of the South at 4 knots but we had called the tower beforehand and confirmed that we could use 32L as it points away from Omaha metro. They accommodated us. Oh yeah, its 9000 feet long by 150 feet wide. I think that had something to do with our choice as well.

We taxied out and had to hold short for about 5 minutes waiting for traffic. As I look back, I'm glad we had to wait. I took a few deep breaths to calm myself and gather my thoughts. Then we were cleared. I wiped the canopy one last time to remove the fog (which as everyone had told me, never reappeared) taxied out and put the throttle to the firewall. At 60 mph indicated I quit looking at the airspeed indicator and put my eyes outside. I began to gently apply some back pressure. She lifted off, the left wing dipped mildly and I corrected for it. I guess I weigh more than the roll adjustment I had made before preflight. (I'm sure I'll lose the weight this summer!) I climbed out at 110 -120 mph to 5000 feet and circled a nearby lake with my chase plane on my right. The airport was within gliding distance from where we circled. I think I was seeing about 800 feet per minute climb rate, maybe 1000, I was busy!!!

We started to check temps. Oil temp was at 200 degrees and my flight adviser told me to throttle back to 2600 rpm. When I did, the engine started running very rough and my chase plane told me I had black smoke coming out my exhaust. (Any comments on possible causes are welcomed. I'm using a RevFlow carb) I applied carb heat and throttled back to full power and the engine smoothed out. The black smoke stopped also. It never reappeared. Then we throttled back to 1900 where the engine ran fine with carb heat on. We kept the carb heat on throughout the flight. We then did some "S" turns with no problems. The temps were looking better as the oil temp came down to 180 degrees. The head temps were 425 & 375 on #'s 1 & 3 respectfully. Never got to 450 degrees but we'll have to improve on this as it was only 40 degrees up there.

We then slowed the bird down and she started pitch bucking at 73 mph indicated. A little higher than anticipated so we adjusted my planned final approach to 85 mph. It was also at this time that I had my chase plane come up along side and tell me when I had enough reflexor in to put me in my landing attitude. I put in a lot more that I had anticipated, and if for nothing else, this made the chase plane worth having. In other words, it took a lot of reflexor to get the tail down!

So it was time to go home. I was too high on final and too fast, but I looked at that BIG runway down there and said "Let's just get her down to the runway and then slow her down". That's what I did. I pulled the power back and came down at 120 mph indicated. I did make some minor adjustments in the reflexor, relieving some backpressure, but not a lot. I was a little twitchy on the pitch control as I went up, then down, then up, but finally I settled down and started controlling the pitch. I was about ten feet above the runway and just kept her off as she slowed and settled in. I have a speed brake and had planned on using it, but I was too busy and said screw it. I really don't know what speed I touched down at but when she planted herself she didn't bounce or anything. As everyone one had told me, the roll out was better than any HSTI had done. She flies and lands great guys!! At least she did today. For those who are curious, the chase plane came down with me but stayed behind me and did a planned go around after he saw I was on the ground.

I taxied back to the hanger where my flight advisor and ground crewman were waiting and we started discussing things. The crewman asked where my grin was. I was still very focused and said that I needed to call my wife to let her know things went OK. After I left a message (she was out walking the dog) we continued to discuss the flight. My flight adviser was telling me some details and I looked at him and said he should probably tell me again later as I thought it was finally hitting me what I had just done, as I had not heard a word he had just said! They both started laughing at me. The flight had lasted about 35 min.

I don't know what else to add except that I have a lot of folks to thank and you know who you are, so... THANKS GUYS! I'll see some of you at Sun 'n Fun next week. I'll be wearing a Hawkeye hat and a big grin!!!!!!!

You can order a printed copy of Q-talk #86 by using the Q-talk Back Issue Order Page.