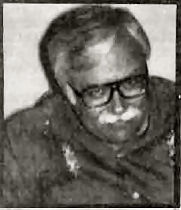 My impression of Oshkosh this year is best described by a line from the fairy tale "Goldilocks and The Three Bears". When Goldie tasted the third bowl of porridge, it was jUUUUUst right. That was Oshkosh this year, jUUUUUst right. The weather was light jacket comfortable in the mornings, warming to just comfortable in the afternoons. There was one afternoon of light drizzling only and that put an oh-so-slight crimp in the airshow, but it was not a miserable downpour (the campers probably will tell another story though!). The crowd seemed to be well dispersed so that it didn't feel to me like wall-to-wall people. There were good bargains to be had in the vendor buildings (and for those of you finding money short for airplane parts, I don't EVEN want your wives to know about the HUGE, bargain outlet mall just across the highway from the EAA grounds. Hell, I couldn't even keep MY feet out of the Land's End Outlet, and I need money for an engine!) and best of all, a bunch of our buddies flew their planes in for show-and-tell. Here's who they were as of my departure on Tuesday morning:

* TTB = Time to Build in Months

I know you're wondering, so for the record the 17 aircraft that showed this year is the second highest number, bested only by the 18 on the line in '87 (including 4 Onan powered Quickies). For those of you whose eyes will focus immediately on speed in the above listing, do note that where a pilot cruises his plane is highly variable and has no relation to top speed.

If you need a story or two of inspiration, listen up. Kisthard pranged his taildragger and rebuilt as a Tri-Q; Hoskins and Harris both broke their taildraggers, repaired and re-flew; Fisher nicked his beauty this year and was out of the air several months; Groff yanked his flying C-85 in favor of an 0-200; Jones needed power for the mountains and chucked his nicely running Revmaster for an 0-200; Doyle wasn't comfortable in his flying taildragger and installed a Tri-gear. This is all to tell you that these guys not only finished and flew, but they liked the plane so much that they grit their teeth and did major work to make them to their liking. And then, they flew to Oshkosh to show off ... and inspire the rest of us who seem to be chasing the world record for *TTB!

As always, even casually strolling the flightline turns up some tips to take home. Here are a few out of the many: Remember Rob LaRue who got us all thinking about brakes in a new way? He was there for consultation and a few planes away was Hoskins with his brake covers off for a good gander at the installation. Jewett had his wife sew up a black cover that extends from the back of the instrument panel to the canopy closure lip. It sticks on with Velcro and is a no-screws instant access to the panel back that covers the wiring spaghetti with a nice, clean look when installed. Shapley positioned a cockpit vent on the dorsal surface just behind the aileron torque tubes so he could peek in with a flashlight on pre-flight to inspect the tubes. Shapley also did a neat trick with the seatback. He sat in the plane with a garbage bag behind him then had his wife mix up some pour-in-place foam and pour it in the bag. As the foam set, he got into a comfortable flight position. When the foam set completely, he trimmed it, glassed it over and had a custom fit seatback. Neat. Many an eye was caught by Doyle's large external venturi that runs a DG and horizon. Jim says it has very little effect on his speed (even though you wouldn't think it!). 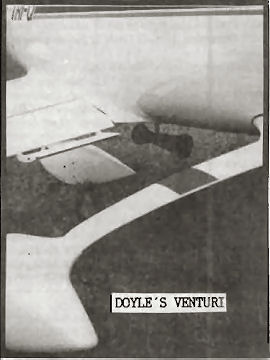 QBA FORUM, FRIDAY - This was not our standard day due to a scheduling foul-up but Q-TALK announced it and everybody in the states should have gotten it before leaving home for the show. We did have a slightly smaller group (est. 120 or so) with a very active participation. Most of the show plane pilots were there and when I asked for a show of hands of those who had ever contributed to Q-TALK, I was gratified to see that about half in the audience had.

Yup, Scott and Duane Swing were there. Scott is still supporting his Tri-Q mod along with his new interests in the Velocity. And let me interject that while I get a lot of credit for putting planes in the air due to Q-TALK, Scott has been our only readily accessible source of engineering/testing info as QAC did it. And ... he has not been stingy with his time. We owe him our thanks.

Among the other numbers of Oshkosh were an estimated 815,000 attendees (down about 3% from last year), 12,000 transients, 2,067 show planes, 565 custom builts, 150 antiques, 42 rotorcraft, 293 warbirds, 162 ultralights, 120 seaplanes, and 15 gorgeous aircraft from the Golden Age of Air Racing (many of which were beautifully shown off in the movie ROCKETEER recently).

I don't know how many more years we're gonna be welcoming home Desert Storm veterans, but we did it again. I hope all our Vietnam vets are taking note because all I can figure is that this constant stream of celebration is as much a belated honoring for our S.E. Asian troops as it is for our desert boys. The National Conscience is finally trying to express its guilt. Let's hope it will be forgiven. But, I digress. The upshot of all this was an excellent showing of military hardware. This was a bumper year for a wide assortment of F planes and helicopters displayed aerially and statically. There was even a scud-killing Patriot launcher in a prominent location.

Aircraft at Oshkosh this year were:

And this will be remembered as the Year of the Great Oshkosh Fires. A great wailing of sirens on Sunday night alerted us to the glow on the middle horizon. Those of us in the taller university dorms could see flames licking up to the sky. Steve MacLeod and I dashed off to rubberneck and feel the heat. It was a good-sized warehouse on the north side of town and it was a spectacular blaze. Two more times the sirens pierced the air that night. The radio reported arson on the last two, but the first was still being investigated as I left.

On September 20 I left for Ottawa, KS about 50 miles southwest of Kansas City to attend a Dragonfly swarming. I think I mentioned this impending fete at OSH, but I'll be bullfuggled if I can find any mention in the newsletter. I goofed. Anyway, a little over a year ago the Dragonfly guys got themselves an independent newsletter and editor who has been going like a house afire since. It appears that Rex Taylor is out of the Dragonfly biz now so these guys gotta help themselves.

The aforementioned new editor, Spud Spornitz, did a good job of organizing and promoting a fly-in at Ottawa. He's also hot on the trail of getting our two groups "associated". He was successful on both counts! Despite a gorgeous weekend forecast that turned to mush late Friday afternoon, Spud attracted over 75 people (my count), 4 very nice Dragonflys (from as far away as Florida), a Tri-Q (Doyle, IL), two Q-200's (Harris, CO and Fisher, IL) and a Rotax powered Quickie (Barber, Huntsville, AL). If you play the numbers game, he beat our June flocking all to hell and had just as many Q planes as well! He's got ME sitting upright and paying attention.

This business of joining forces in a fly-in seems like a right idea. These guys are not as snobby as some of the EZ guys seem to be (maybe clannish is a better word) and all of us Q guys were made to feel VERY welcome. Spud even presented an award for best Q-bird during the evening's banquet at Ottawa College.

To be sure, the similarity of our aircraft is only skin deep. Watching Harris cavorting in the area giving rides to and with the other Dragonfly guys proved that in a flash (and the full power low passes in the 25 mph downwind didn't hurt a bit). Harris did some high performance climb outs that made the Dragonflys look anemic. Still, as I told somebody with his mouth dropped open: "When you're on the takeoff roll in your own beautifully finished Dragonfly, any difference in performance won't mean a hoot to you." You will BE in the snappiest performer of all.

They think our short wings look gooney, we think the same of their engines. Nevertheless we are all dedicated craftsmen chasing the same dream. We appreciate that in each other in spite of all the razzing we can exchange about the planes. We've been parking together for years. Whaddaya think about a joint flocking/swarming next year?

You can order a PDF or printed copy of Q-talk #29 by using the Q-talk Back Issue Order Page.