Long time since I have sent you any information. One of the ideas brought up at Oshkosh has never been printed so maybe it's worth printing. It is a take-off of a previous idea from Norm Howell that was published.

The subject is brake pads for the Quickie. For whatever reason if you have chosen to install some sort of pad on the aluminum tire scrubbers what I have learned may be of benefit. There were two reasons why I had to install them. First, after installing the large wheel pants I must of experienced a "tolerance build-up" problem because the brake pivot point was too far away from the tire. Then after I installed the smaller tires per Norm's suggestion printed in Q-Talk I needed about a one-inch spacer added to the shoe.

First I tried cherry blocks covered in fiberglass. Second was the phenolic blocks. Then just plain black walnut. All of these quickly wore down. In the process the tire tread wore a pattern in the attached shoe. This pattern had a sharp tooth edge where the groove in the tread ran. As a result, if left unattended too long they would cut thru the rubber in the groove.

I decided I needed something softer but yet grabby. The best idea to date has been from the lugs of an old tractor tire. After about 15 minutes with a hack saw I had two fine blocks of rubber cut from an old tire, the sandbox never noticed. After some shaping and hole punching/drilling I could bolt them to the aluminum brake shoe.

I have found that they actually work well. They do not cut into the tire after wearing down. Whereas, with the wood or phenolic I had to regularly cut off the sharp edges with my Dremel. The tire lugs do not require that effort. Also, they stop as good as any other option I have tried to date.

I would think that anyone interested enough to build a Quickie should be willing to buy and read back issues of Q-TALK. I remember before my test flight I read them all twice, at least. Yea, it might be a lot of money to buy all the back issues, but we did! And it was worth every penny.

For the curious caller that has not yet made the purchase perhaps an information package that would include a couple newsletters, references of magazine articles about the Quickie, and some local QBA members names. Some of us could volunteer to handle a few of the local questions. Say for example it was a condition of membership that local names could be given out only by yourself when an interested builder called from within a certain distance of your residence, i.e. 100 miles, contacted you. I enjoy finding an occasional excuse to talk about my plane to someone interested enough to listen. But I can certainly understand your overload condition. Especially after the good press recently, saw your letter in Kit Planes.

Enjoy the cool weather.....climb rate is great.....Twenty horses is plenty of this lightweight!!

How the flip are you? Thought I'd see your smiling face at OSH this year, but things got very charged up in the ultralight area.

...I think that you are 200% correct in not giving gratis support to recent project buyers...

The idea of a HOW TO column in QBA is really great. But, since this is an area where nearly all of us have NO technical expertise, it would be wise to get the concurrence of a knowledgeable AIRPLANE plastic professional who is qualified but has no ax to grind...

Problems such as the one that was only barely mentioned, but of utmost importance, is the balance of control systems in re-powered (OVER powered) Quickies. Just look at what Burt (Rutan) went through on the little, narrow-chord elevators and small ailerons to achieve mass balance and you begin to get the picture. When you get to 150 mph, you are no longer in a simple toy, you are in the area of real aircraft where real problems with flutter come on REAL quick. Although this is a well defined problem, it takes real engineering to overcome it and this is a worthy task for an aeronautical engineering graduate school, not us low speed tinkerers.

And speaking of problems, 1990 was a terrible year for TEAM (Harold has been deeply involved in the development of the successful TEAM series of ultralight aircraft since inception) as we couldn't keep the factory mini MAX's flying. Why, you may ask? Rotax disease, that's what.

It turns out that any Rotax used in factory demonstration service MUST have the heads and jugs pulled and the pistons and rings especially cleaned every 50 hours to get any kind of reliability. Nearly any retrofit electronic ignition is better than factory, which should be checked every 10 or 20 hours. The 50:1 oil mix can be any oil, and the plugs can be quite a number of different brands, but you must pull them for inspection and gapping at 10 hours. DON'T just clean them if they are dirty - find out WHY, fix it and put in new plugs. The carbs need to be jetted according to type of flying and air temperature. Also check the floats regularly as the guide pins in the float bowl wear the float ferrules, allowing the floats to cock, changing the float level and causing you to have fond thoughts of the Onan. It is possible to get 100 hrs between top cleaning if pure synthetic oil is used and the aircraft is flown in a very easy manner. That is risky, for one the rings freeze in the grooves, you stand a good chance of blow-by, loss of power, carbon, then scoring of the walls followed by a stoppage. The best solution is to get a handful of plugs, cylinder head and base gaskets, a torque wrench, spare float chamber and floats, spare main needles, the Rotax manual (such as it is) and do a top after fifty hours. Carefully examine the condition of everything, clean it carefully, reassemble and test it. Get to know the engine, keep an eye on it, and the CHT, and trash it after 500 hrs. Yes, you can get it bored, get new pistons and rings and a rebuilt crank, but then you would have an old, rebuilt engine for the cost of a new one. Some choice!

TEAM is working on new models...with a swing out engine mount to allow servicing the points on the Rotax. Of course, such engine mounting would be adoptable to Quickies and I will get working on the Quickie version.

I still fly Quickie VH-LQI as often as I can afford ... petrol is not far from $1.00 per liter. The Q-1 is just a very nice machine to fly. Strong cross winds don't worry me at all.

Back in April, 3 fellows and a test pilot from our CAA showed up to test my Quickie. The test pilot flew it in "dead calm" in spite of nearly 25 Kg over-weight at take off. He was gone nearly an hour. He said it is a little gem, and did all the stalls, dives, etc. He did a fair job when he landed and said he would rather not do the takeoff and landing tests as he did not know how to slow it down and did not want to give me some wrong distances. So he wanted me to do it. They set up the camera where they thought I'd be at 50 feet and were too far off to even get me in the camera. Landing distances the first time from 50 ft. was 80 ft. and then about 50 ft. every time after that. To save time, they wanted me to take off, do a turn about 200 ft. and come in to land over the 50 ft. height. They told me to "break the law". I had to do 10 of these where they put a mark at every stop. They were surprised a 66-year-old farmer could fly so precisely. When I bring the speed down to 60 knots, I can feel the wing sag slightly and know I have far more drag. At 50 ft. high I throttle off and immediately sideslip to just off the ground with no speed increase. As I want some good figures on my certificate, I fly it onto the ground right there and brake fairly hard. My brake pads have a piece of grinding wheel for wear pads - they are always effective. On the 10th landing, both tires were smoking (it was a warm day on a sealed runway).

The officials complimented me on the test and said the certificate, first in type in Australia, would be posted next week. It is now several weeks later and the letter has not come. Such is the way with RED TAPE in Australia.

On the 400 mile trip home, I could land on a pencil line with the windsock straight out in a cross wind.

Here are some of the construction details of the Jinx Hawks/Brock McCaman engine mount for the Rotax 503's that they both used. 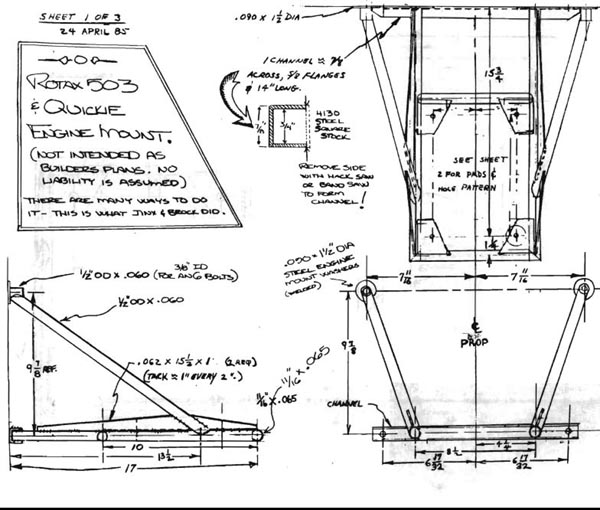 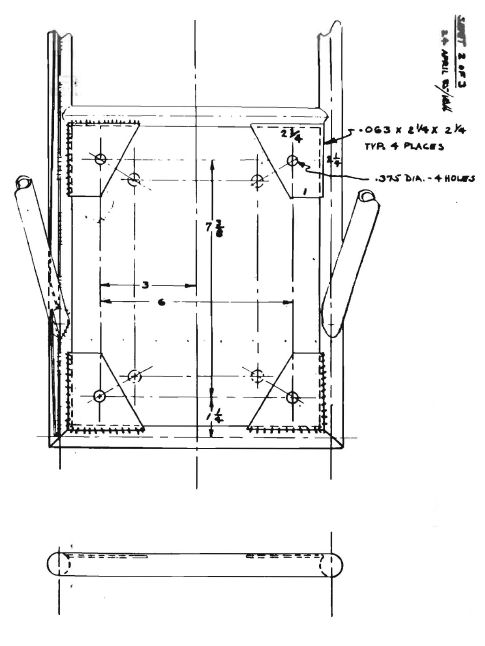 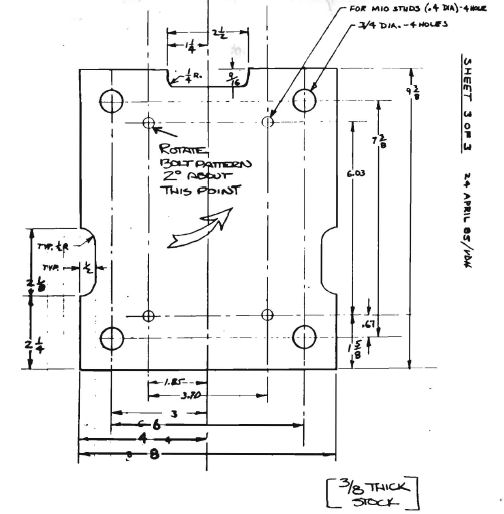 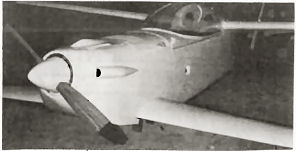 The only thing I did differently from Jinx on the engine mount is the use of only 4 plies of BID for the top reinforcements as I have mentioned before. The mount itself is just like the drawings except I used 3/4" tube where he calls out 11/16. I did not make an entire 3/8" mounting plate like Jinx did, but rather used two 2" wide by 3/8" thick bars I got from LEAF. They have worked just fine.

This is short ... I know. I will provide some more details in my next letter ... along with some drawings that will hopefully make sense. Take care and let me hear from you. Sincerely, 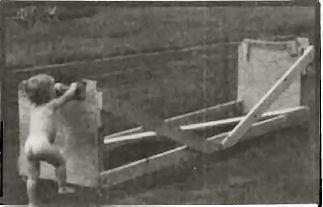 Call the guys back from coffee, Daddy. I'm bringin' the jig back in now.

You can order a PDF or printed copy of Q-talk #26 by using the Q-talk Back Issue Order Page.