This report is long overdue, but there have been extenuating circumstances. My decision to build a Q-2 was made in January of 1981. My initials are M.B., hence the tail number N181MB.

Kit #22041 arrived and was started in August of 1981. I experienced the same frustrations of other first time builders; missing and back ordered parts, duplication of parts and broken promises. But all these delays were not bad. They provided time for changes in building techniques and modifications to the kit, i.e., LS(1) mod. canard, reflexer and untold changes due to Q-TALK ideas. Unfortunately, I was too far along at the time the 0-200 came along, or so I thought, and besides the Revmaster had already arrived. So I added the 75 horse power heads and moved ahead with the building process.

I think this would be a good time to present some personal credentials so fellow QBAers can evaluate the amount of credibility to be placed in my following comments about flying the Quickie Q-2.

Like many of you, as a kid I began building model airplanes first from cutouts on cereal packages and later progressed to rubber band balsa kits, then to gasoline powered free flight and U-control stunt planes. As a high school senior, I worked as a bus boy after school. I slipped away on Saturdays and took flying lessons. After four hours my instructor told me I would need my parent's consent before solo. My parents were upset, not because I slipped away for flying lessons, but because I did not share my intentions with them. During my fifth hour I soloed and thus began the long trip through a myriad of tests and licenses that would lead to a career in aviation. The jobs were varied and many: dropping boxes of sterile flies from a Cessna 172 during Florida's Screwworm Eradication Program, spraying for fruit flies and mosquitoes in a Beech AT-11 and C-45 with a 300 gallon spray tank, hauling cucumbers from the Bahamas in C-46's and a B-17, corporation chief pilot and personal pilot to the playboy CEO, just to name a few. But for almost 26 years I flew for Eastern Air Lines, Inc.; Super Constellations, DC-7B's, B-720's, DC-8's and type ratings in B-727, A-300 and L-1011.

On March 3, 1989, although I did not know it at the time, I had just flown my last trip as a L-1011 Captain for Eastern. At 0000, March 4, 1989, I joined my loyal ALPA brothers as we honored the picket line of the IAM along with the TWU and effectively shut down the airline.

In August 1989, with savings running low and a son still in medical school, I elected early retirement to assure being able to meet my upcoming financial obligations.

Completing the Q-2 project became the transition from strike and picket line to retirement.

N181MB was moved to Fort Lauderdale Executive Airport for final assembly. The first taxi tests were begun after certification in February of 1990. One of the first changes made to improve ground handling was to change the angle of the QTW3 weldment so the pivot bolt AN3-22A would be vertical. The fiberglass tail spoke had previously been replaced with a 3 leaf handmade spring that works nicely. Main gear toe out was as per plans. In retrospect perhaps some thought should have been given to setting in a couple of degrees of negative camber at the same time to off set the positive camber created by the weight of the aircraft engine and passengers. Over the next few weeks I spent over two hours performing high-speed taxi tests. Toe brakes, as per the Tri-Q, had been installed initially and proved to be a bit sensitive and required a little time to master despite hundreds of hours of previous tail-dragger time. I strongly recommend spending this time. Not only do you gain experience in directional control, but you also are developing a sense for your position as it relates to attitude of aircraft and height above the ground. This will prove to be invaluable when making those first landings.

At sunrise, April 30, 1990, after double checking center of gravity, carefully loading fuel so the C.G. was exactly in the center of the flight envelope, running a Bernoulli check on the air speed indicator, re-reading the Quickie flight manual, visiting the tower and fire department to brief them on what was soon to happen, I was at last approaching the moment of truth. Previously I had a conversation with Scott Swing about what to expect on this first flight and I had reviewed all QBA newsletters. 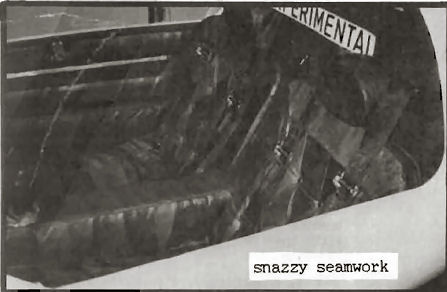 I had managed to climb to and maintain 600 feet on the down wind leg for Runway 8 and with reduced power the cylinder heads were cool and EGT's cool, but the oil temperature was on the peg at 260?F. A number of things were running through my mind as I turned a short final. My last flight had been in a Lockheed L-1011. At touchdown in the 1011 your eye level is 85 feet in the air. I reminded myself not to flare too high. The air speed I had noted at liftoff was 70 mph times 1.3 would be about 90 mph for final approach. I was now at 120 mph on short final and trying to get it slowed down. The approach end of the runway passed under me at just below 100 mph and I flared too high. A series of pumping actions followed as I felt for the runway surface. Finally I got the tail wheel on first. The canard was still a couple of feet in the air when it stalled. The landing was firm but acceptable. The brakes were fairly ineffective. I used up over 4000 feet of the 6000 foot runway before reaching taxi speed.

The next few months found me changing baffling, adding blast tubes, changing oil, disassembling the entire oil cooling system looking for restrictions. But each of the next four flights was similar to the first. Oil temperature was just too high. I called the Revmaster factory and was told that in one other situation like mine a plug had been left out of the oil pump during factory assembly that allowed the oil to bypass the filter and cooler. I was instructed to, "remove the face plate of the oil pump and withdraw the two pump gears. As you face the engine look inside the oil pump and at the 4 o'clock position there should be a 5/8" hole. This is the oil pickup point. Now look to the left side at the 10 o'clock position and if there is a hole here it should be closed."

Bingo, there it was. I had an aluminum plug made and pressed it into the hold, then staked it.

Next flight showed great improvement with oil temperature in the yellow but controllable with throttle.

I next added another blast tube and wrapped the crossover exhaust pipes with exhaust insulating wrap. There was little or no change in oil temperature.

I began digging back through all my Q-TALK and Quickie newsletters and found in Q-TALK, Sept./Oct. 1988, Number 11, page 13, the solution to all my problems, even the brakes. I can only think that in the building process one can become so engrossed with the work at hand that one tends to focus on those problems and expend less concentration on areas that are not of immediate concern, or on work already completed.

I used John Schnackel's method and cut off the two cross-over pipes, plumbing them into a duel header for the right side and blocking off the holes in the left header thus producing a duel exhaust system. I then re-wrapped all the pipes with the insulating wrap. Oil temperature at 3100 rpm stabilizes at 210?F to 215?F and as more time is accumulated on the engine I am hopeful this will drop a few more degrees.

Next on the list were brakes. They were modified as per the plans submitted by Bob LaRue. This was a great improvement in both handling and more effective stopping. The later plans, Q-TALK, July/Aug. 1990, Number 22, page 6 by Quentin Durham, appears to be a better plan because of the stabilizing effect of the axle attack point and welds.

Number one cylinder is running a little hot both head temperature and E.G.T. This will be the next problem to solve and then get that 40 hours flown off so I can get to Sun n Fun in April.

I am enclosing a copy of an article that appeared in the Dragonfly Builders & Flyers newsletter under New Products Department and also a few pictures of N181MB. Yes, that interior is real leather. I picked up scraps, by the pound at Tandy, and used an old Slantmatic Singer to sew it together.

You can order a PDF or printed copy of Q-talk #25 by using the Q-talk Back Issue Order Page.