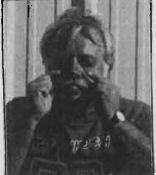 If a person MUST get to an air show by driving, doing it in a motor home HAS to be the best way. This year QBAer Tom Gordy's buddy, Chuck Hanford, traded up from his rather "spartan" van which took us to San N Fun '87 to a 1971 Winnebago, a bit worn around the edges.

The trip to SNF '88 was another 24-hour marathon. At 2 am on a dark moonless night as we rumbled along on a black southern Alabama washboard known as State Highway 172, my back was getting an unwelcome massage in an aft bunk while I was fitfully trying to get some sleep. As I tossed around cursing my discomfort, I found myself imagining I was in the midst of some giant red funnel. All over America (and even beyond!), sport plane nuts were in the funnel with me all slowly, relentlessly converging with each other at the outlet: Sun 'N Fun, Lakeland, Fla. Were they all suffering (more or less) in silence (more or less) like me? No doubt! Somewhere in south Georgia 2 guys were sleeping in a strange fleabag motel after their 12-hour PA to FL flight in a restored Porterfield was interrupted by a tornado watch area that developed smack across their flight line. A Toyota loaded with camping gear was cooling down in a Pensacola rest stop while its driver tried to rejuvenate his blurring highway vision with a half-hour nap in the damp, chill air. High over the Atlantic a jumbo jet was droning along its course delivering, among others, an enthusiastic English couple to Miami's beaches. They still faced a shuttle flight to Orlando and then a drive through all the roadside citrus stands to an airport they'd only recently heard of.

These travelers and thousands more will have endured solitary and unappreciated discomforts, will have sacrificed untold funds and will have struck all manners of bargains with their families, friends and work supervisors to get the necessary time so that they can brush themselves off, wash themselves up and arrive on the flight line to adoringly and jealously admire the handiwork on your homebuilt aircraft. Those of you who made the enormous effort to finish your aircraft and the sacrifice to bring it to the show, any show, anywhere, should be doubly proud and satisfied. And when the next new inquisitive stranger arrives asking the same litany of questions as the last, be patient and think about the effort he must have made to see you. And think about the effort all of us will make to see and be at OSHKOSH.

Sun 'N Fun reminds me of my early 70's visits to OSHKOSH: relaxed friendliness, an unhurried air. I imagine EAA's Rockford days were like that. The FAA has not yet tightened the screws on the Lakeland fly-in; fly-bys still occur over the edge of the crowd affording good picture opportunities. Strolling around the grounds is safely but not tightly controlled and one can see plenty in 3 days. Six Q's showed up this year though none were Quickies. There was an interesting Tri-Q with gear designed by the owner before Swing had his to market. It is one of a stable of 5 Tri-Q's, all Revmaster powered, from Springfield, MO. All 5 have the anhedral left in the canard, and, except for a builder-induced fuel starvation accident, all 5 are flying just fine. Scott Swing was there with his fine Q-2 now Q-200. Mike Dwyer, a St. Pete local was in and out in his nicely worn Q-200, indicating a lot of hours and lots of miles of cross-country enjoyment for him and his wife. Russ Cowles brought his Q-200 in from Lake Jackson, TX; another bird with lots of cross country miles and many hours. Bruce Brown had his flashy yellow Revmaster Q-2 in from south of New Orleans. He's been flying since '83 and had never seen another Q-2 until Sun 'N Fun. Bruce admits to having tried a number of aerobatic maneuvers in his, including (gulp!) loops and hammerheads. He entered the Sun 60 race and turned in a respectable 160 mph average speed.

A locally base aircraft, brought onto the flight line for the show, experienced a "static mishap". During the previous week's initial flight testing the aircraft departed the runway and when the dust settled the tail and left canard root were damaged. The builder patched things up and quickly and neatly sprayed black primer just in time to get the bird on the flight line on the bright, warm Saturday before the opening on Sunday. By sundown Saturday the canard had skin ripples in the black area. Black DO get hot. Lucky he has a carbon spar or he'd be building a new canard. Several of us felt simultaneously a white and yellow airplane parked side-by-side and could feel the distinct heat difference even in these light colors.

For the first time, I blocked out some time for 2 QBA meetings at the flight line tent. 15-20 came the first day and 10 on the second. It was small and cozy, but the information was flowing in torrents. The few Quickie guys that showed felt lonesome, I'm sure, as the talk was exclusively Q-2/200.

To those of you close to the end, hurry up and finish reading the rest of this thing so you can get back out in the workshop and start the full court press so we can admire your work at Oshkosh. Once again we will have our Saturday evening (8 o'clock) forum "revival" tent meeting of all the faithful. Say Hallelujah, Brother!

And finally, this issue is dedicated to my wonderful wife Mary, who when she noticed me off-schedule, heaving great sighs of un-motivation and jumping in and out of the office with the attention span of a gnat, would sometimes stop me in mid-flight, turn me around and gently shove me in the direction of the keyboard I was making great pains to avoid. Sometimes it's EZ, sometimes it ain't!