From the UNITED METHODIST REPORTER came the following article:

"What Some People Won't Do To Get Closer To God Now That the Rev. Darrel Aleson, co-pastor of Williston Charge has built and is flying his own 'experimental' 2 place aircraft, there may never be an end to the questions or the jokes! 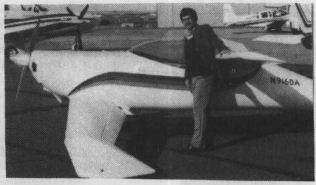 There's the jibe "Hey Darrel, don't you remember that Jesus said, 'Lo (LOW?) I'm with you always!'" Or: How about the Psalmist when he said (138:6) "For though the Lord is high, he regards the lowly."

Darrel says he's heard from most of the skeptics by now. He adds that he doesn't deny the charge that flying brings him closer to his Creator: "That feeling is certainly there. Besides, my Creator is the only one who will ride with me...so far (15 flights)."

Building the 2 place, 64 hp., 180 mph. aircraft is the culmination of a life long dream of Pastor Darrel, who also built "umteen dozen" model airplanes as a boy. The Q2 required about 2 years of time to complete along with generous patience and understanding from spouse Deborah and congregation. Besides being tremendous fun to fly, this fast and efficient airplane is expected to be a valuable tool for transportation to various conferences and meetings related to the church. As this is written, the Q2 has flown 10 hours. "So far, the Bishop and the Governor of North Dakota have expressed cautious interest in rides, when the plane and pilot have proven themselves," says Darrel. "Just wait until spring!"

After about 950 hrs. of work, Q2 #2045, known to the FAA as N916DA, passed final inspection. Three weeks later, at the end of June, I added another chapter to my diary of great thrills in my life. No, I did not make first flight...at least not as planned. I had the not unusual thrill of inadvertently becoming airborne while doing fast taxi runs on our 6100' runway. I chose, in a state of surprised panic, not to continue the flight. A hard landing to the side of our wide runway connected my left canard with a runway light and did neither object any good. A broken canard, propeller and ego are not very pretty. After working through my grief, I made plans for repairing the canard and consulted QAC and others. End of this sad beginning: N916DA was declared airworthy again by mid-August. My initial goal was to at least have the engine started again and taxi on the new canard before Oshkosh. We made it with one day to spare. I honestly believe that my repaired canard is stronger than the original.

THE BIG DAY: After successful repair and extensive taxi-testing (also known as pilot confidence building), Oct. 2, turned out to be about as perfect a day as one could desire for first flight. With spouse Deborah, kids Wendy and Josh, plus just a very few friends in attendance, our Q2 (which had progressed from basement and family room to neighbor's garage, to friend's warehouse to another friend's heated hangar and then to another hangar at the "big" airport) finally left the nest. FIRST FLIGHT! There is no describing the combo of exhilaration and fear, but this time the pilot was ready. The flight lasted 20 minutes, with a good "1-hop" landing right on the centerline. One witness on the ground commented: "Sure is a fast little bugger, isn't she." (How does he know it's a "she"?)

To date I have made 18 flights in N916DA. Basically she is a dream to fly! A little re-rigging on the elevators to counteract the right wing down tendency at higher speeds is the only adjustment I have needed. (Yes, I did say "right" wing down.) At level flight, my elevators fair in perfectly with my fillets. I have had no problems with keeping my tailwheel on the ground during takeoff roll or tail first landings. Liftoff at 2950 rpm comes at 68-70 mph in about 650'. Touchdown seems to be about 66-68. I feel that my ground handling is excellent, but treat this bird with all respect due a taildragger...or else...! My controls are smooth and responsive but not overly sensitive. I think I'll be close to all the advertised numbers on speeds. Top rpm has been about 3100 but 2800 feels real comfy! I'll be the first to say I've been real lucky in how things have fit together in my project. I also surrounded myself with good and knowledgeable friends who gave both help and encouragement. Gratitude is really an understatement! (Sure wish QAC would act more like a caring friend!)

I'm far from expert on most anything mechanical and my experiences were not all positive, but I'm having too much fun flying now to feel like being negative. Hope my experience can shed some light at the end of the tunnel...just like some others did for me.

You can order a PDF or printed copy of QuickTalk #23 by using the Q-talk Back Issue Order Page.