Its been a while since my last communique and much water has passed under the bridge. I'm highlighting my experiences now only because at least one is a true safety of flight issue, relating to loss of power.

A brief history of my project follows:

- the 500 hr project finally reached approx. 2500 hrs and first flight occurred in July '84. I had no problems with QAC that didn't get solved sooner or later.

- N21SY weighed in at 610 lbs. The extra weight is accounted for in large tires, H.D. battery, Maloof prop, larger spinner and modified cowl to accommodate it, full house antennas and a good overall finish.

Handling dynamics uncovered no surprises. Take off was in 500 to 600 ft at 65 mph, climb about 1200 fpm at 90 mph indicated. There was a noticeable tendency to turn to the left. Aileron steering on the ground was very pronounced at 40 mph + and was frankly disconcerting (Ed. Note: see Ismari's letter for a suspiciously similar occurrence.) I keep the stick centered unless a crosswind dictates its use. Long final at 90 to 95 felt good and I pulled power on short final for 75 over the fence and about 70 on touchdown. A slower touchdown may be possible but will require some power and the nose high attitude will not be comfortable for pilots with no "tail time". Ground characteristics, especially at speed, are real "taildragger" and the rudder/tailwheel is sensitive. My 50+ hrs in a Cessna 120 and Bakeng Deuce were handy. Don't attempt solo flights in a Q-2 without "tail time" sufficient to feel comfortable with fast INSTINCTIVE footwork. Go easy on the brakes until you're sure they both pull evenly. Equal tire pressure, and therefore the moment arm to the ground, is mandatory.

With 15 gal. of fuel and solo, UP reflexor was desirable. I consider the reflexor a mandatory feature.

My Revmaster has the 75 hp heads and a "smiley face" inlet on the cowling. The first set of heads I rejected due to the visible cracks between the valve seats. The second set had only one crack but Revmaster's opinion was to use them, which I did. Blading the engine indicated uneven compression, but I ignored my better judgment and experience thinking they might come in.

First flights were short due to indications of possible overheating, but after 1 hr of accumulated time it was clear that the engine was not right. Neither were the inlet and outlet area dimensions, which were supplied by QAC and Revmaster. A leak down test revealed that all valves were leaking, especially the exhausts. Numbers were so low that I am amazed the engine even ran.

The heads were pulled and valves disassembled. All 4 chambers showed a small crack between the seats (only one had a crack when received), and all the exhaust seats were clearly not mating with their valves due either to incorrect manufacture or warpage (thought I believe the first since the compression never did feel right from the start). Arriving at Oshkosh '84 sans 21SY, I took issue with Revmaster. A conversation with Joe Horvath more or less concluded a quality control problem with both metallurgy and in house "processes" (head employees). I also found out that the valves weren't lapped at assembly (a fact I didn't believe).

My third set of heads arrived in early October with valves unassembled per my instructions. Exhaust valves appear slightly smaller; more metal exists in the area of previous cracks. The seats appear to have more mass and workmanship was noticeably improved as well. I hand lapped and installed each valve, confirming fit by checking for solvent leaks. I installed the new heads using blue form-a-gasket on every sealing surface (except head/cylinder) and have no leaks - FINALLY.

Compression is excellent - 80/72 on all cylinders with the only leakage past the rings which are still seating in. The engine SOUNDS good. I strongly recommend the leak down procedure. A tester can be acquired for about $30. It will tell you a great deal about your engine very quickly.

Now my main reason for writing - AND I BELIEVE A CRITICAL SAFETY OF FLIGHT ISSUE. While calibrating the Rev-Flow carb to the new heads (some "needle carving" required), the engine suddenly started acting lean and got worse in spite of two needle position adjustments until it would not take throttle above idle (which had jumped from 900 to 1500) and finally died. Investigation found that the die cast cap on the needle had come loose and the needle remained stuck in the needle jet - the needle and slide had parted company! Had this occurred another engine hour later, I would likely have been airborne. The consequences would have been most unpleasant at best - the Q-2 is not a "hayfield" airplane. 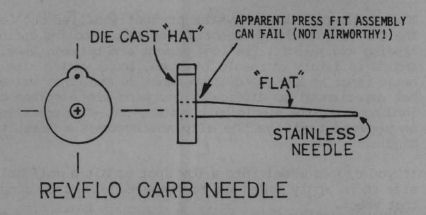 The die cast "hat" showed no obvious method of attachment to the needle other than a close fit. I am able to overcome the friction by mere hand pressure. I am an engineer, self employed as a mechanical designer, model maker/machinist, consultant et al., and for the life of me I can't determine what forces could have caused the parts to separate, but separate they did, and I am appalled by the lack of integrity in the joining process used. I recommend immediate grounding of any Rev-Flow equipped aircraft until the needle assembly is changed. My solution is to make a duplicate "hat" of steel and heliarc weld it to the needle. (Ed. note: see the following response from Revmaster.)

Instead of grounding all Rev-Flow equipped aircraft as suggested by Mr. Paul Yarnell, we suggest removing the needle from the carburetor prior to the next flight for a pull test as follows:

Prepare a retaining device by drilling a hole in a piece of steel with a #29 drill. Clamp the retainer in a vise so the needle hangs vertically through the hole suspended by its head. Then wrap the needle with masking tape for its protection and tie a 40 lb weight to it. Be careful that the needle head is not forced to rotate, as this would affect its strength. If the needle does not move it is OK for service. If it moves, send it in to Revmaster for an exchange needle.

Tests at Revmaster indicated that the early method of head installation is suspect, requiring only 15 to 20 lbs of pull to remove the head. Removal of the (new) swedged needle required 100 lbs of pull. Tests with this needle using cockpit throttle control show that by clamping the needle in the throttle body, the force on the throttle would not pull the head. About 40 lbs of push would only stretch the throttle cable without pulling or removing the needle head, although the throttle handle was fully seated against its stop in the cockpit. When the vise grips were removed, throttle and needle operated normally.

It is quite important that any time throttle pressure should exceed just a few pounds, an immediate inspection should be made prior to the next flight to determine cause. Normal operation of the Rev-Flow is quite smooth and light under all engine conditions. A force of less than .5 pounds is required to operate the throttle arm plus whatever cable friction is present.

We appreciate Mr. Yarnall's letter bringing his problem to our attention enabling us to immediately establish the above test and remedy.

DIFFERENTIAL BRAKES FOR THE Q-2

The single pull brake system presently called out for the Q-2 is considered essential for safe handling during landing and takeoff. The long moment arm between wheels and CG is likely to result in ground loops with a single brake input at any speed above about 30 mph. This writer has experienced no difficulty stopping the airplane on landing using the single pull system, but when operating on unpaved taxiways the airplane becomes a beast to handle.

If you drop a wheel into a low spot or hit a golf ball size rock, apply power and be prepared to rotate about that wheel.

While in total agreement with the basic safety of single pull brakes for landing, the narrow unpaved taxiways at my local airport dictate some sort of differential brakes for taxi. The following system has been installed in N419Q: 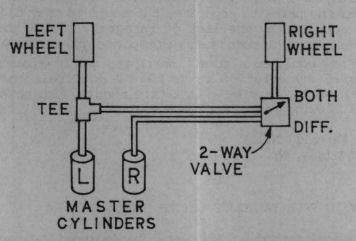 If the master cylinder has already been installed in the left console, it is only necessary to install the second master and 2 way valve in the center console. This would be a bit awkward when simultaneous operation of left brake and throttle are required. My choice was to install both masters in the center console and to install microswitches actuated by the two-way valve and my parking brake. The 2 switches are connected in parallel so that a closed circuit to a red panel light is provided when either parking brake is "on" or the valve is in the "differential" position.

1. Try using the two-part urethane Insta-Foam, supplied by Wicks and Aircraft Spruce to attach foam cores together and to join to the carbon spar of the new canard. This is much lighter than Micro and adhesion is very good.

2. I built the new canard according to plans and wish I hadn't. I found the new canard to be much more flexible than the old one. This is not good because if you drop it in on landing you will bounce very high, come back down, and if you don't add power quickly you will most likely break your airplane. I highly recommend more than one spar cap on top and bottom. Another problem with the thin skin (two UNI at 45 degrees and one spar cap) is that if you kneel on your canard you will leave a dent in it.

You can order a PDF or printed copy of QuickTalk #18 by using the Q-talk Back Issue Order Page.