1. (Page 9-7) I, too, thought the Quickie plans' method of turning the worktable 90 degrees nose down to glass the shear web was cumbersome, so I mounted my alignment templates on hinges at one end and just rotated the wing and canard assemblies. 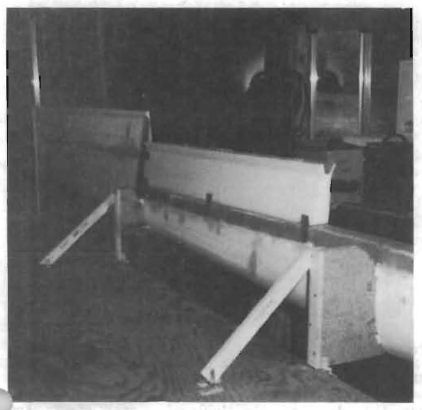 2. (Page 19-1) When curing my wing and canard, I inserted a small (1/8" dia.) meat thermometer into the foam immediately under the fiberglass. I achieved 140 degrees. As others have done, I used water soluble paint and hosed it off after completing the curing operation during the summer.

1. At 65 hours, the ES6 motor mount cracked from the bolt hole (top hole) upward. Also, the gearcase cover of the Onan broke above and around the top right Kevlar attach bolt hole boss, causing an oil leak.

1. (Page 9-9) When glassing and mounting the wing, leave the tip square. You then have a ready reference to WL15 (WL at wing tip will be parallel to WL15).

2. I came across someone saying they needed some way to stop the wheels from rotating in flight. To solve the problem, I epoxied a small wooden wedge (off a 1x4) onto the top of my gas tank with the back edge rising about 1-1/2" and tapered forward. Then I took a small bungee cord (about 1 foot long & 3/8" dia.) and attached both ends to the brake cable. I then looped a nylon strap through the bungee and tied the strap ends together about 6"x8" back from the bungee. Now the nylon strap can be looped loosely over the wooden block until such time as you need to apply brakes - in which case you simply grab the strap and pull. Or when you want to stop the wheels from rotating in flight, you simply pull the nylon strap and loop the bungee over the block. Now you have, in effect, a parking brake. This keeps the wheels still in flight and if you forget to release the brake before landing (as I have done), it doesn't really hurt a thing. I even forgot and took off with it on one time.

1. Like the fellow that had a forced landing because of dirt in the carburetor, my Quickie had a like problem. From the very first flight, every check for sediment showed a few grains of debris in the fuel. I thought it was stray dirt that would clear up in time. Many changes of the filters and about ten hours later, it finally struck me that the gas could be dissolving the foam because of a small leak. So, I cut a big hole in the gas tank top. The cut was made on a bevel so the plug would not fall in the tank when replacing it. I painted the entire inside with two coats of Randolph No. 802 Sloshing Sealer. The cutout was then covered and glassed. This definitely sealed the tank. No more debris.

1. (Large wheel option) If you followed the plans to find the tires rub or won't fit; instead of doing the wheel pants over, I am using 4.10/3.50 x 5 tires. The only change required is to move the brake holes. This is a smaller tire than the 4.00 x 5 and has the needed clearance, but handles well on grass.

2. To prevent the wheels turning in flight causing vibration of the canard, I use a large rubber band (cut from an old inner tube) hooked onto the brake handle. The other end is hooked to my safety belt after takeoff with a small clip. Caution: The rubber band should be loose enough to allow the wheels to rotate in a slight dive, thus preventing a flip-over on landing. I unhook the rubber band on downwind as part of the pre-landing check. I have landed with the arrangement connected, but I don't recommend it.

3. (Page 12-2) I started using Amoco super low lead fuel and after about six months the plastic gas sight tube clouded up. On removal, it was soft inside. I replaced the tube with glass, like the sight gauge on a large coffee urn.

1. I broke one of the 5/16" bolts on the Kevlar plate at about 140 hours on the engine. It broke off flush with the case under fatigue. From now on, I plan to remove the engine every annual and replace these bolts every year. Also, the bottom bolt from the Kevlar plate fretted with the nut and destroyed both of them. These are obviously vibration related problems, which I constantly struggle to minimize. Don't ignore those oil leaks or increases in vibration. Also, much grief can be saved by applying flexible Permatex to the spacers between the engine block and the Kevlar mounting plate. I didn't realize the mount bolts went through the case and started leaking oil at about 70 hours, requiring the above sealing operations.

1. After two years and over 150 gallons of gas, the fuel tank on my Quickie sprung a leak. Analysis revealed a pinhole apparently plugged by paint. After two years, the paint failed! Moral: Never take anything for granted.

1. (Page 15-1) After cutting my canopy from the oversized one supplied, I found it a difficult object to handle. A good way to hold was required for final trimming. I used the box the canopy came in as a worktable. I padded a 1x2 board and used two "C"-clamps to secure the side I wanted to trim, to the side of the box. The "C"-clamp pulled the canopy up snug. The box and the padding were soft enough to insure no damage to the canopy. I also used the flat side of a half round coarse file to peel away the rough Plexiglas cut line. Finally, sandpaper was used to round off the edges.

2. (Page 15-3) I found the Bondo and board method of pushing the canopy to the stiffeners unreliable. The boards tended to break away from the fuselage side. Instead, I drilled four holes in the fuselage, two on each side. A 1x2 board was bolted at each of the hole locations. (See drawing) I drilled a hole near the top of each 1x2 and inserted a long wood screw for pressure adjustment. Next, a 1x1 was used against the canopy to push it in. Cut off roofing nails are placed in the 1x1 where they will be contacted by the adjusting screws. This allows the adjusting screw to exert pressure against the 1x1 (and thus the canopy). This method worked well, leaving only four small holes to patch.

1. My 22.5 HP engine runs leaner with the cowls on than it does with the cowls off. Perfect tuning requires an exhaust gas analyzer. I have sealed the jet settings and the low idle with model dope to show if they have moved or been tampered with.

2. There is a 4-micron Balston filter in my fuel line so the fuel is clean, truly clean.

3. My static thrust is above 100 LBSF when the engine is running well.

4. I check the cylinders with a 40-PSI airline fed into the plug holes at every 25 hour check. Air leaks (past the valves, for instance) can be heard. Soap solution or oil on top of the cylinder head gasket shows leaks before they lead to significant loss of power.

5. For people yet to fly, vibration causes a lot of wear - fast! Be sure that all wires are tightly secured and/or wrapped to protect them from chafe. Next time I would ream all bolt holes to be a precise fit. To take up torque tube slop that has been aggravated by vibration, I have used Loctite and oversize precision ground bolts.

6. Hippity-hop landings are quite educational and are avoided by precise flying and judicious use of power. One cannot simply get 'somewhere near' the ground and then pull the stick back as she settles. Sink rate can be controlled by power. Or at least be ready to feed in power and try again.

1. CONSISTENT good landings can be made by flying it in all the way, touching down main gear first. Relax backpressure when the main wheels are down. Forget the three-point or simultaneous tailwheel touchdown. The tailwheel comes down when it's ready. Absolute concentration is needed on directional control - no diversion for an instant! It seems to me that the canard and elevator will keep it flying in ground effect to the point where the elevator is deflected about 12 degrees down. The elevator becomes an airbrake and results in drag only. Lift then seems to give way and down goes the nose to a bouncy landing - much different than conventional taildraggers.

1. Have faith in using the correct engine mount spacers to reduce vibration.

2. Install fire-resistant shielding over the fuel line and ignition wires near the exhaust areas.

3. To prevent cracks developing in the exhaust stacks, we have had success with the following system. A folder stainless steel bracket runs from an engine head bolt to a secondary strap around the lower end of the stack. Also, we do not completely tighten the bolts holding the exhaust stack flange. The flange bolts are safety wired to prevent them from backing out, however. The entire assembly will move snuggly to damp out the vibration forces.