1. When fitting the top and bottom fuselage halves together, cut both sections until they fit fairly close (1/16"-1/8"). Tape one side (fore and aft) with duct tape along the cut line. On the opposite side, use a Remington (DuPont) medium "grit edge blade" made of tungsten and carbide with the blade in BACKWARDS. Run the saw through the high spots in the normal direction with the sabre saw (blade facing backwards). This will lower the halves together by cutting just the high spots. After removing the high spots, one long cut from the firewall to the fuselage joining line will insure a perfect cut. Several times along the length of the cut line will join the lines perfectly. Even if there is a wiggle, both halves will match. Be careful not to cut so much off that the fuselage halves are too short (height wise). Now do the same on the opposite side of the aircraft. Tape the side just completed and start cutting along the opposite side. One person can do this, but two people make the work much easier. This same method works for joining the front half to the rear half. Do the cutting slowly, check the line, make another cut, check the line, etc.

1. (Page 14-2) The following modification will decrease the Q2 instability in ground tracking. Remove the tail wheel assembly from the tail spring. Remove the tail wheel and take Parts A & B apart. Cut out the 25-degree angle from Part A - bend and weld. This enables the tail axis to remain perpendicular to the ground while handling. However, this also increases the angle of attack on takeoff by 1 degree. If this is unacceptable, then cut Part B as shown in View B and weld in a piece to fit. This will give back the original height. 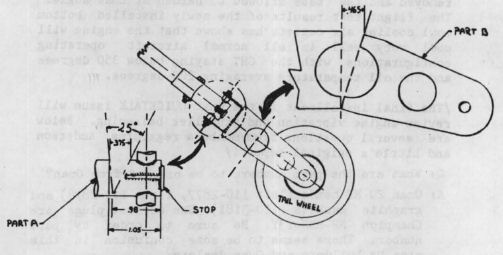 1. (Page 8-5) In order to bend the longerons, support as shown in the plans. Place enough weight on them to get the proper amount of bow, plus a little. Heat your hand iron on any steam setting and place it on top of the weights. Cover the whole structure with a piece of plastic to prevent steam from escaping (but prevent contact with the hot steam iron). In a few hours the longerons will bend. They can immediately be placed against the fuselage to check for proper curvature. If more bow is required, simply repeat the process. Once the fit is achieved, allow to dry overnight with weights to prevent any tendency to straighten.

2. (Page 9-3) The plans suggest that two layers of UNI used as skin on the main wing be cut in advance. 16 diagonal cuts 25" wide and 16 cuts 20" wide are suggested. For me, this was twice as much as needed to cover the top and bottom surfaces of the wing. Also, the cloth is extremely difficult to handle, even with a paper pattern attached. I suggest that these cuts not be made. Instead, mark diagonal lines directly on the wing cores, hold the entire roll of UNI over the wing and unroll as needed. This is easy and conserves cloth.

1. I actually found the fuel gauge (Temp TRG-0750-M) mentioned by Bob Falkiner (QUICKTALK #9) in my little town. This gauge is indeed a nice unit. It is very similar to the one Aircraft Spruce sells, but it is more compact and can be adapted to a remote sender. I never liked the idea of so many holes in my fuel tank, including a large one to insert and mount a fuel sender. I am using the Tempo gauge as follows. I removed the sealed gauge portion (2 screws), cut off the rim on top of the mechanical unit's flange and mounted the flange to the inside of my tank. I reduced the thickness of the tank in this area to just resin and glass. Since the gauge is magnetic coupled, it works just fine through four layers of glass. I intend to use this gauge on my header tank as well. I will eventually convert them (with the adapter available from Tempo) to electric remote reading using a single gauge wired through a momentary pushbutton. I will be set up to continuously monitor the header tank and read the main tank on request (at the push of a button).

3. I know of at least one builder who sandblasted (lightly) the interior of the fuselage. This prepared the surface for attaching bulkheads, etc. It does VERY LITTLE damage to the glass weave. This method could be used anywhere, even wings. From my inspection, it actually does a better job of sanding when preparing the surface. Do it outside, however, and carefully clean up all the sand and residue from the work pieces.

1. To join the fuselage quarters, I first jigged the lower front and rear to proper alignment and applied the outside fiberglass as well as the firewall. Then I installed the pads for the trailer option. With the smallest drill bit available, drilling from inside out every 2"-3" gave a 'dotted' line on which to cut. After cutting, the two lower quarters can be butted together and the plates installed. Then fit the upper rear quarter and fiberglass in place down both sides. Cut out the canopy opening very undersize just for access and fit the upper front quarter. When closely fit, the outside glassing between upper rear and upper front ONLY is done. Install the 'trailer' pads, drill the dotted line, cut on the dotted line, slide the front shell back the width of the saw cut and install the plates. NOW glass the upper front section to the lower front section (unbolt the plates to apply flox between the shells and rebolt). Install the bulkheads in the front section. A ring in the firewall exactly centered at WL15 plus a heavy wire bondoed in the tail and bent vertical allows a line to be stretched frequently for alignment checks. Use a 1" hole in each bulkhead and cross marks applied after installing. This requires a narrow slot to be cut at the vertical fin area immediately after joining the two rear quarters as WL15 is 1" at the tail.

1. (Page 8-3) Don't install the FS 120 bulkhead until AFTER you've glassed the inside of the tail cone. Peel-ply the area where the bulkhead will be mounted. It is much easier to get your body inside of that cone if you don't have to lie on that cutting edge of the bulkhead. That layup is hard enough already.