[Current EDITOR’S NOTE: Jim Masal sent me the following report from the 2012 Field of Dreams Fly-in hosted by Sam and Sandy Hoskins. He used a colorful choice of words in places, that tweeked my politically correct sensibilities. It is FAR from my place to correct the words of THE Founding Father (read OLD FART) of our little community, but my intent is to make this group inclusive. I hope you read the following in the lighthearted manner it was obviously intended.]

It’s been a long time since I eased out of my QBA responsibility but at Sam’s specific request and still basking in the glow of Sam and wife Sandy’s outstanding organization of this fly-in I feel the least I can do is limber up my keyboard and report it.

Early arrivers to the field were invited up into the tower cab for a tour and a look-see of the surrounding grass-bordered concrete. Sam Kittle and I were lollygagging on our road trip to southern Illinois from STL Friday pm so we missed it (Sam is addicted to Starbucks so we had to stop every other town for a refill, you see). 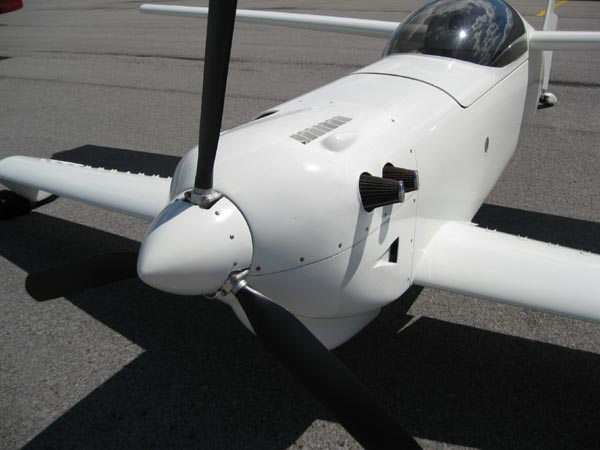 We met up with the arriving gang at the Airport Inn. Under “New Management.” Straight from Bangalore, it seemed, with no clue how to conduct American business. Hint: stay away.

Anyway, Hoskins offered to take us on a tour of the new SIU (Southern Illinois Univ.) $130+ million Transportation Campus about 10 miles away. Dismissing our complaint that we’d rather sit on the sidewalk and play Jacks, we saddled up and followed him out there. WOW. What money can do!

First we saw a 737 donated to SIU by United on the ramp with a small clot of students and Charley Rodriguez engaged in some kind of experimental work.

And then we came upon the spanking new and cavernous “transportation” training building. More than half of it is devoted to car mechanics. One huge room had about 10 car lifts and benches with flat screen computers and many roll around tool boxes. And there were other similar specialty rooms.

Next we came to the aviation section of the building. SIU offers pilot training, aircraft mechanic training and aviation technician coursework. Separate and specific roomy classrooms are outfitted for instrumentation, sheet metal bending, aircraft wiring, hydraulics, etc., etc., and I don’t know what-all. Then there is a large hangar full of jet engines, pistons, wind tunnels, a T-33, Tri-Pacer, Queen Air, helicopters etc., and god knows they may have had a Constellation tucked into a corner I didn’t see!

Back in pilot ops there was a long, curvy counter for schedulers and paper-pushers which faced high mounted screens which told of the student, assigned instructor, aircraft, time and… I gotta’ stop before I start wishing I was 18 again and applying to SIU for admission as a Saluki.

That evening we all assembled for dinner at Sergio's, a nice Mexican place. Now here I have to un-holster my wire brush. I didn’t realize I ordered a complicated gourmet dish… Caldo . . . a chicken soup. 17 people were served and taking their last bites when my soup arrived last. Now if you haven’t killed the chicken yet, just tell me and I’ll order sumthin else!

Anyway, the table was awash in conversation… and interesting enough to keep the ladies involved. Outside there appeared a hellacious wind, rain and lightning that made the fliers most happy to have arrived before dark.

The weather front moved through overnight leaving us with a brisk, blue and sunny Saturday with a few wispy ragged clouds… and what would soon turn out to be 10 Quickies on the ramp of every variety: a Rotax and Onan single, a pair of Revmaster Q-2’s and tri and td Q-200’s. And it all started with a fly-in breakfast to die for. You want eggs? We got ‘em. You want toast, coffee, milk, juice, bacon, ham, waffles, pancakes, cereal, berries, nuts; we got ‘em. You want a bunch of SIU Av. Tech guys and dolls to serve you with a smile? We got ‘em. (Being from Texas tho, I noticed these Yankees forgot the grits!). You couldn’t get a better breakfast at Dennys (tho one guy didn’t git his Starbucks!)

This was all set up in a huge hangar. Then with full tummies and with a clarion call from Hoskins, we all waddled on over to our first education session. 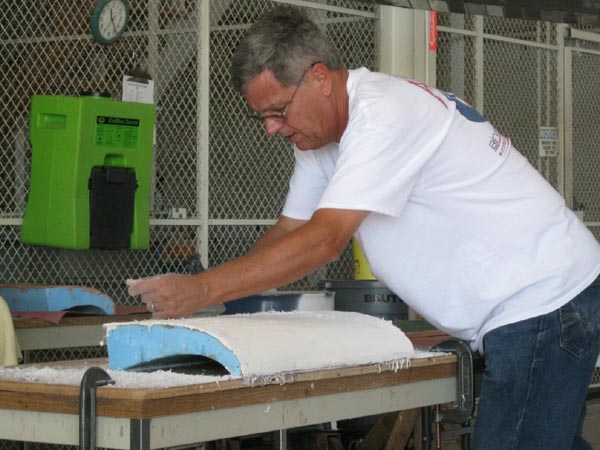 First up, Hoskins put on a first-class touchy-feely demonstration of a fiberglass sand and feel operation that takes hours, maybe days off the time most of us spent on our airfoils. And, and, and with superior results. So cool it almost makes a man wanna’ take out a coupla’ runway lights so he can repair a canard using this method… NOT. Sam says this method is described on his website, but seeing it in person (and smelling epoxy fumes is always better, eh?)

To simplify, you mix a large batch of West System epoxy/micro consistency of peanut butter, (large) trowel it on a quarter inch thick over the entire airfoil, like you are icing a cake (and it DOES look ugly) let it cure 2-3 hours then roughly level it using a Surform half-round file. Next prepare about a 3 foot straight, stiff board with two strips of 3” coarse grit sandpaper like body shops use. Scratch over the visible low spots with a carpenters pencil then cross-sand away with the long board until there are no low spots and the underlying glass layup is barely peeking thru in spots. Don’t let this cure overnight or you will have hell to pay in effort. Get right after it.

This is roughout work. Put your micrometer away. You will see scratch marks and small divots on the surface which you will treat in the next step. So… next, firmly squeegee a thin coat of pure epoxy over the entire surface, taking care not to leave epoxy ridges or drops anywhere. This will start to fill the divots and scratches and you will do this thin coating up to 5 or 6 more times to bring the divots up to level. Always squeegee the next coat while the last coat is still tacky to assure a good bond. Finally you can scuff up the last cured coat and you are ready for primer. Eeeet eees simple, no?

After Sam H. we were treated to a full-Monty, collegiate level, power point lecture about flight testing deliberations, pontifications, and operations from Sanjay Dhall who applied them to his very successful flight testing of his Q-200 which I believe is the most recent to fly. He should offer this dog and pony show to the EAA. It is that good!

I was particularly interested in his early trepidation as to whether he should even fly it at all. I remember a west coast builder with a beautiful plane who just couldn’t gather up the resolve to fly it himself or take a chance that another pilot might wreck it. He sold the airplane unflown. And for those of us who DID make our first flights, that is a sad commentary.

During Sanjay, Sandy Hoskins fetched sandwiches and chips so we could have a working lunch in a circle of tables. Each of us introduced himself, often to a cacophony of wisecracks.

After lunch the planes were dragged into the hangar and all the fliers agreed to a nice, long cowls-off session with much pointing, probing, hemming and hawing. It is excellent to note that all these Q’s are successfully flying with many hours on them and yet with so many tweaks and twists and solutions under the hood. Americans, ya gotta love ‘em.

As the hangar reverberations died down the flying and ride giving began… and the photo shooting next to the runway. 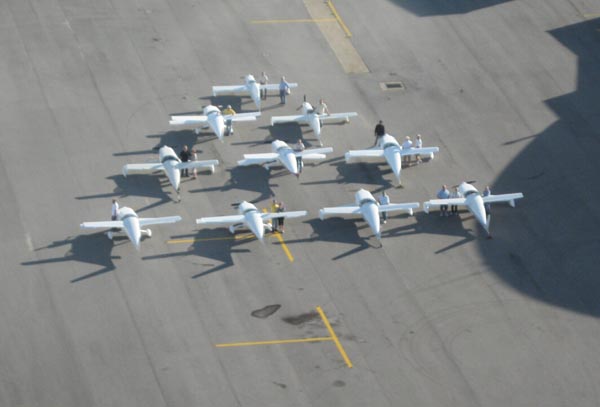 And as the sun began sinking in the west, a bunch of chiefs and a couple Indians haggled over the precise alignment of each Q so as to get the perfect photo of the entire collection. And just as Thayer perched on top of the gas truck with an armful of cameras an itinerant helicopter pilot ambled over and offered Alan an aerial angle. Nice. I think Dugas and someone jumped into the 2 empty seats on the Robinson… no doubt to be sure the weight and balance was in specs.

Thayer BETTER put these pics on the web so we can all see!

By 6pm we were all assembled at 17th Street barbeque joint waiting for an enormous table to be joined for us. And with our extensive yakking we pretty much shut the place down.

With digestion completed by 9am Sunday, the launching for home began. And everyone had a safe return!

I wouldn’t criticize any of our many Q fly-ins but this one had to be one of the very best!