I don't know how I missed it. However, the fact that I wasn't looking might have had something to do with it. It finally dawned on me that there have been more than 100 QBA newsletters published by the QBA. It means that if there are six issues published a year, then the QBA has been around for over, uh-uh, 105/6 is, uh, yea this is our 18th year!

Seventeen plus yeas ago Jim Masal and Robert Herd started things off in 1982 when they published the first QBA newsletter called QUICKTALK out of Lubbock, Texas. The newsletter kept the QUICKTALK name for five years and 30 issues. In 1987, the issues continued to flow, but the newsletter was now called Q-TALK and the issue number started over at One. It's remained that way for 12 years now.

During these 18 years, there have been plenty of builders who have been able to keep the fires burning with a motivation injection every two months. I can certainly say that I have personally gained from all of the years the newsletter has been generated. I started working on a Q-200 kit in 1985 after the previous owner threw in the towel. The newsletter became a major motivational booster that sustained me through 12 years of on and off building. I know there were times when I was ready to throw in the towel myself. However, it was the continued support of this newsletter and especially the help of the other QBA members, that I was able to get my plane completed. Well, not really completed, but I guess they never really are.

Since 1995, I've had the opportunity to try to return the favor. I certainly hope that the continuation of the newsletter will bring more Q's to the airport for first flights. That's my main motivator now. There are still guys out there building that need the continued support of the QBA. As the prices rise on other kits, the Q's value keeps getting more and more obvious. This is generating an influx of new builders. With original builders still plugging away and new guys picking up used kits, we will continue to see first flights.

I have to admit there is one drawback to publishing the newsletter myself. I really miss that adrenaline rush I would get when I would open the mailbox and see the newsletter inside. I would go inside the house and read it from cover to cover. I've heard this same feeling from other builders so I know it's a common feeling.

So why did I miss recognizing that 100th issue? I pulled out the JUL/AUG 1998 issue #70. I saw the editorial titled "OSHKOSH 1998". Now I know why I didn't catch #100. That was my first flight into Oshkosh with my plane. It has taken me awhile to come back down from that special experience. I guess I just landed! 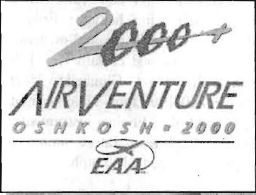 Please check your telephone number on the builder's list that was published in the first issue of the year. There are a lot of blank telephone numbers or wrong numbers. Don't worry; your phone won't ring off the wall. Wouldn't it be nice to know if you had another builder nearby and he could get a hold of you?

I'm afraid it's going to be slim pickins for get-togethers at this years Oshkosh. There will NOT be a banquet or a forum this year. We lost the leadership of Spud Spornitz of the Dragonfly group. Business responsibilities have kept him occupied. We will be on track for next year.

There should still be a couple of back porch meetings at the HOMEBUILDERS HEADQUARTERS located on the flight line. Drop by this building and check their daily schedule for the times.

The date for Ottawa has been changed for 1999. The Ottawa get-together will be held on the Columbus Day weekend, October 8th-10th. That's a Friday through Sunday. The format will remain the same. This place is still your best bet for getting a huge fill of Q planes.

A few months ago I met a new builder named Mike Brown. He had just purchased a Q-2 that was located near me in the Dallas area. Mike had gotten a partial kit that had been in storage a while. It included a nice already finished main wing and LS-1 canard, but not yet mounted. The big problem was that there were no plans around. So Mike asked me whom he could contact about getting a set of plans. Well that brought up the subject of not having a QBA librarian. Mike has volunteered for this job. He has contacted a group of builders via the QBA E-mail list and has come up with a good set of plans that he can make copies from. The plans include both Q-1 and Q-2/Q-200. This will be a break-even effort on Mike's behalf. Mike is willing to provide the legwork, but there will be copy fees and postage. If you feel you are missing any of the plans, you can contact Mike at his E-mail address: This email address is being protected from spambots. You need JavaScript enabled to view it.

You can also contact him through me at the QBA mailing address. If you're looking for any information, you will need to send along a self-addressed stamped envelope.

You can order a PDF or printed copy of Q-talk #75 by using the Q-talk Back Issue Order Page.