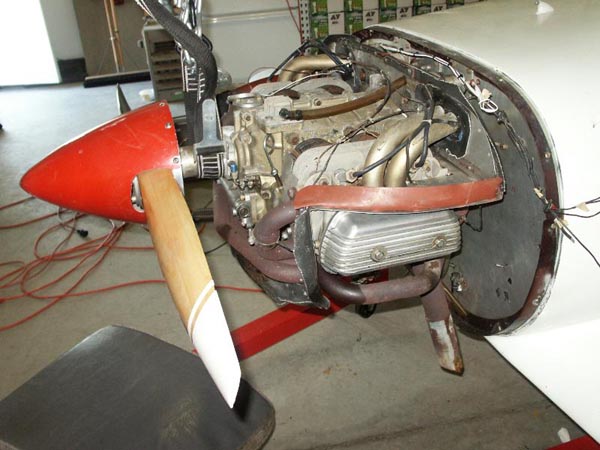 [Editor's Note: Calvin Thorne purchased the Q2 of the late Dr. Steve Kulczycky in June. He had an "engine out" accident on his way home. Matt Sten was asking about the repairability of the wreckage on the Q-list and through him I was able to contact Calvin. As a little background into the accident I am reprinting a portion of Matt's e-mail to me to give you some indication of the terrain in which Calvin was forced to make an emergency landing. The following article should be food for thought. NOTE: If this doesn't make you go check your throttle and mixture cables, I don't know what will.]

In a nutshell, it appears that there was a previous repair to the mixture control cable that broke during flight. In the absence of any secondary mechanism/spring to ensure the mixture went to the full rich position in the event of cable failure, the mixture control went to full lean. Of course, this then cut the engine and prevented a re-light.

The reports indicate that the plane was landed on the Trans-Canada Highway near Field, B.C. For those unfamiliar with the geography, note that this is not "near a field in British Columbia." In that neck of the woods there isn't much to be found in the way of fields. Lots of tall bumpy rocks... and very few fields. Probably one of those ironic Canadian town names. Also, the highway there is not as straight as it looks on Google Maps.

Folks,
A very exciting time regarding the Quickie! I flew this aircraft and two others out in Abbotsford for a week and got very comfortable with flying and taxiing it. I was trained by two extremely nice fellows in Abbotsford in both of their planes and in the one I bought. These guys were of great assistance in getting checked out in the Quickie. One of the fellows aircraft had dual controls and that gave me excellent training experience. 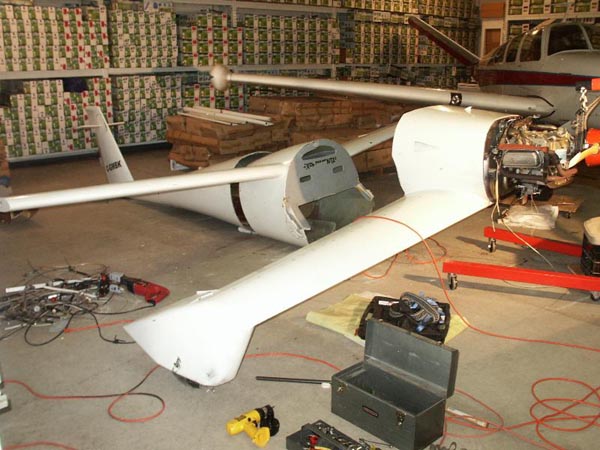 I am a Commercial licensed pilot with around 1300 hours time with extensive time in twins and in tail draggers. Below is a copy of the details of the airplane transit from Abbotsford to Calgary Springbank and a couple of photos of the separated mixture cable.

I am fine and back to normal again but lost my pilots license due to medical precautions for a year. I had four days in hospital and then needed about seven more days of rest at home following the June 10, 2011accident. I had a concussion and minor cracked skull and had lost consciousness a few times during rescue. I am feeling 100% and making regular visits to the airport once again. 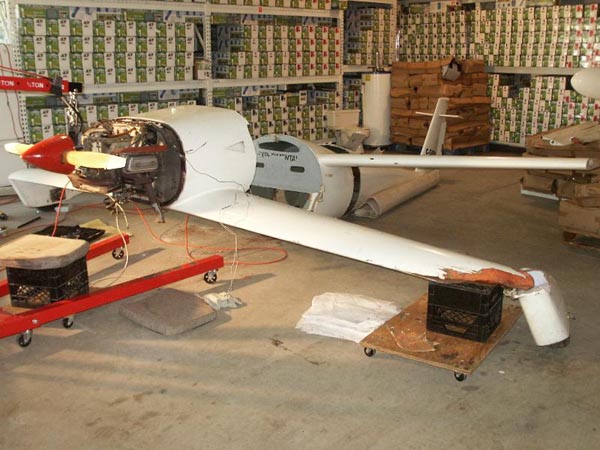 I was at 7500 feet eastbound following the VFR route over the Trans Canada highway when the engine stopped, I had about 8 or 9 gallons of fuel remaining. I tried 4 restarts with different settings on the mixture and throttle without any success, the engine would not even fire. I then decided to do three mayday calls on 126.7 and then prepare for landing as best I could.

There were only 6 autos and a semi going in the same direction as me and so I decided I could land in front of the first car. My left wheel caught the left edge of the pavement and it veered me off into the left ditch where I hit bushes with the left wheel and then sheared it off after hitting a 3 inch pole with a sign on it. The tail spring broke on landing and that may also have been a cause for the veer to the left off the highway. EMS/Firefighters cut the plane in half, aft of the instrument panel to get me out without bending me. 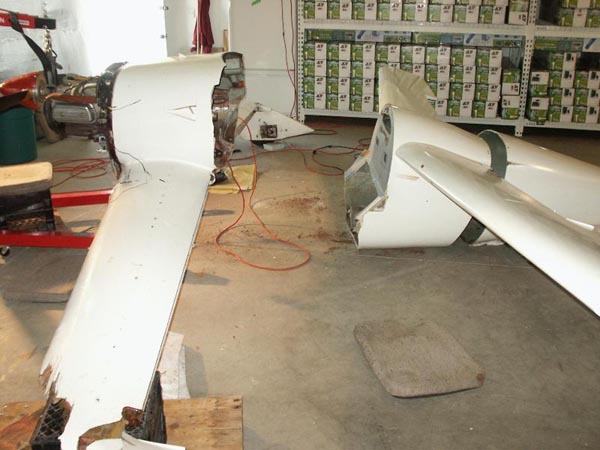 I am disappointed I bought Quickie 2 C-GMBK and that I had the unfortunate circumstance to have to do an emergency landing on the Trans Canada highway just west of Field BC. It is all the more a sore point that I did not have any hull insurance on the plane. Oh well!

We removed the engine cowlings and then removed the fuel lines checking for any blockage. None were found and the fuel line and fuel filter from the header tank were free flowing. We began the inspection of the engine and immediately found that the Mixture cable was separated about six inches from the carburetor forward of the firewall. 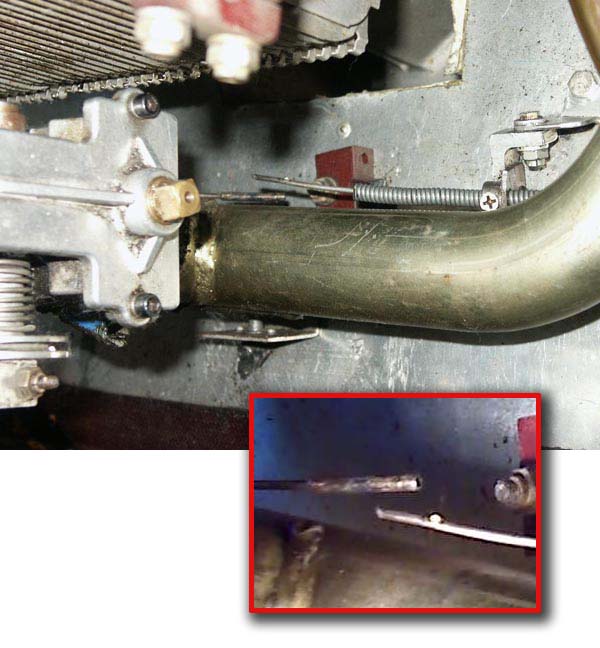 The AME explained that the mixture cable steel center wire had been spliced together with a silver soldered sleeve about eight inches from the carburetor. As a result the cable just pulled out of the sleeve on one side, of the sleeve. The AME explained that this is a no-no and should never have been done as it is a potential point of failure on a critical connection.

The airframe is severely damaged but repairable and in the following condition. Tail cone aft of the main wing is intact with the tail spring broken, joining tabs broken and cables to tail wheel cut. Main wing is in very good shape except the left aileron needs rebuilding. Firewall forward is intact, the engine cowlings are fine and the propeller was sideways and so no damage to the engine. Somehow the T-tail and the propeller sustained damage during the recovery and storage. The T-tail needs repair and the propeller needing replacement. I think this may have been from some winching/lifting. 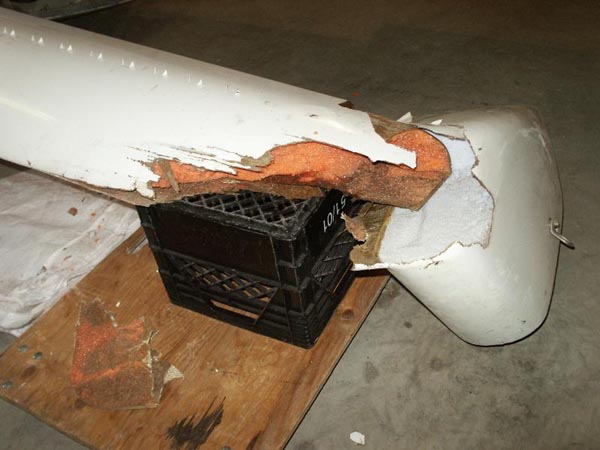 The section where you sit between the two wings is another story. They cut the plane in two to get me out of it. The plane was cut at a point just aft of the instrument panel from the canopy stringers downward . It now needs a new 3 foot section installed in the area where you sit, a new main fuel tank/seat built, new panel and a new canopy and frame built. The right canard and elevator are in good condition, minor surface damage to be repaired. The left elevator needs to be rebuilt as well as the left aileron.

Aft of the canard in the fuselage area has the following damage. Seats both severely damaged, main fuel tank destroyed, header tank cracked open. Canard left wheel torn off and a bit of damage to the tip of the canard spar (left tip). The left wheel assembly and fairing is intact, but detached from the canard. I have stripped the aircraft of all accessory items, panel instruments and interior control tubing so that rebuilding and repair can be started one day.

I have 14 years experience building in sandwich skin construction and believe I can get it back together one day.