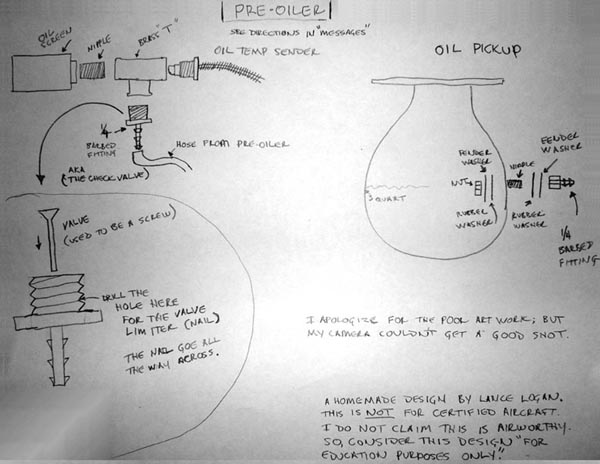 This pre-oiler will pump the system to 20 pounds before I touch the prop. I leave it running until the engine starts then turn it off. This solve two problems. Dry starts, and lost oil pump prime. I run this pump with a cordless drill battery (also used for my intercom). I posted a drawing to clarify the details.

For the pickup side get a 1/4 barbed fitting with a female opposite end, a short nipple that will thread into it, and a nut for the inside of the tank. You'll also need a couple of fender washers and rubber washers to go on either side of the hole. The washers should just fit over the nipple. First I filled the oil tank with 3 quarts. It doesn't matter what you use, you'll be cleaning it after you drill the hole.

I decided on three quarts for two reasons. I didn't want to pre-oil the engine with oil from the bottom of the sump since that's where any junk will accumulate, and if the fitting failed for any reason I didn't want ALL the oil to drain out.

OK, on the back of the tank drill a pilot hole at the 3 qt mark. This will be the oil pickup for the pre-oiler. You'll enlarge it later when you have all the parts ready to go. Once you have the parts in front of you it's easy to see what you need to do.

For the injection side you need to find a female tee that has the same thread as the oil temp sender hole (on the long axis). Get a nipple to join it to the oil screen assembly. The last thing you need is a 1/4 male thread barbed fitting to attach to the side port on the Tee that you've added. Now, the pump I usedis geared and will hold pressure, but I didn't want to fly around with a foot of hose pressurized. Once the engine's running the oil pump would keep the hose from the pre-oiler to the engine pressurized with hot oil. So I made a check
valve.

The only thing added to the list of parts is a screw and finish nail, hi-tech right? I bought a long countersunk stainless steel screw with the top couple of inches unthreaded and cut off the threaded part. I slipped the now shortened screw into the barbed fitting that the pressure line from the pre-oiler feeds. Then I measured the depth of the screw when seated. I subtracted a 1/4 inch from that and drilled a small hole through the threaded part of the fitting (both sides). I slid the nail through and checked to make sure the "valve" would open and close without binding. Then I trimmed the nail until it did not interfere with the threads. I screwed it into the Tee and now the valve travel limiter (nail) is trapped by the outside threads.

The rest of the project is obvious, mount the pump to the firewall, hook up some hoses, and do a little wiring. 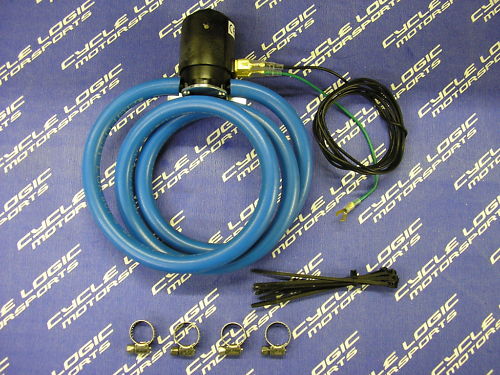 I bought the pump and hose kit on EBAY. Turbo Electric Oil Evac Pumps on eBay