I guess that’s the short version of my experience at the 2010 Livermore Fly-in. Not only did I get to see my first Q flight when Bruce Crain did a low pass over the field Friday evening, I got my first and second flights in Q’s on Saturday! The experience was awesome!

I flew in commercially from Pennsylvania, and after picking up the rental car, I headed straight for LVK. Now, since most of the pilots arriving there were flying there in machines that they had actually constructed with their bare hands, the bar was set fairly high for the editor to arrive in something more manly. I’m pretty secure in my manhood, so this is what I showed up in . . . 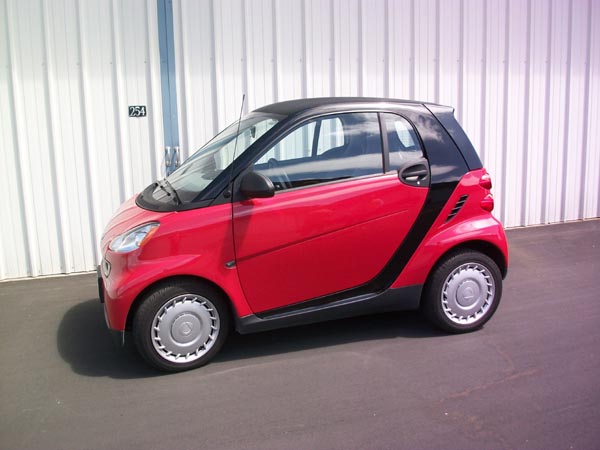 . . .Bruce Crain later remarked, “Well, you’ll never get anyone pregnant in the back of this car.” To which I replied, “You’d never get a chance to try because of this car!” From then on, the car was known as the BCC (Birth Control Car). 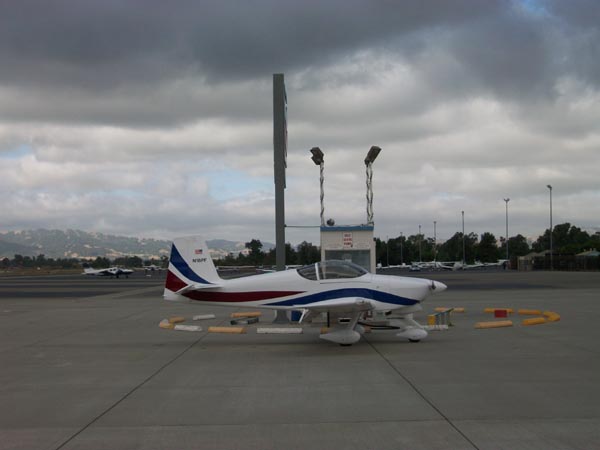 At any rate, after I checked in at the great hotel that our hosts arranged for us, I gave Alan Thayer a call and headed over to help move tables. From there we went over to watch the arrival of Paul Fisher, Kevin Boddicker, and Bruce Crain. Kevin was riding shotgun in Paul’s beautiful RV7A, and Bruce was following Paul in his Tri-Q. We were able to track their progress towards the airport since Paul was transmitting his location and flight data with a Micro-Trak 8000 FA. 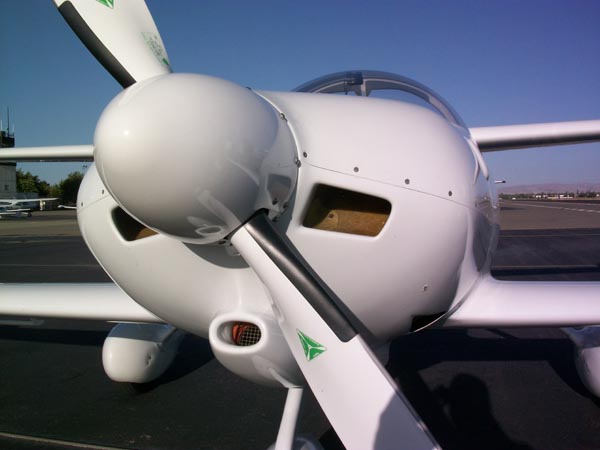 Bruce arrived shortly after Paul and Kevin, and once we got everyone tied down and secured we headed over to Bebe’s restaurant. At the restaurant I met many more members of QBA and several other friendly faces including Tim Iverson who flew in his Dragonfly, Chuck and Bob Johnson who are completing a Corvair powered Dragonfly, Brad Olson the current owner of Tom Moore’s Q-200, Bob Farnum, Mike Evans, Mike Perry, and last but definitely not least Jim Masal. 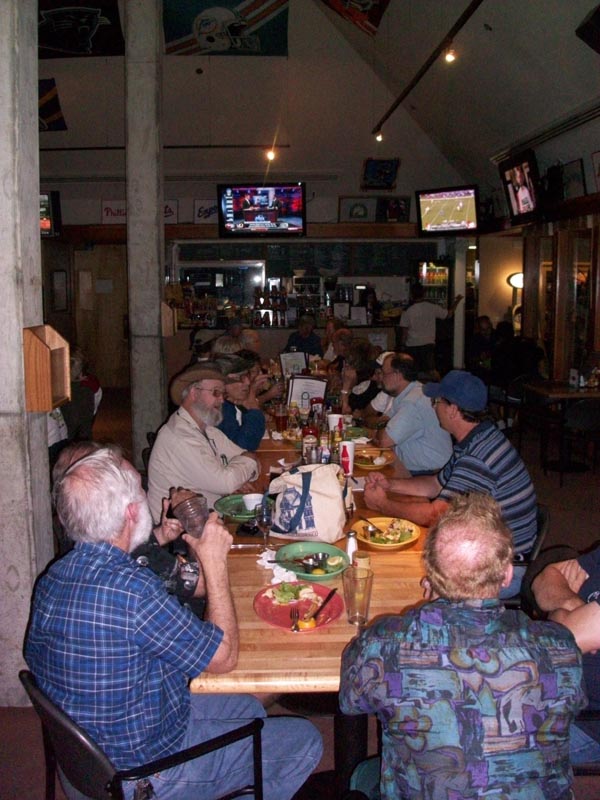 We all had a great time, with great food and even better hanger flying. The night at Bebe’s gave us all an opportunity to get to know one another before the day’s events on Saturday, and most of us were there until nearly 10:00 p.m. Friday night. 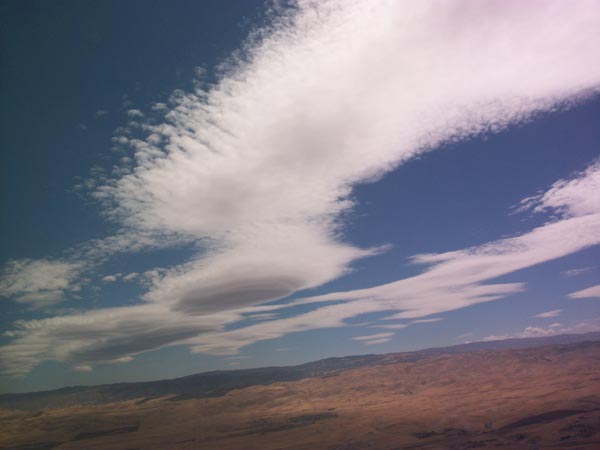 On Saturday, we continued the hanger flying at breakfast, and turnout was so good we nearly cleared one side of the restaurant when we got all of the tables put together. I was simply amazed at the wealth of information shared at events like these. In the photo below, Paul Lipps is describing to Mike Perry his ideas for an improved air intake. (Complete with napkin drawing.) 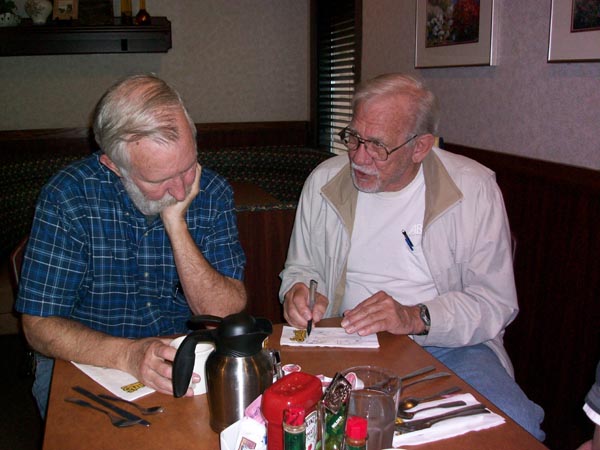 After breakfast, I gave Bruce Crain a ride back to the airport (despite his disparaging remarks about my car) and we drove straight to his plane. Bruce was supposed to taxi over to the other side of the airport where all of the “fly-in planes” were located, but instead he offered me a ride. He didn’t need to ask twice. 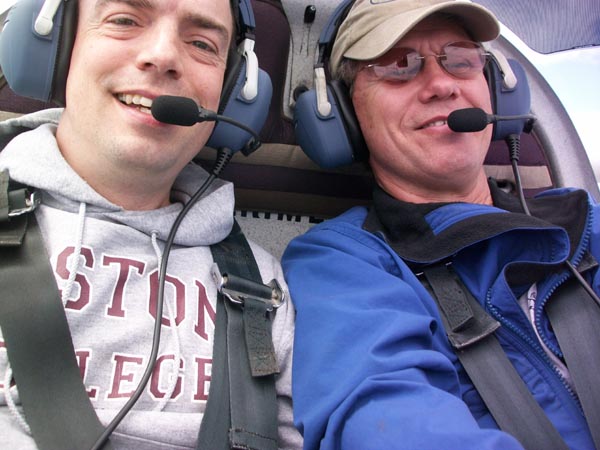 The grin shown above remains on my face, even as I’m writing this. Nothing can compare to your first flight in a Q, and somehow the rented Cessna that I usually fly lost a bit of its luster! The air was extremely bumpy near the airport with nearly 20 knot winds most of the day, but compared to the SPAM can I normally fly, Bruce’s Tri-Q seemed silky smooth. Bruce’s plane will now forever be implanted in my memory. Not only is it the first Q I saw fly on that low pass on Friday, it is the first Q I got to fly in. Awesome! 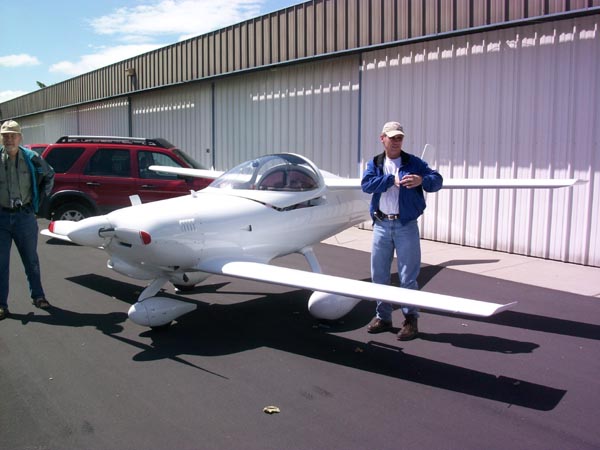 When I got back from our flight I had a few moments to snap some more pictures during the “Cowls off” session. As you can see in the picture gallery though, not many owners actually took their cowls off. One exception was Bruce Crane who was sporting his O-200 with constant speed prop. 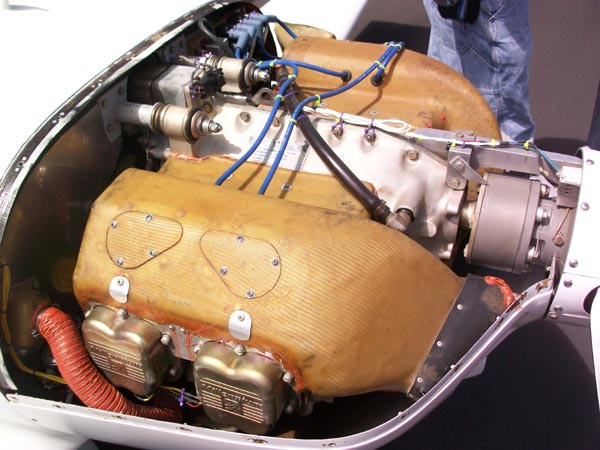 Tim Iverson also took the cowling off his Dragonfly to show his HAPI installation. 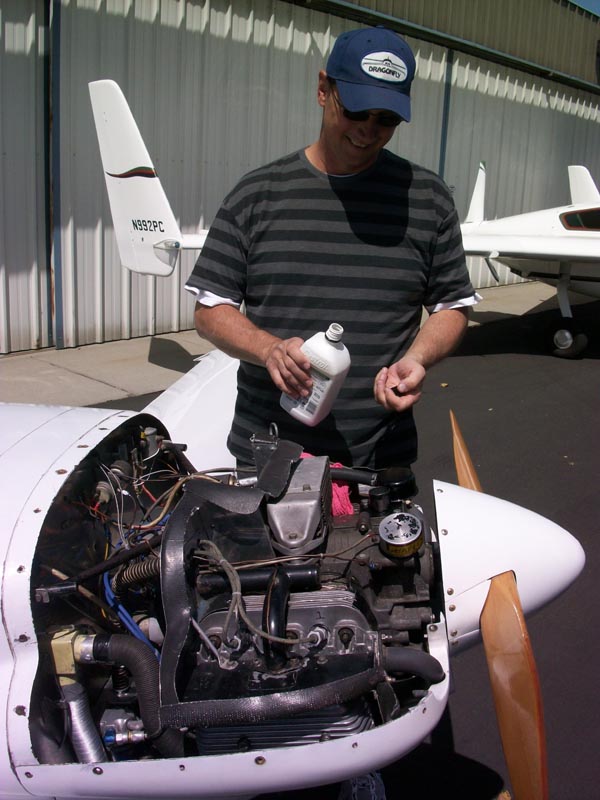 Alan Thayer didn’t remove his cowling, but when he turned his back someone tried to sell his Q-200! 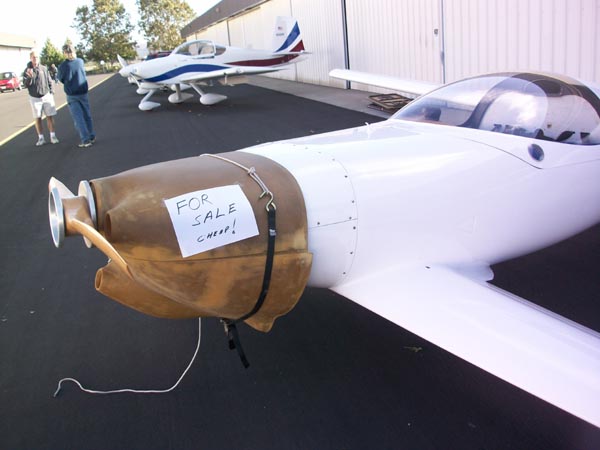 A complete list of the airplanes that made it to the fly-in appear below:

Next, it was time for lunch, and Jim Masal was the next victim brave enough to ride in the BCC. 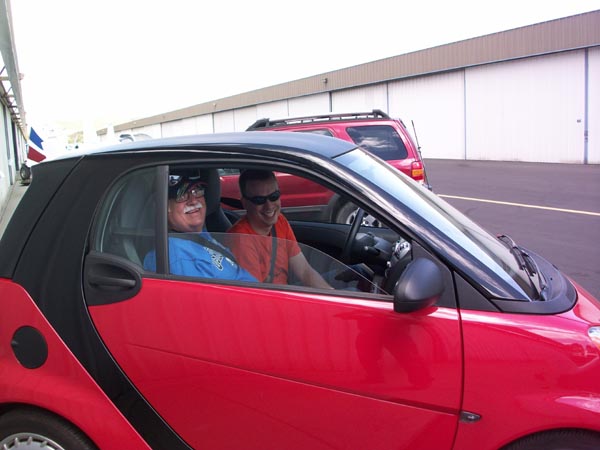 It was great to have an opportunity to talk with Jim and share ideas for the Quickie Builders Association going forward. We face some challenges trying to keep the group together, but I am still expecting great things for us going forward as the next generation becomes involved with these planes. 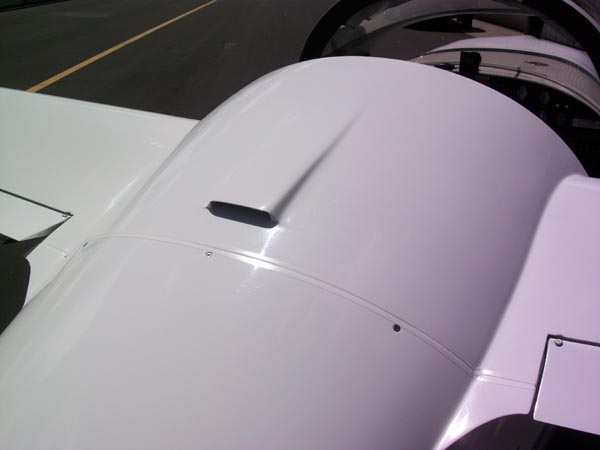 When we returned from lunch, Jim Patillo approached me and asked if I’d like to take a ride in his Q-200 taildragger. Again, he didn’t need to ask me twice. My inclination was to say that I was most interested in Jim’s taildragger since that’s what I’m building in my garage. However, after one look at Jim’s plane it became clear that this was definitely NOT what I was building in my garage. Jim Patillo’s plane is a work of art, what I have in my garage relatively speaking is a work of farce! LOL! 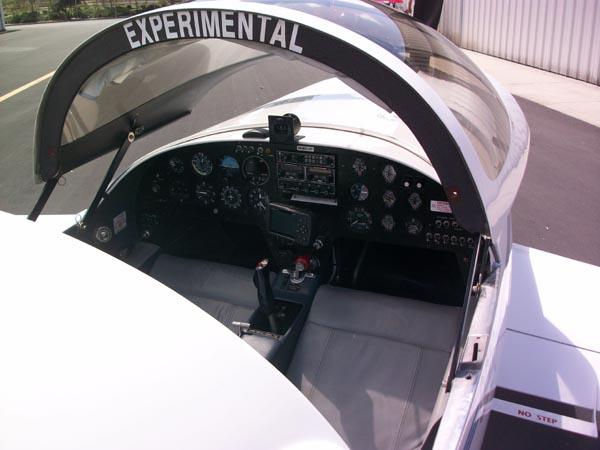 Seeing the extreme attention to detail and craftsmanship that went onto Jim’s plane was simply astounding. Yet, seeing the performance of Jim’s plane was even more impressive. Just watch this quick video I captured during our flight:

I felt like a kid in a candy store. Alan Thayer asked Jim if he was having trouble on that flight since it looked like the smile on my face was taking up the whole cockpit! That wasn’t much of an exaggeration! 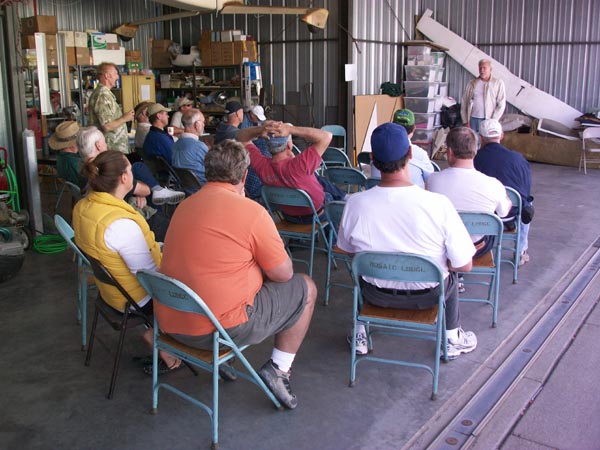 When we got back to the hangers it was time for Paul Lipp’s forum on “Air.” Paul is a rocket scientist (literally) so even though some of the things he said raised some eyebrows, and defied conventional teachings regarding lift and drag, the discussion was engaging and definitely food for thought. I made sure that I grabbed a card from him before I left. I’m hoping that he can write an article for us based on his talk at Livermore. I would especially like to hear more about his ideas for improving propeller and wing efficiency, reducing drag with OUTPUT plenums, and gathering test data and correcting static pressure error using a 2-way GPS pattern. 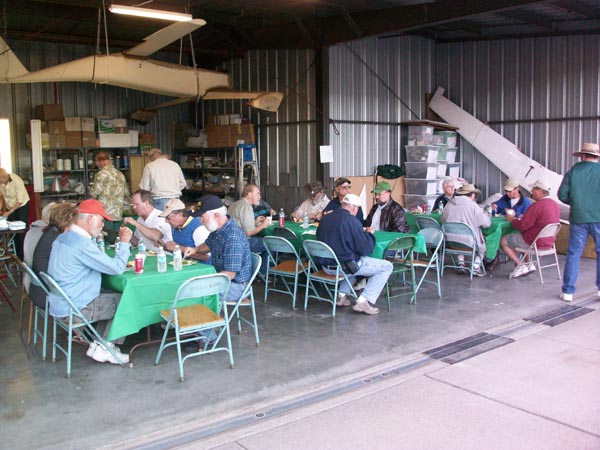 After the forum, it was time to start cooking Sam’s famous barbequed chicken. I had heard rumors that it was “not to be missed,” but the rumors totally undersold it! All of the food, especially the chicken was delicious. However, the part I enjoyed most was eating and talking with people who “get me” and understand my passion for these experimental birds we call Quickies! 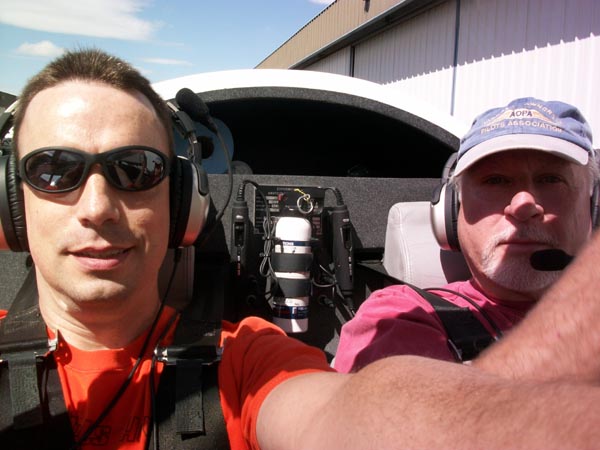 I had such a great time all weekend, and I would personally like to thank our hosts Alan Thayer and Sam Kittle for putting together such a great gathering. Your effort and planning were very visible and much appreciated. I also wanted to thank Bruce Crain and Jim Patillo, not just for giving me rides, but for being such great ambassadors for the design. Also, thanks to Bob Farnum, Mike Evans, Brad Olson, Mike Perry, Kevin Boddicker, and Paul Fisher for giving me an ear to chew on. It was great to finally meet you all and share some good laughs. I also wanted to thank our newest QBA members, the Johnson brothers, and Tim Iverson. I appreciate your support. And finally, I’d like to thank Jim Masal for giving me some great ideas about keeping QBA together. 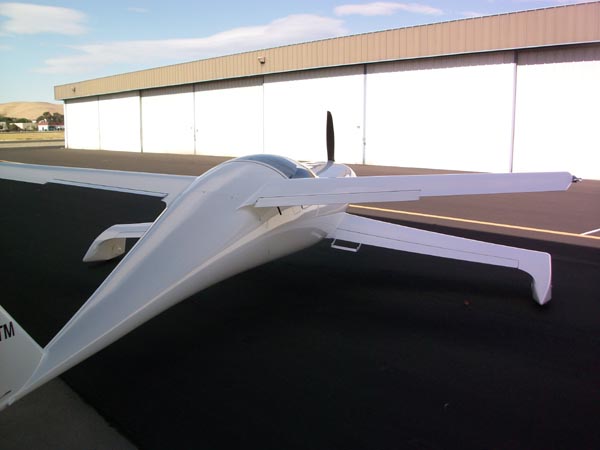 It’s obvious to me now that the world is a much better and safer place when we all get together to exchange ideas. I will definitely be attending more of these gatherings and I hope you will too! 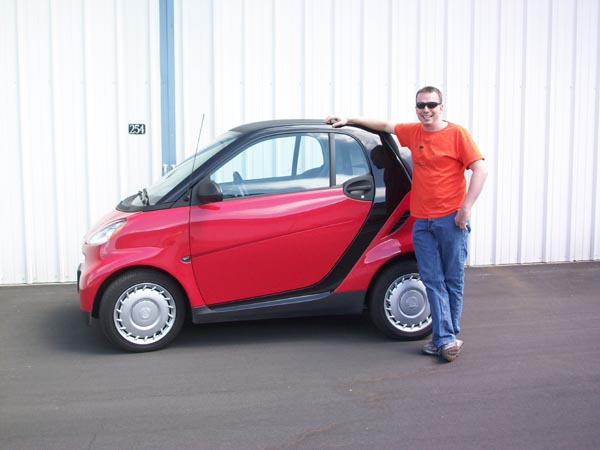 By the way. . . laugh all you want. After all that driving this weekend, I had to fill up the tank again before returning the car. . . it cost me a whopping $10! 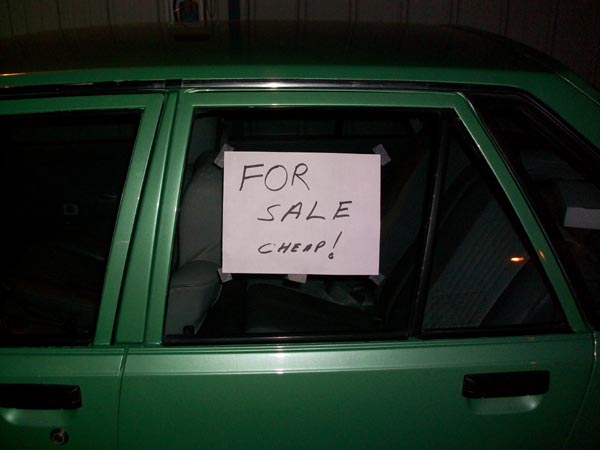