A report from the Livermore Fly-in Submitted by Jim Masal

How they managed it I don't know, but the Livermore boys got speed guru Gary Hertzler to motor on up to LVK as a sort >of "keynote speaker." Many of you know that Gary has been flying his VariEZ for many years. For a long time it was powered by an A-80 and he used to beat the pants off of many higher powered birds in the CAFE 40o races of long ago. He did it by being consistently greedy for every half knot of speed he could squeeze out of his airframe. It was meticulous work. He came to Northern Caleeeeeeefornia to share some of his experience with us, not only by slide presentation but by individually critiquing nearly every plane at our site.

Pity poor Thayer whose Q2 wheelpants were closest to the door and got particularly hammered by Gary first. I shudder to think Thayer might get motivated to improve his aerodynamics with MORE work, as his Q has been "close" to flying for too many years. (All I gotta do is....). But, nobody's pants passed muster anyway. Gary believes we could gain 5 kts or more with an improved aerodynamic pant.

Improvements? He suggests the pant leading edge should be rounded like a bullet nose, not flat (as many are) or pointed or even raked back as on a Q-1. All joined surfaces should be generously rounded such as where the sides meet at the front and along the joint with the canard. The sides of our pants have a pronounced flatness and maybe as little as a half inch of foam tapered back from the point of max thickness into a teardrop in plan view would be better and not affect the axle hole. (See drawing on next page.) From a side view, the curve of the pant tapers to the aft end; the taper (slope) should be the same on both top and up from the bottom and would end in about a 4 inch tall "blade" shape, thus eliminating an ankle gouging bloody point. 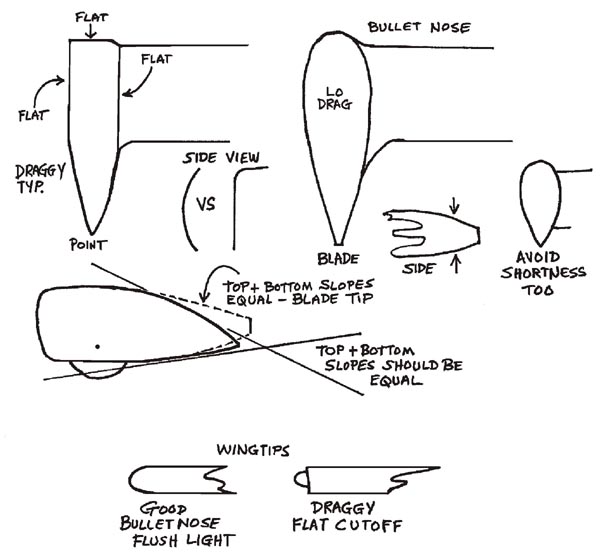 The aim is to make the air pressures around the pant equal at all points.

About wing tips, bullet nosed rounded ones would be best, flat cutoff ones poor and Hoerners good. Maybe you guys who want sex appeal will just have to give up some speed here! Each tip strobe on a cutoff tip takes 0.8 hp to drive it around at 150 kts. The vortex tends to curl over the upper tip and reduces effective span.

Think about your exhaust pipes: a 1 inch diameter pipe by 1 ft. takes 2.8 hp. to drive it around! End them inside or backward pointing (where you will still get some plume drag).

Fuse joint at aft canard is a big drag. An air tuft video of Jon Finley's plane visualized that for us. The best joint angle is 90 degrees. Failing that, avoid acute angles. We have a rounded fuselage and the tufts are pretty smooth until the elevator joint area. Some attention to filleting a 90 degree in the elevator joint area would be more speedy. Finley's tufted main wing joint looks pretty clean. Engine cooling drag. Engine inlets should be nicely curved and all edges and turns of inside ducting should be also. Gary had quite a bit more to say about this but you had to be there for the slides. But this interested me: our firewalls come straight down to the bottom of the fuse. Gary depicted one which had a generous radius near the bottom... maybe the radius of a CD disc. You want to slow cooling air down on entry via expanding ducts then speed it up to free stream velocity as it exits by gently narrowing its path. 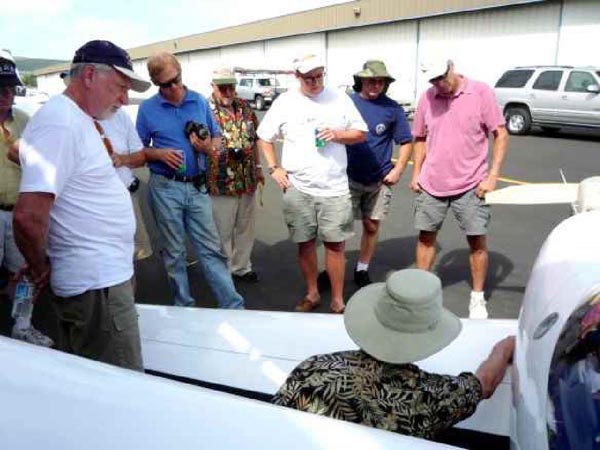 Exit cockpit cooling. Most experimentals have enough canopy leaks to suffice. NACA inlets are effective but outlets should have parallel walls and should be submerged to speed up air to free stream velocity. Patillo has a nice outlet behind the top of his main wing and Gary suggested it would be less draggy if it were flush. He thought an air exit on the bottom fuselage near the tailwheel would be quite good. The tailwheel is making an air ruckus back there anyway.

Hertzler talked props. He has a growing side business making wood props for the EZ pushers and a couple of tractors. but not ours, so don't get your checkbooks out! He admits he was glad to come to our fete because he doesn't know much about the performance of our ships and wanted to educate hisself.

Gary uses clear maple blanks to make props which are covered with a ply of carbon (stiff, to take loads) and a top ply of bid oriented at 45 degrees. Plies don't wrap. Erosion protection is provided by a rubberized material forming the leading edge. His props are straight at the trailing edge with a scimitar leading edge to provide some of the advantages of a swept wing. He believes that for our range of power and speed a 3 blade prop is no advantage (but ref. to sexiness mentioned earlier). Gary believes to avoid prop vibration it must be balanced by weight such that it will stay still in all clock positions and that each prop blade should be accurately contoured to give the same lift blade to blade at each station. And. each blade should track accurately. He once found a prop that had a flex node a few inches from the tip on one blade but not on the other.

Hertzler is all about flying efficiently. His aerodynamic clean up is not so much to fly like a bat-outta-hell as it is to drop his fuel consumption. He offered some good tips about that and one of many was that he flies his climb (after it's established), cruise and descent LOP. He'll run 65% in climb, 40% cruise and comes down properly leaned on descent.

It was a special treat to have this knowledgeable wizard with us in a more personal venue. 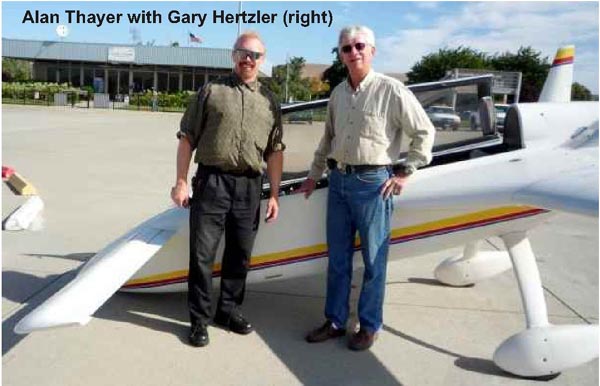 You can order a printed copy of Q-talk #137 by using the Q-talk Back Issue Order Page.