It is always a treat to get letters from the group and this year is no exception.

I wanted to thank you for the newsletter. I think you are doing a fine job.

I haven't been flying for about a year now and I have missed two Sullivan fly-ins. That really hurts. I am having trouble with my flight medical; not because I haven't been able to pass it, but because of my flight surgeon's inept secretary. She didn't send in all the documents necessary with the request for the medical. I had angioplasty several years ago, so now I have to pass a stress test every time before they will issue me a new medical. From the time they send all the info to Oklahoma City and the time it takes the FAA to approve it, two or three months have gone by. When the doctors office got the notice from the FAA that they were missing some documents, it took another couple of months to straighten that out. By the time I did get my flight medical, it was about to expire!

Then it was my heart doctor's turn to screw things up. The FAA has a list of things that the doctor has to follow. He has always done things correct in the past, but last year he messed up by not having me work my heart rate up to a certain percent of capacity and the FAA would not accept the results!

He tried to intercede with the FAA, but it took a considerable amount of time for the doctor to even talk to someone at the FAA. The FAA's response was that their procedures were to be followed to the tee.

Well, I would have had to pay for another stress test even though the doctor screwed up. The cost of a second stress test was more than I want to pay and the time involved was just not making it worth it. So, I have to wait until enough time has passed to allow my health insurance to cover the cost.

Kevin Boddicker was in town for work recently and we had supper together. We ended up at my place watching some old videos I had taken in the late 1980's. They were mostly take off's and landings, and flying around south Texas. It really pumped me up! I'm determined to get my medical mess straightened out. If I can't, I would have to sell my Quickie, but I don't want to do that as I love to fly it!

I saw on the Q-list recently that someone would be celebrating their 15th year of flight at Oshkosh this coming year. My first flight was in April of 1985. Almost 21 years ago!

Your absence at the fly-ins did not go unnoticed Jerry. We missed you and hope you get things worked out so we can see you again at this year's fly-in!

Thanks for the issues Doug! It is always great to pull one out of the letter box.

My Q2 has been getting built for about 22 years. Now I'm doing some fast taxiing with it. I'm learning to anticipate how much foot pressure to apply to keep her going straight! However, and whatever, there will always be something to do on it. Empty weight is 644 lbs.

I wanted an airplane that I could fly short cross country, about 600 SM and cruise above 140 MPH. The Tri-Q200 seem to fit the bill. But safety is always on my mind, so I called a few people on the QBA website. They all stated that the Tri-Q's were safer for low time pilots, they were cost effective to operate, and fun to fly. I have a formula that I always lived by when flying; Safety(risk) X Speed X Cost. Simply put, its how fast I can go safely and at what cost. I have 350 total hours, but haven't flown in 6 years. So, after weighing all my safety/speed/cost options, I was off looking for a Q.

I purchased a Tri-Q last year. The ad stated "all you need is a canopy and you're ready to fly". A sucker is born every minute I always say! Too bad I'm the sucker. The Tri-Q2 had an A-65 Continental engine, and I wanted a 0-200. I traded the A-65 for an 0-200 sight unseen (A sucker again). The lessons I learned; don't trade anything until you have the parts in hand.

I traveled about 800 miles one way to pick up this beautifully pictured Tri-Q2. The airframe is in great shape and if I was a betting man, I would say the airframe has been flown before but I purchased the aircraft without being licensed or registered. The wiring in the aircraft was perfect for starting a fire. Someone had taken 14 gage wiring and had peel spliced 20 and 22 gage wiring to it! I guess some of the wiring was left bare in case a guy wanted to add connections.

The throttle, carb heat and power cables were all strategically routed behind the rudder pedals so you could step on them while flying or landing! So, the aircraft sat for 6 months while I reflected on the stupidity of me buying an accident waiting to happen.

I have ripped all the stupid crap out and have started the refurbishing process. I have two canopies from Todd's Canopies just in case I screw one up. I rebuilt my O-200 engine to zero time. I have an Ed Sterba 60x70 prop, an A200 radio and a handheld GPS. I'm on a steady path to recovery. I guess I shouldn't be too upset at the project as I only have $11K into it at this point. I hope to have a safe, reliable aircraft when I'm done.

Thanks for letting me vent!

Many of us have been there & done that Mark! 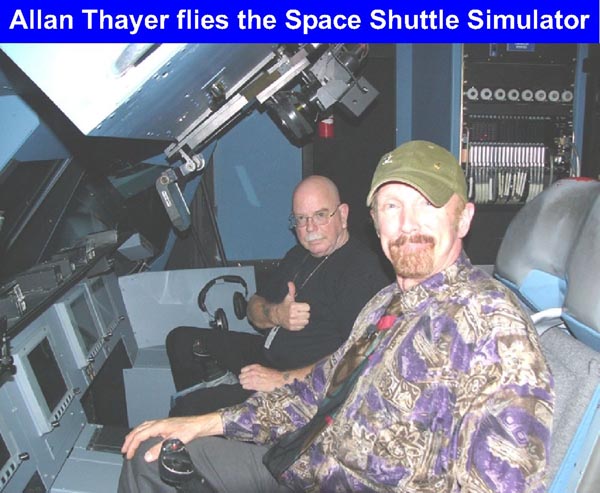 What a remarkable year 2005 was, with a number of exciting and new open doors to walk through! The year marked our country's return to flight, after a long and painful pause in our space program, and in March, I was privileged to be part of the creation of a documentary produced by friends at a local television station. The documentary covered the role that the NASA Ames research center in Mountain View, Calif. was playing in that huge step forward. I became acquainted with the media relations people at AMES, and I was invited to attend a press conference with Eileen Collins, commander of STS mission 114, and pilot Jim Kelly. I was able to ask both of them several questions during the press conference, and got autographs from both of them, as well as from other astronauts.

As part of our coverage, I was able to fly the shuttle simulator at AMES; the very simulator that Collins and Kelly trained in two weeks prior. The technical team let me fly the simulator, which is in every way identical to the space shuttle orbiter, in two different modes: visual only, and visual plus motion. On the last run, (out of 8 descent and landing modes) I flew the shuttle in from fifteen thousand feet, going through the atmosphere at 307 mph., to touchdown at the Cape. They threw in moderate turbulence and cross-wind and I can proudly say that I totally stuck the landing. I deployed the chute and proceeded with the roll-out. All simulated of course, but as real as it gets, and brought the thing to a full stop right on the centerline of the runway! After the last run, I was drenched! A thrill I will NEVER forget!

2005 was not only NASA's return to flight, but it also marked my OWN return to flight! After working on my plane all these years, and not having flown for a very long time (especially since my illness), I went in for my fAa medical. After passing it, I went all out to get my certificate re-activated. After a thorough review of the air regulations and some good re-familiarization rides with the instructor, I passed my flight review.... whew! That was a dream come true! I even got my tail-dragger endorsement - a huge deal, as I look forward this year to test-flying my own plane. Finally tail-dragger certified, I was able to act as pilot in command for my good friend as we took his plane to Laughlin, Nevada for our association's annual gathering of similar type planes in April. I've been able to be his P.I.C. on various other occasions as well, which looks awfully good in my log book!

My Q-200 is coming along and I know you are wondering if it will ever fly. I see no reason why this year will not be the year for it to take to the skies. I plan to start the engine for the first time early this year. Then finish the cowling, refit the canopy struts and hinges, then go fly!

QBA on the grow! - by Doug Humble
Tri-Q Wheel Lift - by Lynn French
Q2 Header Tank Repair - by Jon Finley
Blog, Blog, Blog! - by Dan Yager
Now for some motivation - by Earnest Martin
From Up North, Eh - by Reg Clarke
Speaking of the QBA Web site... - by Doug Humble
Where was Sam hiding? - by Doug Humble

Contact Jon Finley at 952-423-6391 or This email address is being protected from spambots. You need JavaScript enabled to view it. www.finleyweb.net/balance

Wanted: Goodyear tires for a Q1 or other manf. tires' that are the same diameter as the Goodyear tires. JP Stroud 321-757-3553 or This email address is being protected from spambots. You need JavaScript enabled to view it.

Wanted: Searching for the Q1 that sold on eBay one year ago for $1800. Need 3-6 Oklahoma City metro persons to complete my 50% complete Q1 in exchange for limited flying privileges; or A&P pilot with foam & fiberglass experience. John Cowan 405-447-5551

For Sale: Q-200 project. Major components complete. Subaru EA81 engine available. Some instruments. All plans and most old newsletters. Eric Beeson 720-201-7992 Longmont, CO or This email address is being protected from spambots. You need JavaScript enabled to view it.

You can order a printed copy of Q-talk #115 by using the Q-talk Back Issue Order Page.