As long as I have owned my Q2 (since 1997), the smell of fuel has existed in the cockpit (with 100LL). I started using automotive fuel in mid-1999 and the smell continued. I first noticed a mushy feeling in the fuselage sides around the header tank a year or two later. Having been thru the mushy fuselage syndrome with my Q1, I knew what this was about. The mushy feeling is hard to describe, it's just kind of a mushy feeling when pressing with your thumb or finger as compared to the typical feel. I watched this "mushiness" for several years. Finally, early in 2005, I found fuel weeping from the header tank inside the cockpit. It was time to repair the problem.

I am aware of problems that others have had with fuel leaking into the canard and/or fuselage sides and eating the foam. I watched closely for this and am comfortable that no harm was done. Additionally; the mushy fuselage, smell of fuel, and/or presence of fuel was limited to only the area around the header tank.

I elected to cut out the portion of the fuselage that forms the top of the header tank. This provided excellent access to the inside of the header tank with minimal work. Working with a finished & flying aircraft, I felt that cutting the tank out from inside the fuselage and then glassing it (or a new one) back into place would be nearly impossible. The initial cut was made approximately two inches inside the walls of the header tank. A second "step cut" was made later that removed another inch or two of just the exterior skin. This provided access to the tank inner skin allowing a good glass-to-glass bond for the new top inner skin. 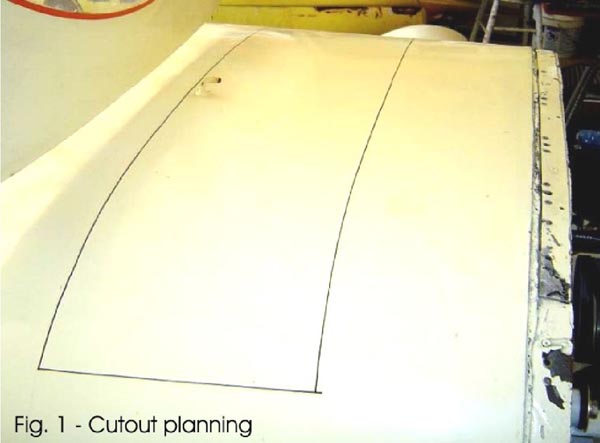 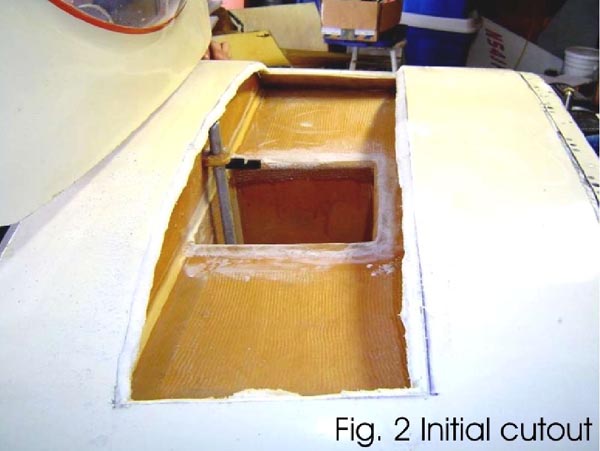 After opening the tank I found several significant problems: The inside skin of the fuselage had not been properly prepared when the aircraft was constructed. There had not been any additional glass applied, nor any attempt at filling the pinholes in the inner fuselage skin. The flox joints were quite poor and, in many places, there was inadequate flox leaving large gaps exposing the inner foam of the tank walls. The front and bottom walls of the tank had delaminated and were fuel soaked.

A friend loaned me a neat tool to cut open the tank. It is a called a MultiMaster and is made by Fein (http://www.feinus.com). The tool oscillates and has a neat little cutting head. It slices thru fiberglass like a hot knife thru butter, does not cause delaminations, and is zero work. Very neat little item.

I talked with Gary Hunter (former Pushy Galore crew chief, current Flying Tiger crew chief, and composite guru for the EZ boys) about the proper way to repair the tank. Gary pointed out the importance of properly drying ALL the fuel out of the structure before attempting repair. Then apply one ply of lightweight glass and EZ-Poxy. The lightweight glass provides thickness control and makes sure the resin covers all areas and does not crawl away. Additionally he suggested: "Once that is completed, I would seriously consider lining the tank with the same system they use for the Lancair kit builds. It is a rather thick gray colored epoxy coating that provides that extra layer of protection. The company that makes it is called JEFFCO. Jeffco Products. 5252 Kearny Villa Way San Diego, CA 92123 Phone: (858) 576-9900 (800) JP-EPOXY Fax: (858) 576-7093." 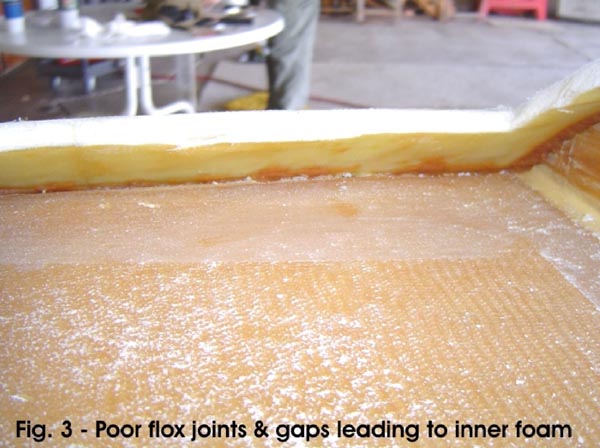 To allow the inner foam of the tank walls to dry, I decided to drill a large number of 3/8" holes all around the inside skin of the tank and setup a fan blowing air on/around the tank. I left this fan running for about a week. In all, the inside of tank was exposed for about six weeks. This seemed to completely dry the tank and I could find no remaining fuel.

While the tank was open I installed threaded aluminum inserts for the fuel strainer and input/output ports. I feel that the per-plans approach of floxing an aluminum tube thru the wall is a very weak and leak prone solution. I much prefer a threaded fitting that is strong and allows proper maintenance to be performed.

I installed proper flox corners throughout the tank, repaired all delaminations, and thoroughly sanded and prepped the tank. One ply of 9oz BID and one ply 1.5oz BID was used to line the inside of the tank and a HEAVY coating of epoxy to ensure that the tank was sealed. The heavier BID was used to ensure that all of the small holes that I had created were repaired. 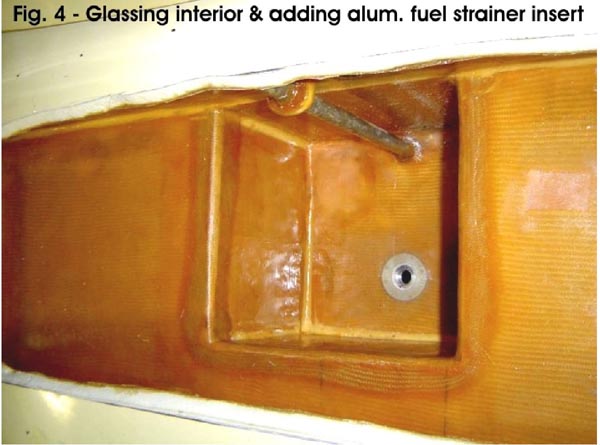 I had a spare Q2 fuselage on which a new inner fuselage top skin (inner, top of the header tank) was layed up. This skin was three ply of BID, again with HEAVY/THICK epoxy to minimize pinholes. This layup was made on the spare fuselage at the exact location that it would end up on the airplane with a layer of plastic between it and the skin that served as a release. The fuselage was prepared with a step cutout to allow this new inner skin to be properly floxed and glassed onto the inner skin of the header tank. The tank was pressure tested to ensure that there were no leaks. If duplicating this repair without the spare fuselage, it would probably be wise to lay up the new inner skin on the top of the fuselage prior to cutting the top off.

The old, per-plans vent that poked out the top of the fuselage (and spilled fuel onto the canopy when full and in a climb) was replaced with a hidden vent. Aluminum tubing was installed into the top, inner skin of the tank (end located inside the overflow tube) and then ran down the inside skin of the fuselage, on the pilot side, down almost to the stringer, then, into the inside of the fuselage. From this point, the vent was run to the bottom of the fuselage and out the bottom (no dips or low points). On top of this inner skin foam was applied and contoured to match the exterior skin followed by two plies to make the exterior skin over the tank. 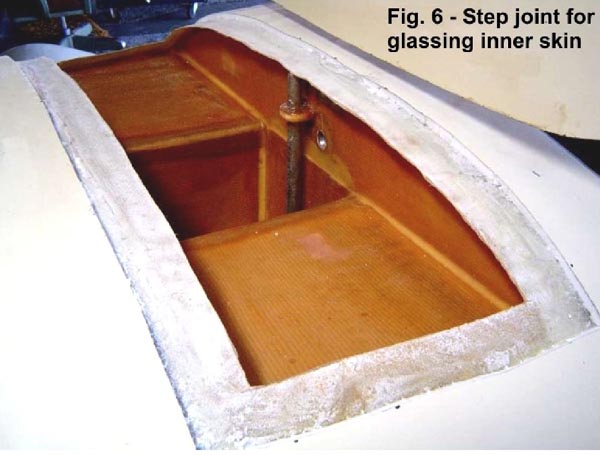 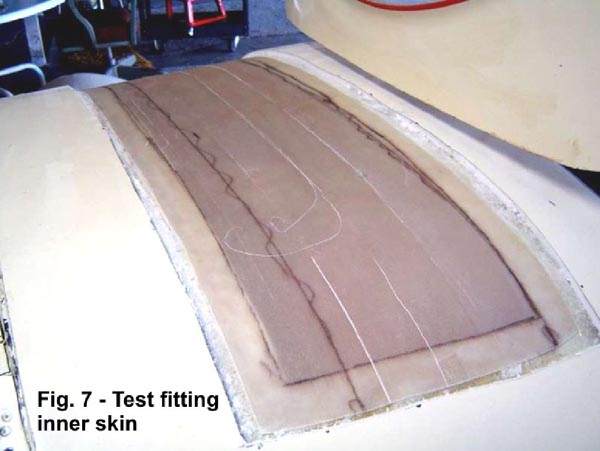 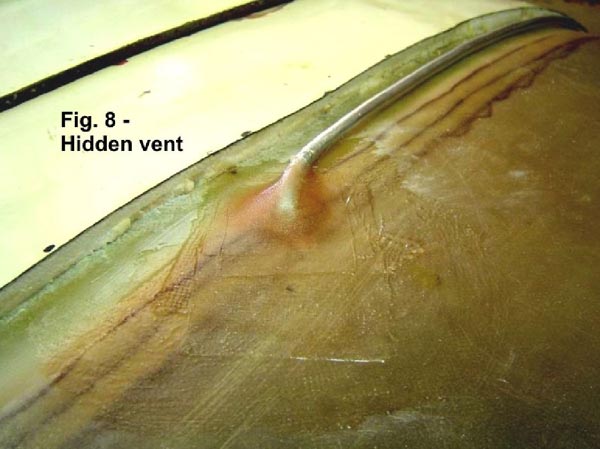 I did not apply the JEFFCO coating suggested by Gary Hunter. I felt that the leaks were due to the previously mentioned construction problems and not due to fuel eating away at the tank. This, in addition to deciding not to use oxygenated fuel, gave me enough of a good feeling to skip that step. Never mind the fact that I couldn't figure out how to properly coat the inside of the tank once I had the top glassed on. I suppose having all of the tank coated except the top skin, would be better than nothing but I questioned the value of this effort given the limited coverage.

Following the repair, I'm happy to report that I no longer have the smell of fuel in the cockpit nor a mushy fuselage. I am fairly certain that the leaks were due to inadequate construction and NOT due to the auto fuel eating the epoxy. However; to be safe, I am using non-oxygenated auto fuel now. There are additional photos on my website at: http://www.finleyweb.net/default.asp?id=182 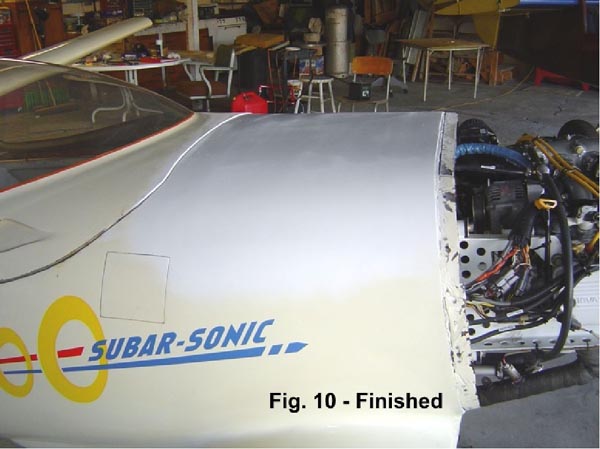 You can order a printed copy of Q-talk #115 by using the Q-talk Back Issue Order Page.