Many thanks for your thoughts, prayers, and support in the aftermath of our hard landing near the Delano, California municipal airport that occurred on August 1. Cherie and I continue to improve and we expect a full recovery. A broken foot bone, brain concussion, torn right rotator cuff (right shoulder), broken sternum, and four-inch head laceration are among the injuries we suffered. I went back to work seven days after the accident. I undergo rotator cuff surgery on September 9, 2005. Considering the extent of the aircraft wreckage, I'd say that we were essentially unscathed 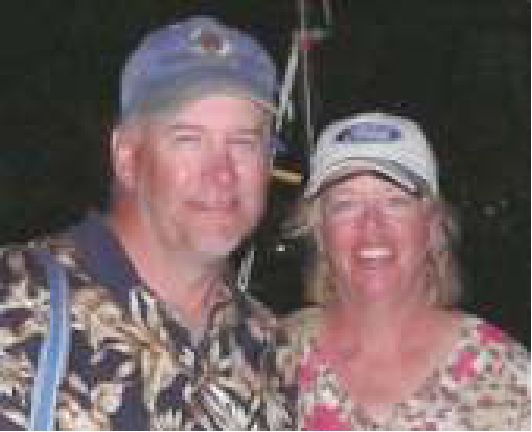 Returning home from a week at Oshkosh, Cherie and I departed Modesto, CA en-route to Ramona, CA by way of Palmdale. We reached 9500 MSL and were all set up on autopilot and were using flight following. We had just been passed over to Bakersfield Approach Control when things got interesting. The engine went from a very smooth operation to a hard ride with lots of engine vibration. I immediately shut down the power and notified Approach that I had experienced a partial prop departure and that I would need to make a power-off landing. Approach advised that Delano was the nearest airport. I plugged Delano into my GPS and made a direct "GO-TO". Once I got dialed in on a "go to" to Delano, my GPS showed a distance of just less than 12 nm.

I managed to keep the airspeed at about 105 mph indicated airspeed. The primary mission statement in my mind at the time was to maintain best glide. Once the airport was in sight I felt very confident that all was in control and that I had plenty of altitude. Approach control asked if I needed anything else and approved me to switch to Delano frequency. Delano is not a controlled field so I got Unicom and advised of my situation.

This is where some bad thinking crept in. I was focused on making a standard landing- enter downwind, turn base, turn final, land. Given the prevailing winds, this led me toward a downwind for runway 32, this while I was practically aligned with the inverse runway 14. Fine, I thought, plenty of altitude, nobody is talking back to me on Unicom, and I don't want to have a head-on with some plane flying out on their departure.

It was early in the process that I realized this was a bad idea and that I ought to go for the airport and land on runway 14. I made an S turn and realigned with runway 14. Second bad mistake! Instead of flying at the airport, I chose to fly "around" the airport to be away from, but aligned to the 14 runway. During this process (third big mistake) I noticed that my airspeed had gone to about 90 mph IAS despite my greatest efforts to maintain 105 MPH IAS. As I came closer to ground level, the sense of motion in relation to closer objects apparently had an affect on my behavior. As well as I know that Best Glide is Best Glide, I found it extremely difficult to recover the airspeed.

It soon became apparent that the airport would not be made. Obstacles came into view. I believe the last decision, though late, was not a mistake and may have been enough to save our lives. A light pole came into view and I resolved that I would not give up any more airspeed. I took aim for a "reasonable place of impact". This meant that I would strike the light pole with the right wings at a speed of about 90 MPH IAS and about 12 feet AGL. I could have pulled up to avoid the pole and then I would have been 60 -100 feet AGL with 15 MPH IAS. This would have almost certainly resulted in a fatal fall.

We ended up clipping off the right wings while almost simultaneously strafing the top of a spear pointed wrought iron fence with the left wheel. Our first impact was at a very shallow angle into the first lane of a four lane street. So far, so good. We then bounced or projected across the remaining three lanes of the street and into a chain link fence, 160 feet of which acted like a net. We finally escaped the confines of the fence and came to rest inverted and soaked with avgas. We were approximately 1000 feet short of runway 14. We talked to each other with "Are you okay?" and "Let's get out!". .

Both of us remained conscious throughout the ordeal. I can remember having an opinion of the severity of the wreck as it progressed first impact, not so bad. Second impact, bad spinning or tumbling. Then the really bad feeling as the back of my head was grinding into the dirt for some distance, really, really bad.

The canopy had departed sometime along the way. I loosened my seatbelt and while freed from the belts, managed to raise the aircraft a few inches with my back against the ground and my feet forcing the aircraft upward. Cherie released and crawled toward me. I had a brief concern that I did not know just how much grinding went on at the back of my head and that I might be in very serious condition. Almost immediately a person ran up to the plane and assured me that my head was fine with just a "small" cut.

We crawled away from the wreckage a few feet and stopped crawling when we noticed an ambulance moving toward us.

We spent three days at Kern County Hospital in the Trauma / ER unit since no open beds were available. The Trauma unit happens to adjoin the Psychiatric Ward and this was largely a source of entertainment. I felt pretty glad to be me despite our circumstances and didn't want to trade places with any of my new friends. We were stacked in with stabbings and shotgun wounds and the nights were filled with occasional songs from the Psychiatric Ward.

While we were in the hospital, my brother Brent, managed with the help of Mr. Greg Martin (Tri Q-200 of Tehachapi, CA) and Mr. Leonard Hall (EAA member # 60, and a resident of Delano) to secure my plane at a friend's house. The following Saturday, I managed to drive up and recover my plane and bring it back home. As of this writing, I have managed to salvage the engine and avionics and I look forward to building or buying the parts needed to become once again airworthy. I hope to make a return trip to Oshkosh in 2006!

Some words about the Q-200 as a crash worthy vessel.

Cherie and I survived a very substantial crash. I am not sure that we would have survived the crash were we in a conventional aircraft. Fuel tanks ruptured. We could have caught fire but did not. The hull fractured at the seat back bulkhead and at a point in line with the instrument panel. Enduring this, we were strapped inside a complete envelope of fuselage into four point harnesses that prevented our bodies from being slammed against external ground and fence features. We could have been trapped by the canopy, but the force of the crash removed it. What little was left of the hull provided us something to crawl out from under with very minor injuries. The fiberglass structure managed to absorb a lot of energy without passing this energy on to its occupants. The fiberglass structure was perhaps instrumental in not promoting a spark trail that could have become a fire ignition source.

Some words on engine out procedures

I would like to think that I learned something about executing a power-off landing. There is no substitute for training. Human instinct drove my behavior into making bad decisions because I was not adequately trained to make a power off landing. My training was defeated by human nature and basic instincts. I believe my (in)ability to maintain best glide is a good example. As I approached the ground, my perception of moving objects took my mind off of maintaining best glide speed. My human survival nature intervened and took control over intellect trying to maintain an established glide speed. Better training could have made a difference. It would have helped if I had spent more time flying toward the airport rather than attempting to fly around it. I had forgotten the drill to land on the first third of the runway and instead focused on what I thought was the threshold.

I would like to encourage everyone to get adequately trained in power off landings from a competent flight instructor. One should absolutely know the best glide angle of one's aircraft; be able to recognize what fields are within glide range, and how to make a successful approach and landing; be able to recognize when not in range of an airfield, and be able to select a suitable off-field landing site and achieve a successful approach and landing.

Best wishes to all and happy and safe flying!