This column is one that I always liked reading. I had met many of the featured pilots but did not know their background and how they came to the Quickie family. I always enjoyed getting to know the pilots a little better. When I took over as Q-Talk Editor, I knew this would be something I would continue. What better way to start than to feature our past editors, Dave & Susie Richardson. I remember meeting Dave and Susie at the 1994 Field of Dreams in Ottawa, KS (I can't believe it has been ten years ago). I also remember every time I saw them, they were together, and after my interview with them it all makes sense. They are a couple, and in my eyes a special couple. Soul mates if there is such a thing.

Dave tells the story of growing up in rural southeast Ohio, in the small town of Cambridge, "Where I-70 and I-77 meet". His earliest memories of airplanes are flying line controlled

airplanes in grade school. He became a "test pilot" at an early age. At his Grandmother's house one summer he met an older gentleman who found out Dave had flown line controlled airplanes before and invited him to "test" his new plane. The aircraft to be tested was much bigger than those Dave had flown before. So big, that it was pulling Dave around the circle and it took everything he could do to keep himself on the ground. Then suddenly the airplane crashed, but it wasn't because of Dave's lack of skill. One of the control lines broke and sent the aircraft to its fate. Flying line control aircraft led to RC flying and he built many aircraft with his father, who was an engineer by trade. He remembers a diamond shaped winged aircraft they made of plywood ribs and cardboard skin.

Dave got mechanical experience around the age of 14 when he and his brother bought a Triumph TR3 sports car. With the help of his dad, Dave rebuilt the engine, brakes, suspension and clutch. This was the car he was driving at age 16! He believes this experience to be invaluable for his Tri-Q project.

Dave's hobbies include music. He started out on the trombone and, in junior high, he started playing bass guitar. He still plays bass today in a church group which does a contemporary service to its congregation. The same group has provided the music to several plays as well. Dave may be a little shy about his singing voice, but it was obvious that Susie thought it was worth mentioning. I think she's been a groupie of Dave's for some time now. But more on that later. Dave and Susie are involved in their church and both sing in the choir. Dave believes strongly that his understanding of music helps him in his profession as a software programer/developer. He believes the logical patterns of music and software coding are similar. He has found that when hiring other programers, the best ones nearly always have a good understanding of music. Dave is a second degree black belt as well.

Programming also began as a hobby for Dave when he wrote a program for his dad's business within the year that they got their first computer. His formal education is a BS in Psychology and a Masters in Rehabilitation Counseling, working with handicapped individuals. He currently works for a small software company in Stow, Ohio where FoxPro is the tool of choice. He finds the counseling background comes in handy working between his company's clients and the software developers. (I'm tempted to work in a handicapped joke here, but I'll refrain).

Like many of us, Dave got the bug for the Quickies by seeing the yellow Q2 on the cover of Popular Science magazine in the early 1980's. But his dream of flying "the small-plane pilot's dream machine" would have to wait while he tended to other priorities like college. Then for Christmas in 1992, Susie gave him instruction books and an instructional flight as a gift. (Way to go Susie!) There was no looking back. He began his lessons the following year and had soloed by April. He had his ticket later that same year in August of 1993.

While the picture of the yellow Q2 got his heart to pumping, he realized it might be better to build a Dragonfly because there was still a company behind the product in the early 1990's. He had purchased the plans and was going through them to make the necessary changes to bring them up to date when his father stumbled onto a pilot in his hometown who had begun a Q2. Dave and Susie looked at it on Mother's Day and picked it up on Father's Day.

The aircraft was on its gear, in the tail dragger configuration. All of the flying components were done, but the finish work was not complete. There were no instruments or radios. Based on having no tail dragger time, Dave decided early on to convert to a Tri-Q .

His favorite part of the building process was the instrument panel. He enjoyed laying it out and says he is on his 4th iteration of the panel. He and his dad had built a Heath Kit TV when he was younger and that experience came in handy when he decided to build his own intercom for the Tri-Q. Those of you who came to the Field of Dreams fly-in last September will remember Dave describing how he designed and built a circuit board for his intercom. He promises an article on this subject in the future. He did want to point out that his homemade intercom actually works!

What is amazing to me is that Dave did all of the work in a one car garage. He did not have the tail on until the project went to paint. This proves that where there is a will (and a loving wife), there is a way . After ten years of building, his first flight came last year on August 7th.

As of this writing, Dave has 2.1 hours on his Tri-Q and his future plans are to convert the power plant to an O-200 as his finances allow. Looking back on what he would do differently, he says he thought outside the box on too many items and, thus wasted time that could have been spent on finishing the project. An example Dave gives is an angle of attack mechanism he worked on. He thought he was working on the plane, but realizes now it doesn't make the plane fly. Dave has a whole pile of these kinds of projects in the hanger that had nothing to do with completing the airplane. He cautions other builders to stick with what is known to work. Dave tried to reinvent several things and a couple flat out didn't work. For example, he designed his own reflexor mechanism. When he asked fellow QBA member and EAA Tech. Counselor, Terry Crouch to inspect it, Terry found a flaw that could have been disastrous.

Dave's mentor was Jerry Marstall. Jerry was just enough ahead of Dave on his own Tri-Q that he could remember how things were done. Dave spent numerous hours in the left seat of Jerry's Tri-Q getting flying experience before his first flight. Jerry is an instructor and likes flying from the right seat, which worked out great for Dave. His advice for all builders before flying your project, is to get as many hours in a similar aircraft as you can, even if its from the right seat. 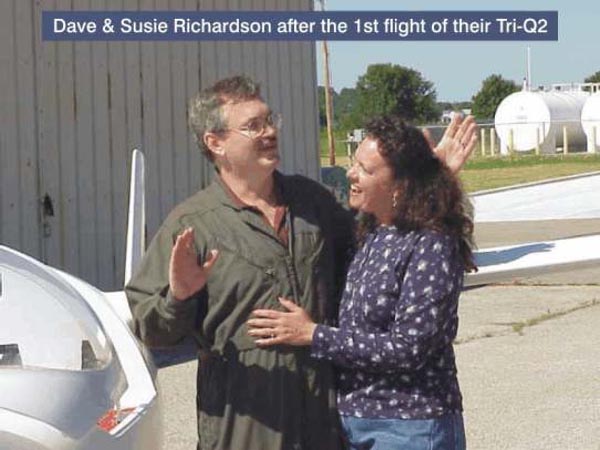 The experience is invaluable. When asked about his favorite tool Dave chose the Dremel, but it was his cheap drill press that he said was invaluable as well. He found without it, he could not drill holes as precise or without them coming out looking like they had been chewed on.

Dave did "hit the wall" in his building experience and the project languished for several months before he would resume working on it. Dave says he couldn't have finished his project without the help of fellow QBA'ers and the Quickie Builders Association. Something you would expect a past Q-Talk Editor to say. But, without the friendships he has made and the fly-ins he attended, it just would not have been possible. He remembers a flight in Bob Malechek's Q-200 while attending a Field of Dreams Fly-in where he realized this little airplane was doing 205 mph with "two big fella's" on board. He was forever impressed.

As I sat eating supper with Dave and Susie during Sun 'N Fun, I was impressed with their relationship. Dave tells the story of how they were at a dance in Jr. High and he found himself smitten by Susie. Towards the end of the dance, he asked if he could walk her home. She said no! Dave was crushed. (Many of us have been there Dave.) Well, what Susie failed to mention was that she lived a couple of miles out of town! Information Dave could have used! Several years later, Dave was in a band and Susie became the groupie I spoke of earlier. They always fall for the guys in the band!

I mention their relationship because it is obvious to me that Susie supports Dave's project and does so with genuine love. These two people care for each other and their support for each other should be admired by everyone. Susie helped Dave as editor of Q-Talk during these past few years and we should all thank her for her efforts next time we see her.