(Ed Note: After Earnest Martin wowed the crowd at Sullivan last year, I had a chance to interview him to delve into some of the secrets that helped make his Tri-Q200 such a beauty. This is what I learned.)

Earnest used PP&G's Concept polyurethane system on his plane. He stressed how important it was to use a primer and a paint that are designed to work together because that makes everything last longer. Going back to the basics was very important for Earnest in removing the old paint and prepping the surface for the new finish. He first scored the topcoat with 40 grit sandpaper, using a small rubber block to break up the paint. While he may have scratched the primer, he was only trying to remove the topcoat, at that point. He then moved on to 100 grit sandpaper to remove both the topcoat and the primer.

When the surface was exposed, he microed any low spots and sanded the plane with the 9 x 9 square block from the construction manual. He used the 45? one direction, 45? the other direction, front to back and back to front techniques described in the finishing section of the manual. For example, he would go down the wing at 45? one way and come back on a second pass with 45? the other direction, etc.

To test the surfaces for imperfections. Earnest found that he could tell more if he had a thin cloth or glove between his hand and the surface than if he just used his bare hand. If he could feel something, he would either fill or sand the area until it was smooth. He went from 100 grit to 220 and then 320 sandpaper before he was ready to prime.

Earnest primed his plane in his basement one car garage and shot his topcoats in his two-car garage. In both locations, he placed furnace filters over one set of windows and used a window fan to force the air out of another. That way, the moving air was filtered and the fan was not blowing directly on the plane. He covered the walls with heavy plastic to protect them from overspray. To prep the floors for cleanup, Earnest found a 3M product called Overspray Masking Liquid-Dry part number 06847. It is soap based, inexpensive and sold by the gallon. He said he only used about two quarts to cover his two-car garage. He applied the product to the floor with a sponge mop until there was a thin film. Later, after painting, only a water hose was needed to clean the area. The excess paint went down the drain. He used a high pressure paint gun on the plane primarily because that was what he had experience with in the past. He also used a Hobby Air respiration system due to the VOC's from the polyurethane and said he never smelled any fumes. Tie wraps were used to join the Hobby Air hose and the paint gun hose so he only had to manage "one" hose. 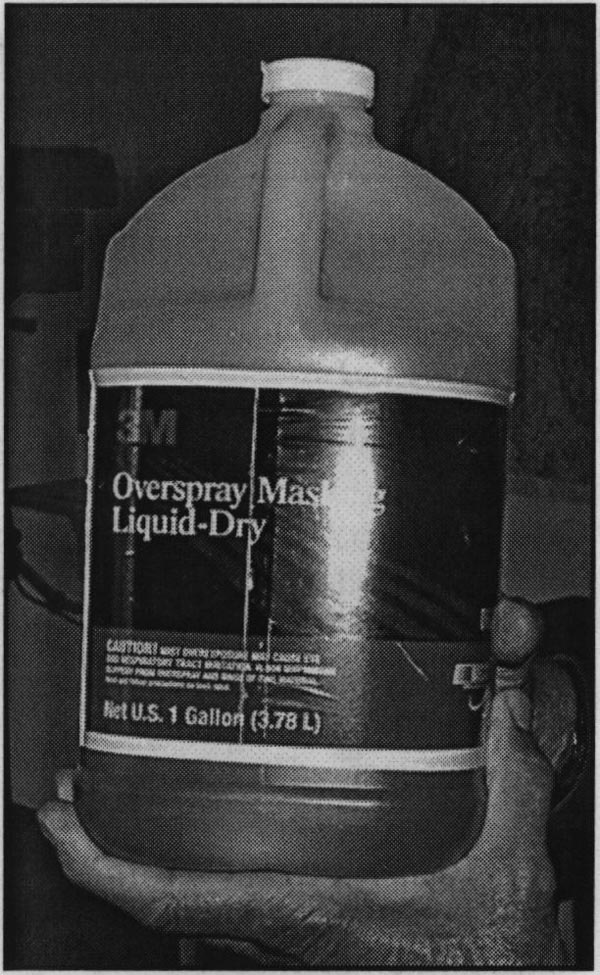 Since Earnest had adhesion problems in the past, he decided to stack the deck a bit by applying a couple of layers of adhesion enhancers prior to priming. The first thing he sprayed was an adhesion promoter called Bulldog. He said he used about two quarts for the whole plane. The fairly thin coat went on much like a clear coat. After letting that dry a couple of hours, he sprayed on a black epoxy primer for UV protection and to aid in the adhesion process for the polyurethane primer. The following day, he sanded the rough spots in the epoxy primer and re-sprayed only those areas, as the epoxy primer was not really a sanding primer. Two coats of the PP&G Concept primer were applied 24 hours later. He sanded with 320 grit paper and re-spayed any spots that got too low. He liked the PP&G primer because, after letting it dry a couple of hours, it could be sanded on the same day. 320 and 400 grit paper was used to ready for the plane for topcoat. 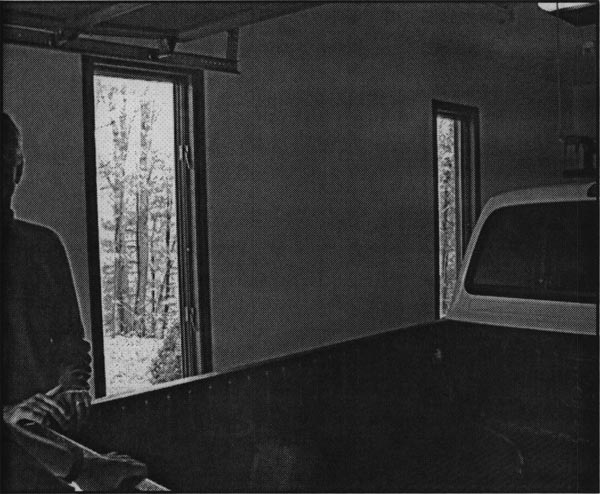 Earnest made some jigs to help paint various surfaces on the Tri-Q200. He removed all the control surfaces, the canopy, tail and nose gear. He made posts out of 2x4's that connected to the motor mounts and aft the split line. This allowed the plane to be tipped forward and aft while still being held off the ground. He suspended the tail cone horizontally from the ceiling with the vertical fin upright. A bar was fitted into the upper rudder hinge pin to attach a couple of wires. He also suspended the front of the tail using the plates for the tail attachment screws. The tail was suspended only about 3 Vi feet above the floor so he could easily paint the upper surfaces. He squatted down to paint the underside.

Through experience, Earnest learned that if he tried to paint too much in one day, he would become fatigued and the results would suffer. He found that he painted best in the morning when he was freshest. The night before, he would tape everything off to ready the plane for the next day's work. Repeating this pattern of prep in the evening and then painting in the a.m. worked very well. This was done until all the colors were applied.

Earnest sanded everything with 1000 grit paper before he shot two coats of clear. If he had any overspray areas in the clear coat, he would sand out the problem with 1000, 1500 and 2000 grit paper. Two different grits of buffing compound were used to get the highest gloss. He also used this technique on the wing and canard to get the lowest possible drag on those major flying surfaces.

I want to thank Earnest for this interesting peek inside his paint booth. He obviously knows what he is doing. He has a gorgeous plane to prove it. This information might give some of us a chance to also have good results, now that we know how it should be done.