When a compass is installed in an aircraft, the many ferrous parts of the airframe all exert their own magnetic influence on the compass causing it to exhibit errors which may be as large as 30 to 40 degrees in a poor installation. All aircraft compasses are provided with correcting magnets mounted integrally with the compass. These can be adjusted by the calibrator to create an exact opposite magnetic field to that caused by the random ferrous parts of the aircraft thus allowing the compass to respond accurately to the earth's magnetic field. This process is called swinging the compass and the procedure is covered in this Data Sheet.

The items required are:

An accurate means of determining the aircraft's magnetic heading. This is usually provided by means of an external prismatic-type compass of known accuracy.

A suitable instrument for adjusting the compass. This may be a non-magnetic screwdriver, in the case of an Airpath-type compass or a special triangular key for an E2- type.

A means of recording the readings and calculating the co-efficients. A suitable pro-forma is attached which can be downloaded and printed out. Begin by obtaining access to the compass adjusters. They are usually two screws marked *N-S' and 'E-W' under a small metal plate on the front of the compass housing. Check that they are both set to zero. Normally this is indicated by a line engraved on the adjusting screw head so that it lines up with two lines scribed on the compass body. The aircraft should then be taxied to a non-active part of the airfield, well away from hangars and other metallic structures. Check that no "PSP" or similar steel reinforcing mesh is buried under the ground. Grass or tarmac areas are to be preferred; concrete dispersal pans will probably have steel reinforcing buried in the concrete. The aircraft should ideally be in operating condition with engine running and all electrics, radios, etc., switched on.

The swing is carried out in two parts: a four point correcting swing followed by an 8 point calibration or check swing. Start with the aircraft heading North. The heading does not have to be spot on as the calculations will take any minor errors into account. Note and record the actual aircraft's heading by aligning the prismatic compass datum with fore and aft datum points on the aircraft; the best ones being the propeller spinner in line with the top of the fin. Note and record the aircraft compass reading. Turn onto East and then onto South repeating the procedure on each heading. After recording the readings on a Southerly heading, calculate coefficient C as shown on the pro-forma, change its sign and apply the correction exactly as shown. Without moving the aircraft, turn the co-efficient C adjuster (it may be labeled either 'C' or 'N-S') until the aircraft compass reads the correct heading as calculated on the pro-forma.

Turn onto West and repeat the procedure, this time calculating co-efficient B. Once again adjust the aircraft compass but this time using the co-efficient B (or 'E-W') adjuster. The compass should now be correctly adjusted and if you wish, you can carry out an 8 point calibration swing to determine the residual deviations which should be plotted on the pro-forma to prepare the compass deviation card. Do not adjust the compass on this second swing; if you are not happy with the calibration go back to North and carry out another correcting swing.

This pro forma data sheet can be downloaded at: 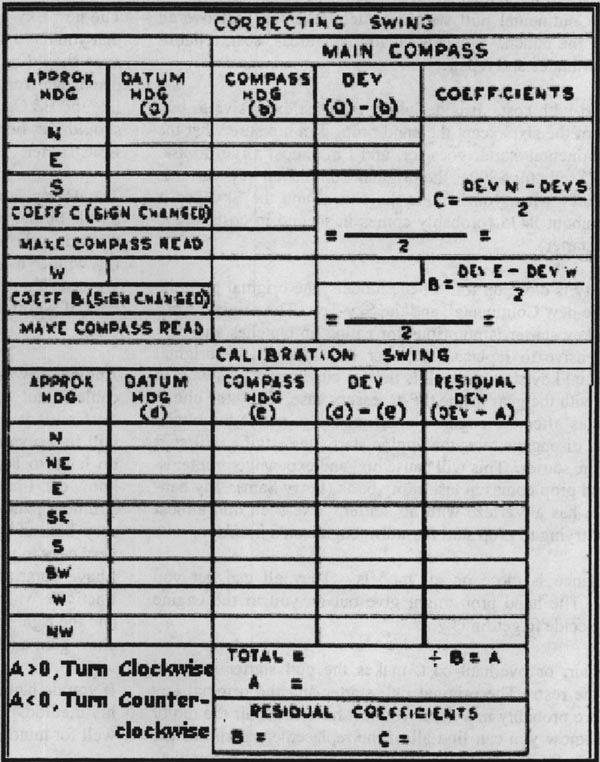