On June 29,2001 at the Mattoon, IL fly-in, a very special event happened in Q aviation. Two Q1 drivers, Terry Crouch and Keith Welsh, swapped planes. The pilots were asked to record their observations for Q-Talk, comparing the ground handling andflying characteristics of the two planes. 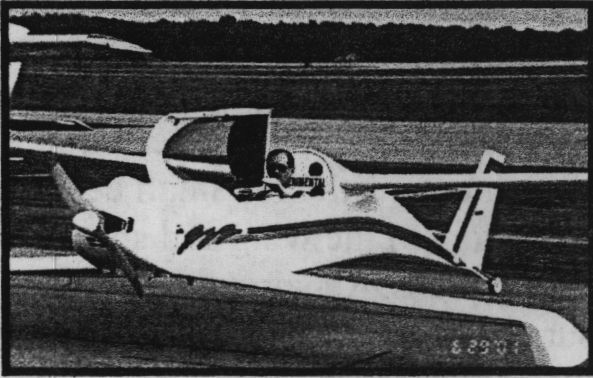 After adding weight to Keith Welsh's plane, I had the opportunity to fly his Q1 for about 20 minutes. The main purpose of the flight was to see if there were any obvious flight differences between his GU canard and my LSI canard. There were two differences that I noted, both related to the low speed end of the envelope.

The second difference was the LSI will start to pitch buck very slightly at 53 mph indicated. If you keep coming back on the stick, the amplitude will increase to a very noticeable level, at about 48 mph indicated. Keith's GU canard pitch bucks at a quicker rate, but the amplitude of the pitch bucks is fairly small. Adding more aft stick does not seem to affect it much.

When examining the ground handling differences, first it should be noted that my LSI has a slightly less ground angle of attack. The main axle location is 1 inch forward compared to Keith's plane. This is per plans. My LSI has a reflexor and a softer tail wheel tire.

When landing my LSI, I transition from very good rudder control, to just driving it with the tail wheel. The only time I feel my tail wheel skid is in very gusty, direct 15-20 kt. crosswinds, before I break ground or after I touch down. After landing Keith's GU, with no crosswinds, I felt the tail wheel sliding around. I added power and purposely swerved back and forth SLIGHTLY to get a better feel for this. I seemed to be able to slide the tail wheel a lot during the rollout. It did not give me the rock solid feel that my Q does in this speed range.

Another difference I noted was in the pitch stability between the two airplanes. I was unable to get Keith's Q

trimmed for hands-off flying. This was difficult because his Q has a handle that you pull or push while you turn to lock or unlock. I found it very hard to make fine adjustments.

I really like the toe brakes on my LSI Q. They offer another option for directional control, if you are having a bad day. My original designed tail wheel, with some caster, seems to turn much quicker and tighter than Keith's stock tail wheel. Maybe someday I can talk him into measuring his turning radius and we can compare.

These comments are from one short flight. I am not a test pilot. The airplanes did not get a precise weight and balance that evening. My conclusion, they both fly great and if I was building another one right now, I would use the same axle location as the LSI and definitely install a reflexor. Thanks for the opportunity to fly your Q, Keith. 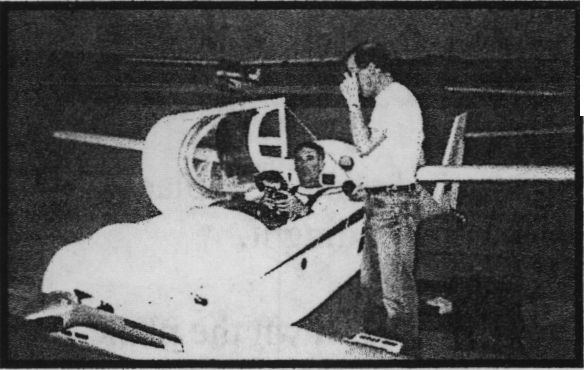 Regrettably, due to the personal weight difference between Terry and me, I was unable to actually fly Terry's N14TC Quickie. I would have loved to have had that opportunity. However, I did get the chance to do a series of taxi tests in his airplane. It is interesting to note that Terry and I fly at

. nearly the same gross weight, which made it | easy for him to fly 94K.

The difference in the axle location of the LS canard, which adds weight to the tail wheel, along with the larger surface area and softer tail wheel, changes the ground handling at all speeds between the two planes. I found 14TC to be very controllable at any speed, to the point of being ridiculously easy, even when nearing liftoff speed.

Personally, 1 have mixed emotions about differential braking. My main concern is that with large rudder deflections during the early landing phase, typical with tail draggers, a brake could be inadvertently stabbed, resulting in loss of control. This almost happened to me in my Cessna 170. I have learned to keep my feet low on the pedals.

I found that I would veer off centerline easily with the slightest touch of one of Terry's brake pedals. Though I am hesitant to add differential braking to 94K, perhaps with more practice, I might feel differently . Overall, I found Terry's plane responsive to input and controllable. I would just need to be careful when applying the brakes.

In retrospect, the seemingly little things, like axle location and tail wheel type would be a priority plans change to aspiring builders today. I want to thank Terry for allowing me to taxi his Q. It was a great experience.

You can order a printed copy of Q-talk #89 by using the Q-talk Back Issue Order Page.