Numerous methods exist to determine airflow patterns over an aircraft. Smoke is used in wind tunnels; tufts in combination with high-speed video; and computerized visual modeling are all common. The only method that I am aware of that is cheap, easy, and can be accomplished by a single individual is oil flow testing. The test is performed by spreading oil over the area of interest, flying for a period of time, landing, and immediately taking photographs (before the oil has had a chance to flow due to gravity). Our CSA brethren (Central States Assoc. - EZ types) have learned that used, dirty engine oil works best and that a minimum of 20 minutes of stabilized flight (in whatever regime is being tested) is required. Some will recommend as much as an hour. The goal is to provide the oil enough time to flow to match the airflow pattern AND disperse to the point that, upon landing, gravity doesn't cause the oil to flow straight down and skew the flow results (although it is difficult to avoid this entirely). 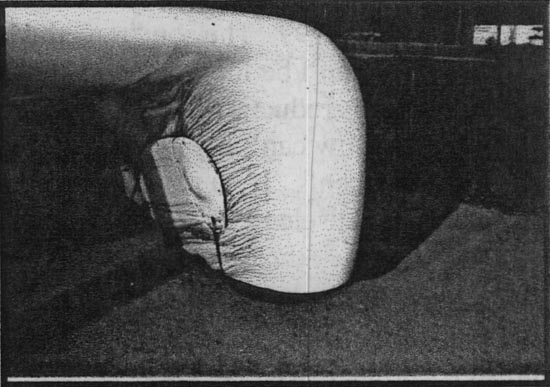 Who cares? I submit that we all care. The reason to perform such a test is to determine how "smoothly" the air is flowing over the aircraft. When airflow separates from the aircraft, drag is being produced. Identifying the areas of separated airflow allows us to come up with a "solution" which yields a more efficient aircraft. Whether you choose to use this efficiency to go faster or to go the same speed on less fuel (gain endurance) is up to you. We can all use the results from testing such as this to build better airplanes and/or fine-tune our airplanes.

Areas such as wheel pants, fuselage split line, wingtips, cockpit air exhaust, and wing/canard fillets are all potential big drag producers on our airplanes. One of our problems is that no two airplanes are created alike. This has caused a quite a number of theories about what is efficient, how to go fast, and what is form versus function. Our goal is to create enough oil flow documentation to allow conclusions, or at least logical theories, to be formed about how to make our aircraft as efficient as possible.

The common stuff: Will oil damage my airplane? That is up to you to decide. I have performed several of these tests and have talked to dozens of people that have performed them and have never heard of paint damage (such as staining). Is the oil messy? Yes. Is it hard to clean up? Getting it off the aircraft isn't too bad. Generally some paper towels will get the majority of it and good soapy bath gets the rest. Sometimes oil is deposited in the nooks and crannies (split line, elevator hinge gap, etc...) and shows up for months. Are you going to cover the canard and wing with oil? No, absolutely not. Where oil is put is up to the pilot. I would suggest the wheel pants, wing tips, wing fillets, and canard fillets as a starting point. There are other places that are of interest if the pilot is willing (entire tail cone including vertical fin, cowling, and belly).

So, for Ottawa 2001, we have planned an oiling party for Friday afternoon! A team of volunteers has been beaten into service to oil airplanes, take pictures upon landing and help clean up the mess. If you are interested in participating with your airplane, please contact Jon Finley at This email address is being protected from spambots. You need JavaScript enabled to view it. or 952-423-6391.

You can order a printed copy of Q-talk #86 by using the Q-talk Back Issue Order Page.