In the last issue of Q-Talk, I described developing a plan to help define goals for our group regarding the transition of builders and non-builders to Q-Pilots. Terry Crouch called me soon after receiving his issue and we discussed some ideas and directions. Terry suggested gathering in one place all the QAC Plans Changes, "Unofficial" mods that most builders incorporate and some of the most common solutions the Q community has developed to deal with design issues. This would allow builders to request needed information from one source. I suggested to Terry that we also develop a videotape series on performing a thorough annual inspection of each of the major plane types to help an A&P know what to look for when inspecting a Quickie. We also agreed that the program being developed by the Central States Association for EZ-type aircraft for their non-builder owners would be a good example to follow. These ideas were introduced to the members present at the Sun 'n Fun forum and they were supported. Again, I ask for you to think about and contribute ideas on how to keep our members from banging up their planes and improving the general safety. Mattoon will be our next opportunity to discuss this face to face, so have your ideas ready.

About two weeks after we published our concerns about this subject and the effects on insurance rates, A VEMCO decided to stop insuring new policies for many homebuilt aircraft including Quickies. Their reasoning was that over the past 10 years they paid out 150% of what they received in premiums. After a few weeks of petitioning by their partner, EAA, AVEMCO changed their minds again and made policies available for liability but no hull or passenger coverage. WARNING: If you are currently insured by A YEMCO, DO NOT let your policy lapse because you will fall under the new rules for the restricted and more limited coverage. AOPA stated they may have sources for substitute policies for those dropped by A YEMCO. Contact AOPA for details at 800-622-2672 and ask for AOPAIA. 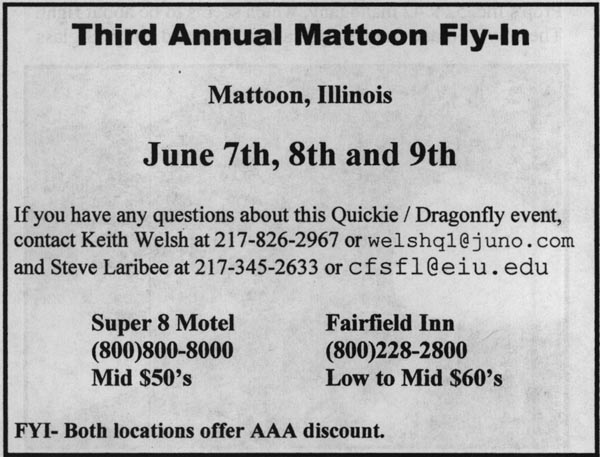