[Editor's Note: Congratulations to Mick Davies for completing a successful first flight in his U.K. based Tri-Q200! Keep up the good work, and keep us all posted on your progress.]

Well, a bit of good news!

G-BWIZ Tri Q200 flew for the first time today (it flew a few hours in 1998, but first time for me after buying it several years ago) from Turweston in the UK. I bought it dismantled from a shed. I have had the engine overhauled and new instruments put in as the previous owner took them for a new machine in New Zealand.

When I originally got permission to test fly it wouldn't get airborne and "wheel barrowed" down the runway.

After fitting a bigger diameter tyre the nose lifted by 1 inch. I was able to do this with a new nose fork from F.L.A.P.S. which was 5in in width rather than 4in to allow a bigger wheel. The reflexors were unsiezed (def set them trailing edge up for take off), and 4kg of ballast in the rear to bring the c of g aft.

Rotated at 70 kts and smoothly drifted into the air. A small check forward on the stick only was required. 1100fpm rate of climb at 80 kts. Downwind the airbrake was deployed, crossed the hedge at 80kts for an uneventful landing. Used the air brake when doing the downwind BUMFITCH checks and left it out until landing. Made very little difference handling wise but enabled me to go over the hedge at 80kt, land and stop easily in 400m. Back to the hanger, that's enough for one day and I need to check it over after the first flight! I took a video during the flight and posted it to Q-tube. [Click Here]

Thanks to all your comments and Gary McKirdy's advice. Got several hours of testing stipulated by the LAA but nothing I wouldn't do anyway.

[ Editor's Note: I was unfamiliar with the BUMFITCH acronym, so I looked it up for all of us that learned something else here like GUMPS. ] 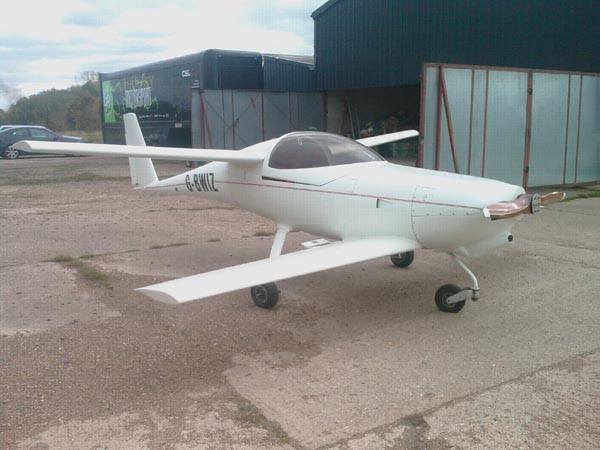