An Aussie's Guide to Homebuilding the Quickie 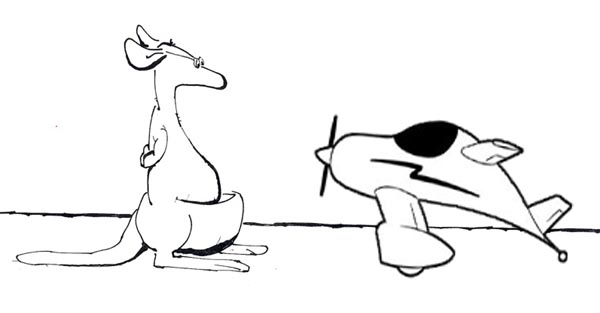 One of the biggest problems with building an aircraft in Australia is that almost every part has to be imported. The reason is simply that we don't have a local aircraft manufacturing industry, ignoring latecomers like Jabiru. Yes, in the days of rag-n-tube we had RAAF training aircraft like the Winjeel being built here, and there was also Victa aviation, but they weren't really relevant to the homebuilt movement, especially when it comes to using composites.

Over the years I've managed to pick up various booklets at air and trade shows covering aramid composites, honeycomb panels, kevlar and all sorts of aerospace goodies, but when you ring the suppliers the answer is always the same: "We don't stock that here, it has to be ordered, there's a minimum quantity requirement, blah blah blah." All they're doing is touting for the airline repair supply contracts, which is their bread and butter. Nothing is ever stocked locally.

So, you have two choices and they are Wicks Aircraft Supplies, or Aircraft Spruce & Specialty. Wicks are almost always more expensive and their range is quite poor. An AS&S distributor was recently appointed in Australia but there's no added advantage in ordering from them at all.

One of the biggest costs is in shipping the large parts. This applies to foam, 6' lengths of Aluminium tubing and spruce, engines, and with the new hazmat regulations it also applies to resins and hardeners. Even with a favourable exchange rate, shipping big boxes of materials 6000 miles is gonna get you, it will blow your budget. That explains in a large way why I still don't own an airplane after an interest spanning 35 years.

So, let's take this one item at a time. Firstly, timber can be found locally. It may take some time but there are suppliers of boating materials who can get you longerons and plywood of the right specification. In some cases it may not be marked for aircraft use but it will be fine. During the materials shortages of WWII the CSIRO Division of Aeronautics and of Forest Products found that Victorian mountain ash and Queensland hoop pine were acceptable for primary structures, whilst coachwood was a suitable substitute for imported birch plywood. A number of native Australian timbers were identified as spruce substitutes and details published as emergency wartime specifications (e)2D-811 for hoop pine, bunya pine, Queensland maple, bollywood, silver quandong and silver silkwood. (The Australian Standard for Aircraft Materials (1944)).

In the past few years there has been an upsurge in the manufacture of foams here. Most are unsuitable for aircraft, and even if you do find an equivalent product the supplier may only have it in 8' x 6' sheets. There are no building requirements for styrofoam insulation because of our warm climate, unlike the Northern hemisphere, and the market in marine uses is so small as to be negligible. Finally most only make white styrofoam, that bubbly crap used for disposable coffee cups, and have no idea about structural foam. Neither Dow Chemicals nor any of the other large manufacturers are even represented on this continent. What do we do? Well, I persisted until I found a small company that wirecuts aircraft wings for scale models and asked him where he found Styrofoam LB, which is what he uses and also what we need. He referred me to http://www.aus-styrene.com.au and I'll be making enquiries later this week. They also supply polyurethane sheet. If you do order locally be sure to specify the original material by name and the density, which is very important, and if it looks even slightly wrong DON'T use it.

Aircraft grade aluminium isn't made here, just forget ringing Capral or someone like that. Hell, they're so bad I don't even ring them for regular low-tech materials. (Don't ask, it's a long story.) Again, shipping long pieces will break the bank. And yet we've had innumerable small companies building and supplying ultralights over the years, so where did they get materials? The short answer is that in some cases they cheated and used spars for yachts, bought from ships chandlers. In other cases they geared up for production and bought bulk lots to keep costs reasonable. You can get aircarft aluminium here, but it will probably cost the same in small quantities as importing the stuff directly because that's where it came from in the first place. My only advice is to scour the magazine ads for the SAAA and AUF/RA-Aus and larger aero clubs like Holbrook and try to scrounge the biggest pieces locally from someone else's left-over materials.

Ther's no point scrimping on hardware. When it comes to bolts, nuts, shackles, thimbles and washers you might as well buy new from AS&S. Total cost is so low as to be reasonable and you're almost 100% sure to get traceable and proper parts. However, eBay could be the place for instruments, especially the newer EMS and EFIS panels which are light, pretty and most often cheaper than the analog "steam" gauges of yore. And often you can buy a rebuilt and TSO'ed Altimeter or Airspeed gauge for the same price as a new non-TSO'ed item.

Having checked all the resin manufacturers here, I can state unequivocally that none of them make aircraft grade resins, and none of them stock it either. The closest is West Systems who make boat resins, but they're only good for finishing on an aircraft and should never be used for the actual structural work. I wouldn't even keep it in my shed in case the temptation to use it got too bad. Order the right stuff from AS&S and wait the three months for it to arrive, there's really no option. But remember that it has a shelf life, so unless you're building the whole airplane at once I suggest buying only a gallon or two at a time.

Now we come to engines. Well, anyone who has built an airplane will tell you that developing your own aircraft engine is a nightmare. Even if you have extensive motor racing experience you still have NO idea how different the requirements are for aviation. And yet there aren't any more Onans, are there. And there aren't cheap 0-100's lying around for the taking like in 1970 either, so this has to be solved as well. There have been some inventive solutions over the years, but in the 20-50hp range there's still a huge need for reliable products. Look at V-twin generator motors like the Subaru Robin EH72, which at $1365 is a bargain, and generates 25hp at 3600rpm. Also look over the Suzuki GEO engine and those from the smaller "kei" cars like the Might Boy. These are reliable and modern engines that can really take the heat. Forget VW conversion, mini-radials and Wankels, no-one has got them right yet and they probably never will. Also skip most of the ex-military genset motors like the Teledyne 4A032 because they just don't develop enough power. As for 2-strokes ... isn't the whole idea of building your own plane so you can save running costs? OK, if you happen to have an old Rotax 377 or Bombadier ski-doo engine just lying around it's tempting to use it, but in the long run you'll be limited to circuits of the field until you get something more reliable. And the extra cost and weight of the redrive system makes a joke of the potential weight savings anyhow.

If you're still crazy enough to want to build you own after all this, just go ahead and do it. The regulations are a lot less stringent since 1998 and no longer do you need to have staged inspections supervised by CASA or the SAAA unless it's a "first of type" airplane. Join RA-Aus, ensure the aircraft you plan to build is acceptable on their register, and then just call them again prior to applying finishing materials (or prior to closing in the case of timber/rag/tube planes) and let an inspector take a look over it. That's all you need to do now. After finishing it off, call them for a weight and balance and sign-off, and go flying.

There's one more possibility, and that's to buy a project that requires finishing. Well, I tried that too. The $3500 damaged Quickie I bought from a guy in New Zealand stayed there because it would have cost me another $4000 to ship it here in its own container. And even if you find a bargain, most times the build documentation isn't good enough to allow you to pass the "50% homebuilt rule". Besides, do you really know what you're getting into with that? Unless you really know the airplane by having built one from scratch first I wouldn't recommend going this way.

Hopefully this has given potential builders outside the USA some food for thought, and inspired one or two to take the plunge into homebuilding. I'm always happy to answer questions on Quickheads.com and if you're near Melbourne gimme a call, I'd love to see your project!