About a year ago, I had asked the forum and got a reply from Lynn French. His plans are now on the website. The only reason I did not go with his idea is that I do not have a welder or the experience to use one.

Instead, I came up with the following concept. Basically, it is a block that sits under the straight area of the main gear. It is kept from slipping by highly tacky foam and a 3/8 inch high “stop”. I used a block of blue foam covered with bid and shaped so that the long side fits against the bottom of the gear leg and a flat spot for a conventional jack (scissors or hydraulic). With my first attempt, I didn’t want to put a stop piece on the gear to keep the block from sliding up. I didn’t want to increase drag! Well, that sort of worked, but I had to use a “sticky” foam (aka exercise mat) between the gear and the block and then use a strap to tightly bind the gear and the block. With this, I was able to raise the wheel, but with no engine or instruments, I only had a weight of about 150 pounds. 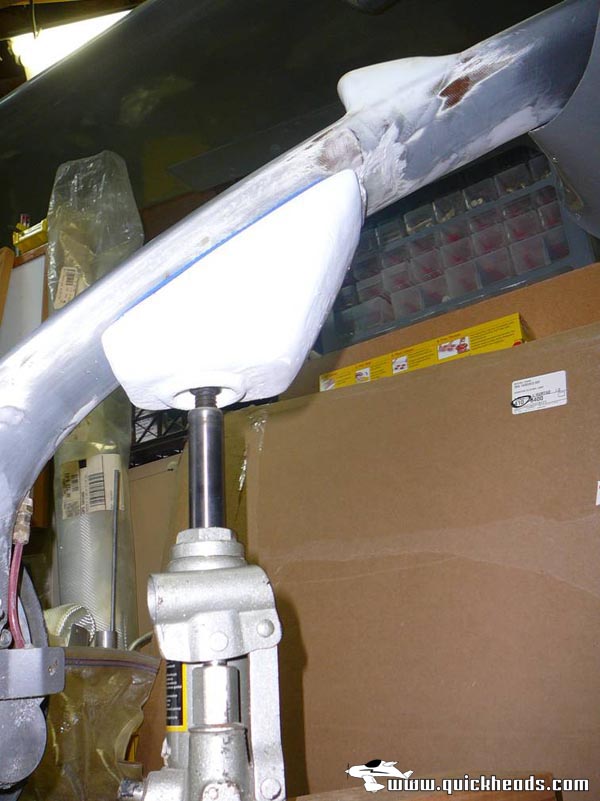 Above is the final block. I hope that seeing the finished product in advance of the construction steps, may make it easier to visualize. I did a little test and estimate that I had about 500# on this jack. (I actually measured 325 #, but that was the limit of my bathroom scale). Note the step on the top side of the gear (more on that later).

I started with a block of blue foam. I taped a piece of sand paper to the underside of the gear, then swiped the block of foam until I had the shape transferred to the foam. Then I started carving the foam to a width a little less than the gear and the length about 10 inches. The trickiest part is to create a “flat” portion where the jack will sit. This should be parallel to the ground. I just held the block in place and put a level on the flat area to check if it was level and carved. 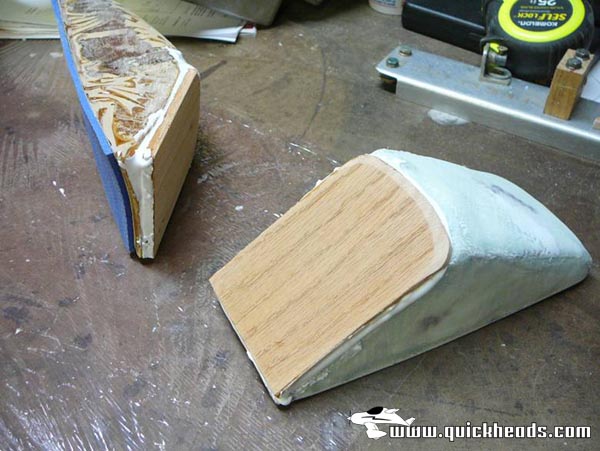 OK, so now we have a block of foam. I realized after my first attempt that I needed to put a piece of wood on the flat area. I used a piece of ¼ inch Oak I had lying around. Of course, I micro’d the foam before putting the wood in place. 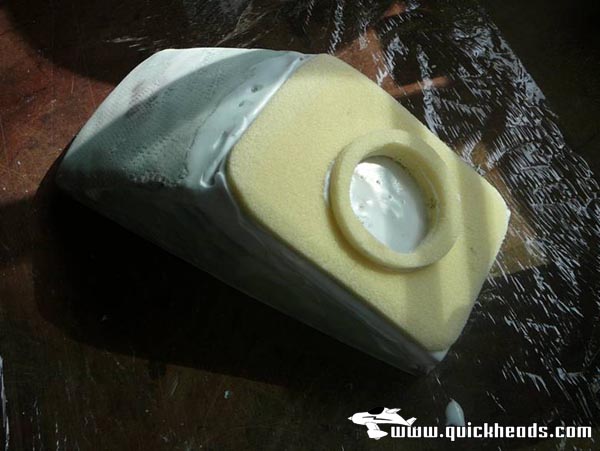 Now, in order to ensure that the plane does not slip off the jack, I created a ½ inch cavity on the wood. I did this by placing a section of ¼ inch Last-a-foam over the wood. I then cut another piece of Last-a-foam that is about 2 inches in diameter and put that on top of the first piece of foam. Of course, I had cut a hole in both pieces for the business end of the jack to sit. I then added another 2 layers of glass over these foam pieces.

The next step was to put glass over the whole block. If you have a “significant other” who happens to be a seamstress, that might be helpful! The block is a rather odd shape, so cutting the glass for it gets a little complicated. I cut the two sides and the bottom first (the easiest). Since I don’t have a seamstress available, I had to tough out the harder part. I didn’t want to experiment with wet glass, so I took some plastic and practiced making a pattern to cover the top. If you look closely at the photo below, you maynotice a black line around the block. 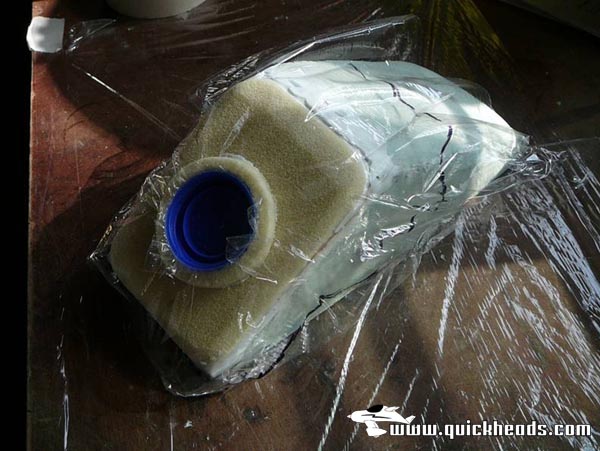 Then it was just a matter of copying the pattern to a piece of plastic and then cutting it out after adding theresin. 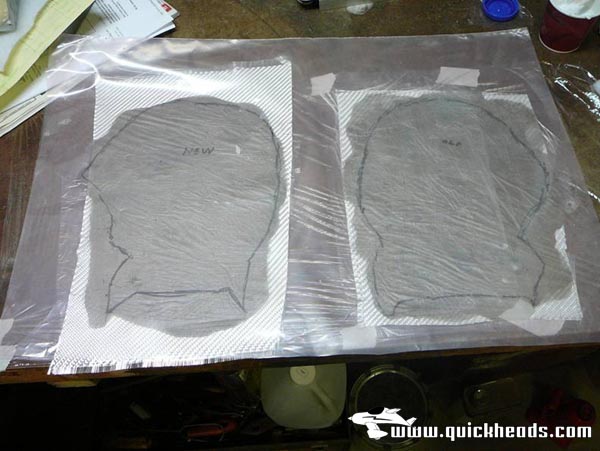 I have one advantage; I have enjoyed using my vacuum bagging technique. For this odd shape, the vacuum worked very well. As you can see from the photos, I actually created two jack blocks. The main reason I decided on two is that I will eventually need to weigh this bird for W&B. On yes, one of the other advantages of this type of “jack” is that it is very light and may be carried in the aircraft in case of a flat. It’s generally pretty easy to find some sort of hydraulic or scissors jack. 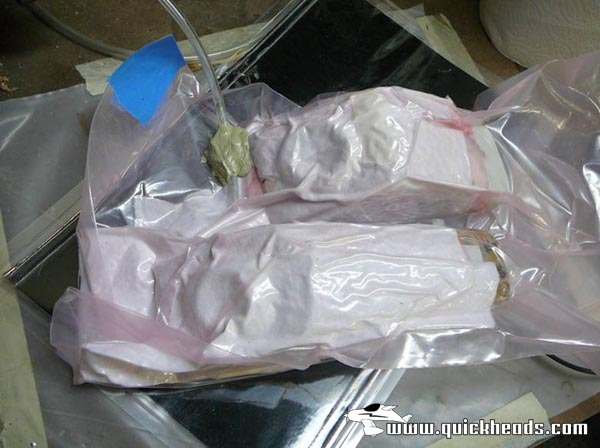 A Step For The Tri-Q Main Gear.

One of the very first projects I got courage up for was to create a step for each gear leg. I must have made 5 different ones before I finally settled on this size and construction. I was (foolishly) overly concerned with drag. So when one of my very small steps almost caused me to slip off, I decided safety was more important. 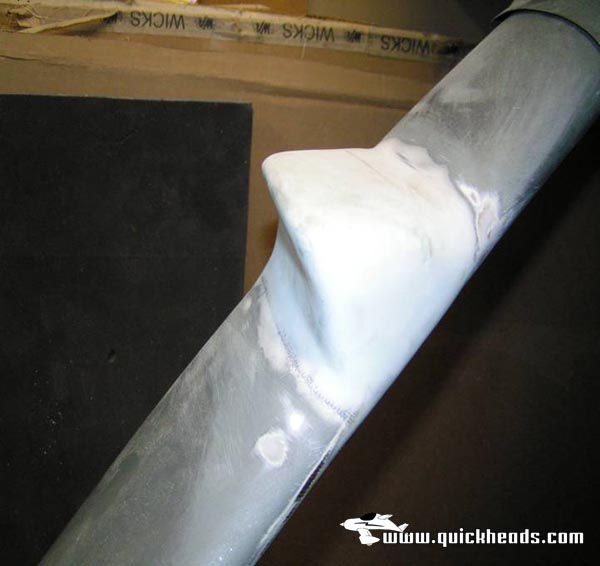 The process was essentially the same as for the jack blocks.