Jon Finley has been involved with the QBA since purchasing a partially built Quickie (Q1) project in 1988 while living in Montana. After finishing that project with a Cayuna engine, it flew twice before being converted to Rotax 503 power. After flying for 250 hours behind the Rotax, it was time for another change. A four-cylinder 1835cc VW was installed and transformed the Quickie into a heavy but great performer. Flying the VW-Q1 continued after relocating to Minneapolis in 1995 until a hangar mate made Jon a deal on a Q2 that he couldn't turn down. Jon sold his Q1- "Thunder Quickie" after almost 500 hours of flying. Flying behind the Revmaster powered Q2 lasted a couple years. Then it was time for a change due to the poor performance. A direct-drive,carbureted, turbo Subaru EA-81 was installed and flown for a short time. Then came the current engine. Still in Minneapolis, that conversion took awhile to complete due to some of life's common interruptions. For the last two years Jon and family have lived at an airpark south of Albuquerque, NM and the Subaru/Q2 progress has taken off again. 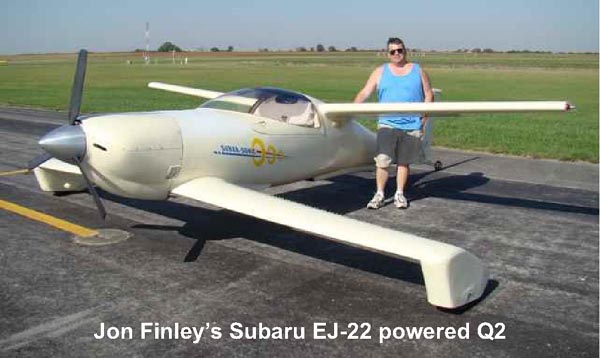 I now have over 100 hours with the Subaru EJ-22 Legacy direct-drive conversion on my Q2 (with about 600 hours total time). So, I felt that it was time to write up the information as I consider the conversion to be highly successful.

My engine is from a 1990 Subaru Legacy and is known as the EJ-22. This engine was produced from 1990 until about 2002. It is a 2.2 liter (135ci) four-cylinder, horizontally opposed, single-overhead cam, electronically fuel injected (EFI) aluminum engine. In the car, the 1990 model produces 135hp at 5400rpm. The only internal change to the engine was to an aftermarket camshaft grind from Delta Cams in Tacoma, WA - (referred to as their "220" grind) with the goal of lowering the rpm at which maximum torque is produced and increasing torque output. Obviously, running this engine direct-drive is not coming close to extracting its maximum output. The penalty of that is carrying around extra weight. Basically, I have an engine capable of producing 150 hp from which I am only getting a fraction of that number yet I'm still carrying around the weight. That was a known fact going into the conversion that I was willing to live with. The upside is an inexpensive engine.

The details of my conversion are documented on my web site; http://www.finleyweb.net , so I'll spare you details. In summary, I did the entire conversion myself which included construction of intake and exhaust manifolds, motor mount, crankshaft adapter, prop hub, cooling system, all of the little brackets, mounts, etc. The firewall forward weight of the complete engine is 250 lbs. I do not have an exact weight on the radiator, ducts, and plumbing, but would guess approx. it's 10 lbs. A total of six quarts of coolant is used which is another 12 lbs. Empty weight is 720 lbs. My previous engine was a direct-drive turbo-charged Subaru EA-81 (1.8 liter) that was documented here in Q-Talk. The reason for replacing that engine was due to the turbo-charger and not the engine. The more that I learned about operating the turbo-charger, the more I realized that I wanted an EFI system controlling it and the engine. To make that happen would have required a lot of rework. An option was to eliminate the turbo and install a PSRU (propeller speed reduction unit) to allow the engine to run at higher rpm/higher output. That too would have required a significant amount of rework and the purchase of a rather expensive PSRU. I finally concluded that installing a normally aspirated version of the EJ-22 would be no more work or cost and would eliminate the turbo. At the time, I was living at 900' MSL in Minnesota. Now that I am at 5,000' MSL in New Mexico, I sometimes wish I still had the turbo again. Ahh, such is life___

I initially used the stock automotive fuel injection system for about 20 hours, but was not thrilled with the inability to tune the system, so I switched to the Real World Solutions (RWS) EC-2 controller. This is a redundant fuel injection controller designed for operation in aircraft. It has proven to provide absolutely flawless performance, is incredibly flexible/tunable, and very easy to operate. Details can be found at: http://www.rotaryaviation.com. Since I already had an EFI system, installing this new controller was quite easy and only required changing the coils and some wiring. I cannot say enough positive things about RWS (Tracy & Laura Crook - the entrepreneur's of RWS) & the EC-2 product.

Proper liquid cooling system design for aircraft is now pretty well understood and no longer the art form that it was just a few years ago. However, implementing a good design in a Q2 is not the easiest task due to the layout of the airframe. I elected to install the radiator in the tail cone with a P-51 style air duct. Being a cheapskate, I used an inexpensive off the shelf automotive radiator (VW Rabbit) rather than a custom unit. This necessitated a more complex design than would have been required with a custom radiator. What I have works so I am content. I have never experienced any cooling problems on the ground or in-flight. On the ground I can run the airplane forever at any power setting without fear of overheating. My longest ground test was 25 minutes at full throttle during the engine testing phase. The only issues that I've had with the system have been the introduction of exhaust gasses into the cockpit and hot air leaking out of the duct and causing the cockpit to be quite warm. I have both issues sorted out now. 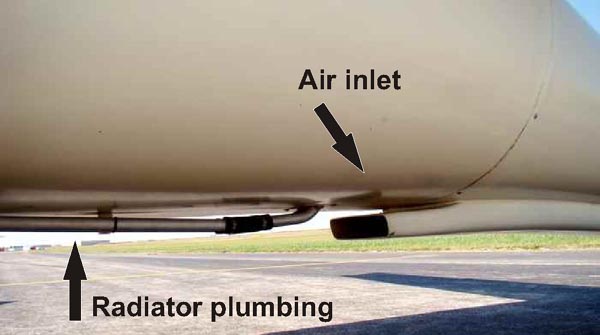 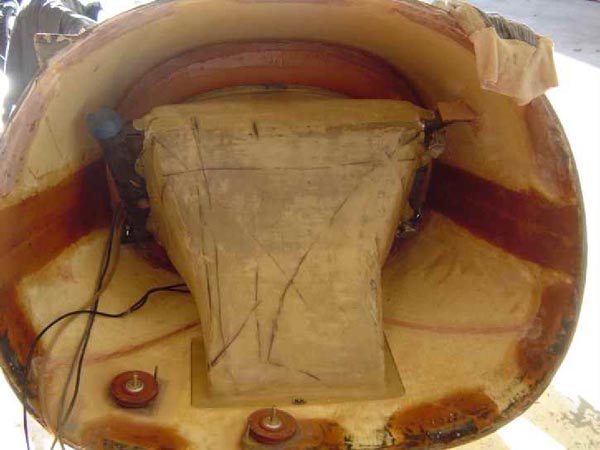 I am currently running a Warp Drive, 3-blade, ground adjustable propeller. The blades are the paddle design and have been re-profiled by Gary Hunter (crew chief for Pushy Galore) for high-rpm use. I get 3500rpm in climb, 3800-4100 cruise, and have seen as much as 4400 rpm when REALLY pushing hard. The faster you run the engine, the smoother it is. After a fair amount of prop design research, I am convinced that this blade design is not ideal for high-speed efficiency and I am working on a couple of ideas for a more efficient solution. Until then, the Warp Drive works just fine. Running at the high-rpm (relative to typical aircraft engines) does take some getting used to. Initially, the "old" pilot in me really didn't want to run the engine over about 3500 but time has solved that problem.

So, why choose a liquid cooled engine, or more specifically, why did I choose the Subaru? Cost was a huge factor, but I generally would not suggest that anyone consider an auto engine conversion to save money. The cost/benefit of mass produced engines/parts is obvious when you compare the new or used cost of any component. My experience and research has shown that there is very little to be excited about with old air-cooled, carbureted aircraft engines. The only real advantage that they offer is that they are a known quantity and, for the most part, offer bolt on installation. They do not provide the power to weight, efficiency, or reliability that a modern liquid cooled engine offers. There is generally much discussion in pilot circles about auto engines not being designed to run at high continuous power settings. Of course, a very small amount of research will reveal that this is an old wives tale. Modern automotive engines are tested to much higher standards and vastly greater extents than any general aviation engine ever has been. What about the high-rpm at which I run my engine? Again, a bit of research and you will find that one of the keys to most engine longevity calculations is piston speed. Many may find it interesting to learn that an 0-360 being run at 2750 rpm has a higher piston speed than my EJ-22 at 4000 rpm (33.4 fps versus 32.8 fps - due to the longer stroke of the 0-360). Another interesting tidbit that most folks have not considered is the raw temperature numbers. An air-cooled engine runs at approximately 375 degrees, a liquid cooled engine at approximately 210 degrees. Take a moment and consider that difference. Finally, you couldn't touch a run-out old piece of junk aircraft engine for what I have invested in my Subaru. So, in my opinion, it's a hands-down winner for those willing to do some work. I have a couple of links on my website to some excellent articles that address this in much more detail (links are on the "Automotive Engine Conversions" page). In my opinion, this great debate is the same one that has been going on for years and is entirely related to lack of knowledge and resistance to change. Years ago, folks said they would never own an automobile; they now have three in their garage. Then it was the TV, then computers, and so on.

How much different is it to operate? Quite a bit as it is basically a single lever operation (throttle). The EFI system automatically controls mixture based on your settings, which are based on inlet air temperature, rpm, and manifold pressure. The EFI controller also controls timing. There is no carb heat or cowl flap. Pretty simple - push to go, pull to slow. It has been a lot of years (plus the change in elevation) since flying with the lighter Revmaster so comparison is difficult. In my opinion, my Q2 was underpowered with the Revmaster and the engine was almost always working hard to provide marginal performance. With the current engine, the performance is quite satisfactory and I rarely find myself wishing that I had more power. That said; I'm not sure that you can have too much power. Said differently, I find that for the first time since flying the plane that I am pretty content with the power plant and am ready to turn my attention to drag and weight reduction.

Due to the problems with Ethanol and the difficulty in finding fuel that has not been contaminated with this stuff, I have switched to using 100LL exclusively. I'm sure everyone already knows how bad 100LL gums things up and makes a mess out of the engine internals but so far, that is better than what the Ethanol does to my fuel tanks.

So, what's next?? I'll be the first to admit, I have a very aerodynamically dirty Q2 and have lots of cleanup planned. Actually, I've had it planned for years. The problem is actually getting to any of it. I have found this to be a real significant problem over the course of the last year as I am doing so much flying that I hate to take the airplane down for performance optimization. I fly to a neighboring airport for breakfast most every Friday, Saturday, and Sunday morning, a quick flight before breakfast a couple times a week, and an occasional escape during the lunch hour just to get away from work for a bit. So, 2-3 weeks of down time would be a real bummer. I still have a bulbous, heavy cowling and need to build a new one; wheel pants are the big draggy originals, and so on. I bet most everyone has a similar list! I'd like to think I could gain at least 10 mph with some of these aerodynamic improvements and possibly drop 10 lbs with some relatively simple and inexpensive changes. Those items will likely be next on my to do list. Who knows, maybe I'll get lucky and trim 100 lbs and find another 100 mph! :)

Good Luck with that Jon! More photos of the Fly-ins and Jon's Subaru installation are in the Members Only section of the QBA web site.