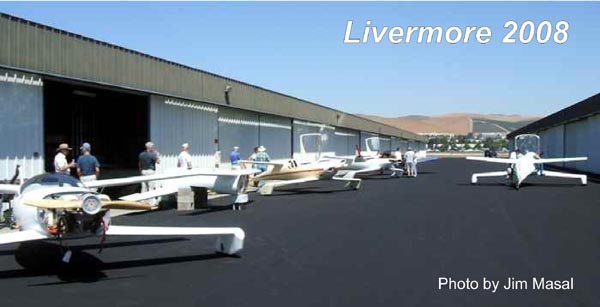 We gave you a brief report in last issue and promised this full report.

On Saturday, August 23, temperatures were in the low 80's, with light winds, making for perfect conditions to host a memorable fly-in. The 7th Livermore Tandem Wing Fly-in, hosted by Alan Thayer and Sam Kittle, proved that there is still interest in the tandem wing design, and builders and pilots of both Quickies and Dragonflies spent a day sharing encouragement and knowledge. For the many interested builders who attended, seeing successful flying airplanes up close is about as real as real can get... until they get their first ride; at that point, the smile on their face upon their return shows just how charged up they can be to finish their plane and join the ranks of those already flying.

That's why these fly-ins are a tremendous source of encouragement and a shot-in-the-arm to continue with the building process. These fly-ins enable many to ask questions and get answers from those who are flying, and share ideas on improving performance, or correcting handling problems, even learning about taking these planes up for the 1st time.

By the time the sun began to set on Saturday evening, 15 planes had made it to Alan's newly inhabited hangar, #262, for the event. The aircraft present were Alan Thayer's Q-1 with the new carbon fiber spar canard, and his Jabiru-powered Q-2, getting closer to flight; 4 Q-200's built by Bob Farnam, Jim Patillo, Mark Summers, along with Brad Olsen in his newly-paneled plane, originally built by Tom Moore; Lynn French's Tri-Q-200 flown in from Broken Bow, NE; Larry Severson's Q-2 from Fountain Valley, CA; and Brad Hale and Tim Iverson's Dragonflies, flown in from Southern California as well. Also present were the ever-faithful Johnson brothers, Charlie and Bob, who flew in from Ogden, UT in their Cessna 172; Jack and Diane Huston from Camp Verde, AZ in Diane's screaming 152; Phil Lankford and a builder friend showing up in a beautiful Cozy, and our own Dave Dent, with his Velocity. Also in attendance was Kitplane's writer Rick Lindstrom arriving in his Corvair-powered CH 601. This turnout of planes was a record for the Livermore event.

Sam and Alan wanted to keep our fly-in informal, to allow for a maximum of personal time spent with builder/pilots, but we did schedule three events which we thought would be helpful to all attending. Barry Weber, who is one of our EAA Chapter Flight Advisors, presented a very helpful review of items to think about prior to one's first flight. Some builders will be in that situation soon, and the points that Barry presented were important, and certainly applied as well to those of us who have been flying for quite some time. Barry's presentation covered everything from pre-flight objectives, the use of a chase plane for making airborne observations, proper communications and the gradual opening of the flight envelope. Safety is the number one factor in all that a builder/pilot strives for, and Barry's presentation rightly emphasized that aspect from every angle.

Barry's talk was followed by a short presentation by Rick Lindstrom, who as previously noted, flew in to Livermore in his beautiful red CH 601, powered by a Corvair engine. Pat Panzera and William Wynn had been championing the Corvair conversion for aircraft use, and a good number of builders are now going Corvair, and are passing on the baton. Rick's installation is just beautiful: neat, everything in its right place, and serviceable. I was able to hear him start up the engine upon his departure, and it sounded smooth and powerful as he taxi'ed out. I will be interested in keeping in touch with him to see how the installation continues to perform over time. Acquisition costs and availability of parts are certainly pluses when considering the Corvair as an aircraft powerplant. 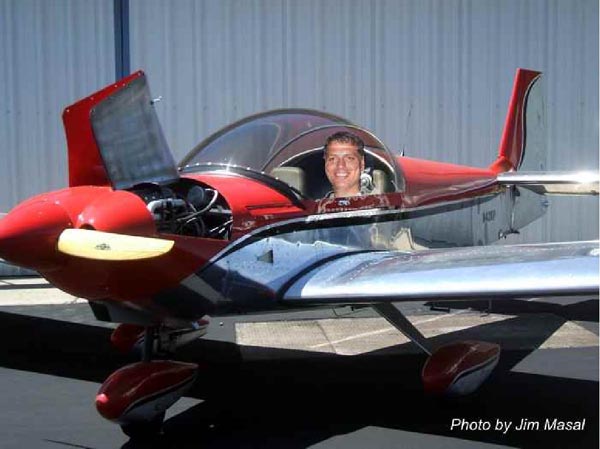 After Rick's presentation, came the moment that many had been waiting for. There had been some, shall we say, "spirited" dialog on the Q-List recently pertaining to the viability of the upper wing on Q-2's and Q-200's, in light of some damage that was noted on one particular rear wing after an accident. As a result, some builders expressed some real reservations about the integrity of the rear wing, especially as hard data regarding its testing was not immediately available. Sam Kittle suggested that we do a test on a Q wing during the Livermore fly-in, when builder/pilots would be present, and when we could all participate in the test and see for ourselves what we might be able to learn. Sam had just learned of the availability of a rear wing/fuselage/canard combination that Dave Chalmers in Washington was willing to give to the cause. Dave had built and flown a very successful airplane, which we knew was built strictly per plans, consequently making it a great test-bed. With the wing still attached to the main airframe, the test results would have more credibility with the wing behaving as it would in real flight, and not being tested separately.

Sam made a 1,600 mile trip to the state of Washington and back to pick up the airframe. Our initial thinking was to conduct a destructive test just to see how many g's an Eppler rear wing would take when properly built. However, in the light of conversations with engineers, and the lack of sufficient test equipment to accurately measure the weight applied and keep that weight from falling off, we concluded that we could still prove the safety of the wing by testing it to its design limits, of 4.4g's. Bob Farnam had also pointed out the inherent dangers in conducting a destructive test; one of his fears was that as the wing failed, it could potentially cause serious injury to personnel from flying debris. We finally agreed that a test limit of 4.4 g's would reliably demonstrate the airworthiness of the wing.

Bruce Cruikshank, a Livermore EAA Chapter member and builder of 2 RV's on the field, and a designer of sailplanes, supplied us with the model for the load distribution on the wing. The wing needed to be inverted and supported stoutly to take all the weight applied, while leaving the wingtips free to flex. Bruce's calculations indicated we would need just over 2,000 pounds of weight to achieve a load simulation of 4.4 g's. Now, where on earth do we get that kind of weight? The idea came up to use 60 pound bags of sand, which was available at Home Depot. Sand appeared to be alot more malleable than cement bags, and would conform to the surface shape of the wing.

But, what do we do with 34 bags of sand after we buy them??? This is where we need to make a shameless plug for Home Depot. I had gone to check out the availability of sand a week before the Fly-in, and told the store manager what we were doing. After a few amused looks on the manager's face, we were told that as long as the bags weren't damaged, we could return them. And sure enough, after the test, we loaded every one of the 34 sandbags we had bought earlier that day back on the truck and took them back to Home Depot. Bravo, Home Depot!

We conducted the test to three different levels, the first one simulating 2.29 g's, then 3.3 g's, and finally, 4.4 g's. To verify the integrity of the internal structure of the wing, we also measured wing tip position before and after each test level to ascertain that no deformation had taken place, further verifying that the wing was handling the loads as designed, without damage. We placed jacks under each wingtip, and loaded up the wing with the proper amount of weight for each test level, then instructed both guys manning the jacks to slowly release each jack, until wing flexing had stopped. We then measured the final resting place of each wingtip with our benchmark yardstick. Since real life load applications on a wing in actual flight are only momentary, the jacks were then raised back to their original position. This simulated the load being removed when the airplane returns to straight and level flight. These wings were not designed to withstand full loads for an extended period of time. We then quickly removed the sandbags, removed the jacks, and measured once again to determine if each wing tip returned to its initial starting location. 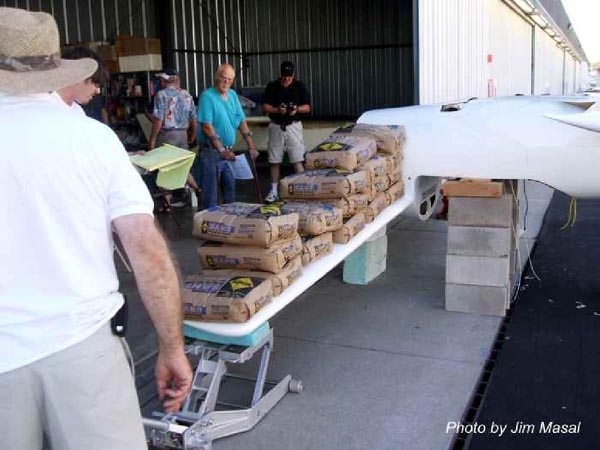 For the first test level, simulating 2.29 g's, we applied 910 pounds across the span, or 455 pounds on each wing, concentrating the weight towards BL10, and spacing it out towards the wingtips. This test saw a wing flex at the tips of just over 3 inches. Level two, or the simulation of 3.3 g's, called for loading the wings up to 1,500 pounds of sand across the entire span, or 750 pounds on each wing. When released, the wingtips sagged over 7 inches. For the final test, simulating 4.4 g's we loaded up the span to 2,000 pounds, or 1,000 pounds on each wing, with bags piled up 4 high at the root, then 3 high, for several stacks.

When order came to start releasing the jacks, and down each wing went, further and further and further. You could have heard a pin drop as we all waited in for something to happen. Finally, the wings stopped flexing, for a total of 10.5 inches of total flex!! We were all in awe at the amount of weight the wing was supporting. The only sound that we heard was a crack on the front of the fuselage because it wasn't supported as well as we had hoped. We then reapplied the jacks, returned the wing tips to their original position and then removed all the weight. Low and behold, those wingtips returned exactly to their original position. We looked for any sign of failure or damage and found nothing. Everyone was impressed! It appears, when properly built, these wings do exactly what they are designed to do.

However, some of us continued to wonder just how many g's this airfoil can ultimately take. Builder Mike Perry has some connections with Cal Poly & he will be looking into the possibility of finding an engineering class to test the wing under safe, laboratory conditions to destruction. 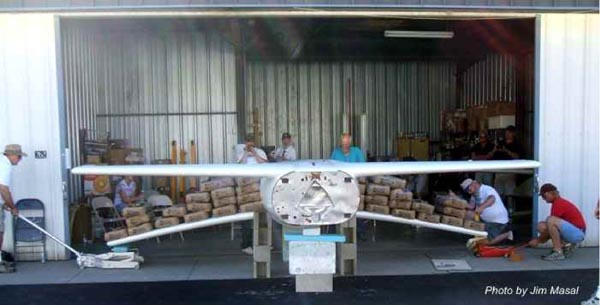 Our deepest of thanks go to Dave Chalmers who donated his airframe for this test, and to Home Depot for supplying the sand bags.

To cap our day off, we delighted in Sam Kittle's wonderful barbecue chicken and homemade potato salad. Other dinner contributions came from Jennifer Patillo and others. We continued the hangar flying, sharing of stories and information until 9:30 PM, when we finally closed up the hangar.

It was indeed a successful fly-in. Thanks to all those who attended. We'll see you again next year!