I completed my first flight in my Q2 yesterday from RNAS Yeovilton in England. I racked up 50 minutes yesterday and a further hour today. The conditions were ideal yesterday for a first flight. It handles really well and is very stable and I am very pleased with the handling.

Take off and landing were pretty straight forward and it seemed fairly easy to keep straight. Today it was a bit more windy with the wind at about 30 degrees off the runway from the right at about 10-15KT, but the aircraft seemed to handle it well on both take off and landing.

I am a bit disappointed in the speed I am getting out of it. I only seem to be getting about 125mph at 3000 rpm in level flight. I think my airspeed indicator is under reading a little, but not more than 10mph. This would still seem slow compared to what other people get out of their Q2's. I have a RevMaster 2100 with 75hp heads a RevFlow carb and a Prince P-Tip 54"x49" prop. I will take a GPS tomorrow so I can work out what my ASI is telling me.

I'm coming in a little fast still and using a huge amount of runway to get stopped. Currently about 3000 feet. I have only 5 landings so far and the last one was about 2000 feet roll out, so I am working on reducing the landing roll. I'm lucky I have a 7500 ft. x 150 ft. runway to play with.

Overall I am pleased to be flying it after four years of blood, sweat and tears during the restoration. It was definitely worth it. I currently have a total of 5 hours test flying to do before the Popular Flying Association will issue me with a Permit to Fly. I have 3 hours 10 minutes left to do which I hope to complete by the weekend.

Anyway, hopefully the weather will be good tomorrow and I will rack up another hour or two. For all you guys still building, keep at it. It is definitely worth the slog. I certainly have a big smile on my face today! :-)

Simon sent these photos and description shortly after his first flight. 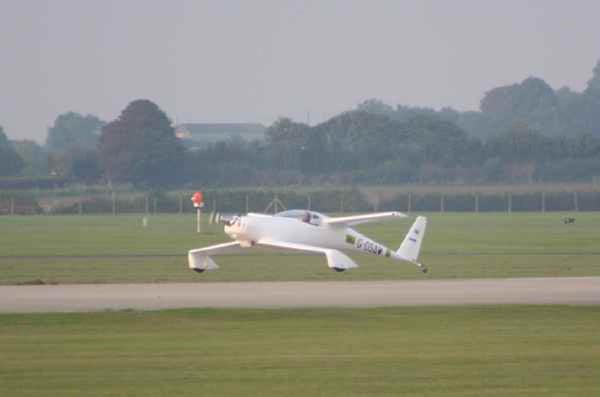 As requested, here are a couple of photos of my Q2, G-OSAW, s/n 2443 on the day of my first flight on Thursday 13 September 2007 at RNAS Yeovilton, Somerset, England. The aircraft was originally built by Norman Evans an Englishman living in Albuquerque NM in 1983 and registered N3797S. He imported it to the UK in 1995 and reregistered it G-BVYT, he then sold it to a group who operated it for a couple of years and they sold it to a woman who was a business jet pilot. She encountered an engine problem with it and didn't fly it much. She also owned a number of other aircraft and it became a lower priority. The aircraft had last flown in August 2000 when I bought it in July 2003. I bought it with an older serial numbered engine than the one it had been built with, but the engine I got was effectively brand new and had been sold with a kit that never got built. I converted it to a 75hp version with new heads, camshaft and revflow carb. Shortly afterwards I reregistered it G-OSAW. I have since spent the last four years restoring the aircraft back to flying condition. It would have been quicker but I am a Royal Navy pilot by day and have spent a lot of time on deployments in the last few years. The aircraft did briefly fly a couple of times in Feb and Mar 2005 at the hands of a test pilot but it suffered cooling problems which have now been rectified. The paint scheme isn't finished yet and I will send more photos it when it is finished. 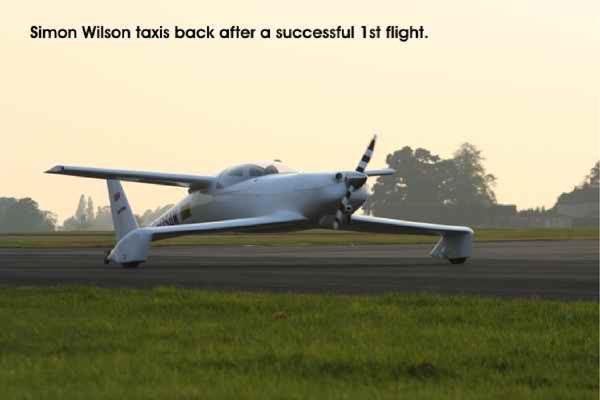 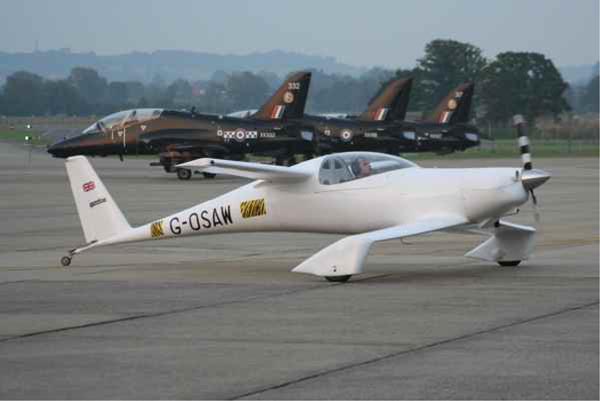 You can order a printed copy of Q-talk #125 by using the Q-talk Back Issue Order Page.