We had 52 planes in the AirVenture Cup race and five in the Sprint class (displacement of O-240 cu. in. or less). Two planes were Vari-Ezes that pretty well trounced me last year. There were also two planes I beat last year; a rotary powered Velocity 173RG (74 cu. in. displacement) and a Lancair 235.

Up to the point of engine start, this year's race was routine, if you can ever call a race "routine". I watched the unlimited guys take off before I started up. That Nemesis NXT is really an awesome machine. I got in the big long line for departure then taxied down toward the starting line, right behind Gil Hutchison in his fast Vari-Eze. When I got to the departure staging I did a very quick runup and found a very rough left mag.

Actually, the left "mag" is my LSE electronic ignition.

It was extremely rough, complete with backfires. So I ran it up a little higher hoping it would be a fouled plug that I could clear. At something like 1,800 RPM it was still backfiring, so I indicated to the guy controlling the runway thumbs-down, that I would not be going anywhere right now. He cleared me out to the runway, and when Gil took off, I just taxied the full length behind him. I went back to the hangar and shut it down. In my haste, I forgot to try and diagnose the problem by looking at my exhaust temp and cylinder head temp gauges. At this point I didn't know if it was the ignition system, a bad plug, bad wire, or what.

I immediately pulled the cowling and the lower plugs and one of them looked pretty dirty. I was going to try to clean them, but the mechanic in the shop wasn't able to help me and it wasn't my shop, so I couldn't help myself. So someone volunteered and we ran down to the Pepboys automotive store to find replacement plugs. True to life in retail stores, there wasn't anyone behind the counter. (C'mon, I'm supposed to be in an air race RIGHT NOW!) Finally, a guy ambled over. He couldn't find exact replacement plugs, so I took whatever he had that would fit.

We went back to the hangar and I put the plugs in. I was just about to get in the plane when Eric Whyte announced that the first planes had already arrived at the finish line south of Fond Du Lac.

I fired it up. Ran fine. No problem. Taxied out. By this time, all the race planes were long gone. Instead of being behind race planes waiting for takeoff, I was behind a Mooney and a Piper Cherokee. It kind of changed the tenor of the whole thing.

I finally got in the air and everything was fine. I tuned the discrete race frequency and, of course, nobody was on because anybody still in the air was hundreds of miles away.

The engine was smooth and my speeds were good. Most times I was seeing 185 knots for ground speed and at one point I was showing 192 knots. Most of the time I flew about 1,000 feet AGL. 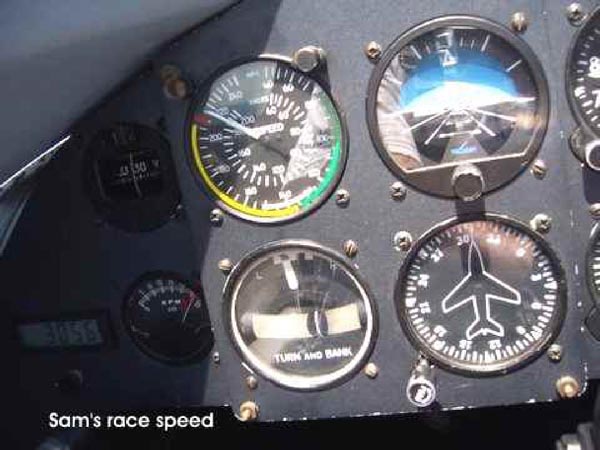 As I approached the first checkpoint ,the Kankakee airport, I was starting to lose some RPMs and gain some roughness. I had been running at 3,050 but it was dropping to 2,850 or so. In addition, there was some vibration and my oil temperature was going way up. I didn't have any idea what was happening, but noticed that if I throttled back a half inch or so it would run a little better.

I made the designated low pass Kankakee but then I pulled up and circled once to try and determine if it was safe to continue.

I called the race crew on the ground at Kankakee, and told them I was circling once and may have trouble. They acknowledged the call but then I told them I would continue.

As I headed out, I was doing some experimenting and checking the EGT/CHT. In addition to my oil temperatures going up, the CHT on cylinder number three was over 500 degrees! Again, I found by throttling back a little bit, I could bring it down to the normal range around 325 degrees.

Somewhere along the line I figured out what was happening. The new plugs that I bought were too hot, they were the wrong heat range, and I was getting pre-ignition in cylinder number three. Pre-ignition occurs when there are parts glowing red hot in the combustion chamber and the cylinder acts like a diesel engine. Not good.

But, throttling back brought all the temps in line so I flew the rest of the race.

My final average speed was timed at 205.25 mph, my personal best, which was only 0.13 mph faster than the guy that took fourth place! I only beat him by 5 seconds! (If I factor in a two minute loss for the circling and throttle back for half the race, I'm pretty sure I could have registered around 208.)

As I expected, I was soundly tromped by the two modified Vari-Ezes. Second place went to Gil Hutchison at 231.07 and Klaus Savier took first, at a screaming 254.89 mph! By the way, the fastest Unlimited class aircraft, the Nemesis NXT completed the course in 1:15:07 at 337.26 mph!

When I finally got to Oshkosh I installed the correct plugs and Terry Crouch did a borescope inspection of the pistons. The race is fun, but it does test and stress everything you and your plane have done. Whew!

Looks like I have some more speed work to do. See you there, next year!

One can only wonder what Sam's speed would have been if he didn't have these issues to deal with!