Q-talk 122 - Another Note From North Of the Border

Q-talk 122 - Another Note From North Of the Border

Hello Doug! First of all thanks for the efforts you put in to Q talk. I am always looking forward to the next issue, especially since I started getting the PDF file. It sure beats the black and white issues by snail mail! The color pictures are great! And at less cost than the snail mail version!

She was trailered across Canada twice and got some minor scrapes. On one of the trips the canopy was ripped off its hinge and got a 6 inch hole in it. Since 1991 it had been hanging from the ceiling in an old hangar in Winnipeg. A friend informed me of the project and I couldn't resist. 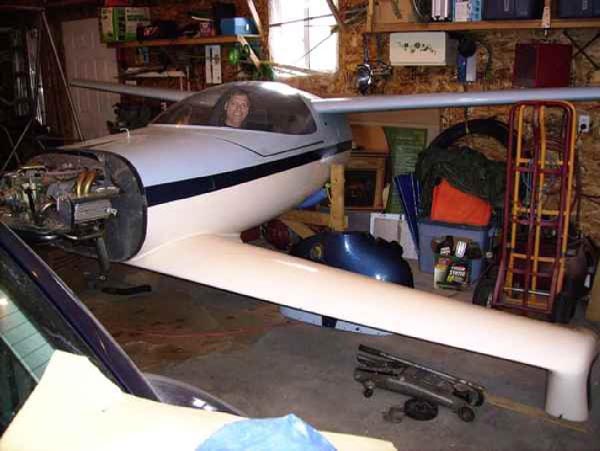 Nothing constructive had been done since 1982, but all materials were there, including a new Nav/com GA 1000, basic flight instruments, VW Revmaster engine, gauges, prop, spinner, etc. I am retired and am not the type to twiddle my thumbs. However, I am in no hurry to complete the project and enjoy the time I spend in my garage.

I was able to repair the canopy as the damage was along the edge of the right side. I modified it to hinge forward. I have a fair bit of knowhow and so far have been able to get by with only my wife's help to hold an odd wrench when my monkey arms are inadequate. She is also handy when I need help to be freed after getting stuck inside near the front bulkhead.

So far I have installed the elevators and ailerons, and have made a reflexor mechanism; installed brake calipers and a single master cylinder. I have conflicting feelings about the brake system, but I think I would prefer toe brakes and I will either buy or make a couple of master cylinders.

I did fit the engine and made the baffles and a heat muff box to at least direct some defrost air on the windshield.... just to stay VFR! The aluminum instrument panel took a lot of drilling and filing as I did not have hole cutters. But with elbow grease and patience the job also got done. I want to thank my tech and shop teachers for demanding high standards .....even for filing! 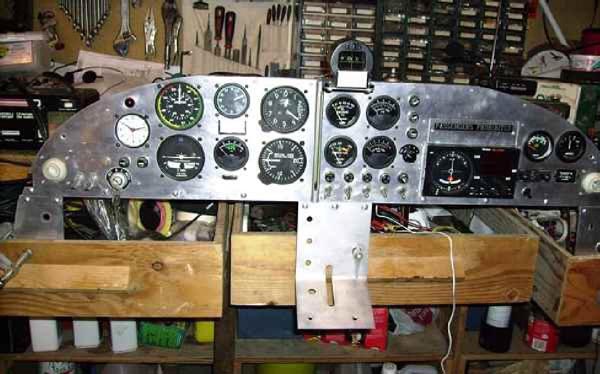 The electrical wiring is mostly complete. One of the few additional items I installed is an Aircraft Spruce intercom with aux input for music. When powered up, it sounds like a control tower in my shop as I receive most of the local traffic to and from Winnipeg International.

It took some careful cutting to make the belly board below the main fuel tank and to install the hinge, but with the aid of a Dremel tool it became rather easy.

Next job is to pull the engine and hook up the starter and magneto wiring. I will wait for milder weather as I have just enough room to park my VW Beetle diesel beside the plane. I better get back to finishing this project, eh! Till later. Clear skies and happy landings to all.

You can order a printed copy of Q-talk #122 by using the Q-talk Back Issue Order Page.