There are two things that other builders look at when they are silently judging your aircraft. One is the paint job and the other is how uniform the flying surfaces are. Even a good paint job isn't going to cover up a poorly prepared surface. Producing smooth, uniform surfaces on your wing and canard can be very time consuming and frustrating if you don't use some proven tools and techniques.

While upgrading the Tri-Q2 to a Tri-Q200, I decided it was a good time to do an extreme makeover. Those of you who have seen 222RR know it was well overdue. I'm even changing the N-number. The water based paint I originally used was horrible. So I decided to sand the entire plane down to naked fiber-glass and start over. I was dreading even the thought of it. I remember all too well the frustrating time I experienced 15 years ago, and here I go again, mix micro, spread micro, sand micro; mark low spots, mix micro, fill low spots, sand micro, make new low spots, etc. Fortunately, with the help of an outstanding article sent to me by Sam, plus some additional techniques that I will describe, the process is much, much easier this time. In fact it is going so well that I am inspired to help others sand their wing and canard - NOT!

Note: Sam is one of those people for whom one need not be identified by last name. He is famous in the Q-world and is know by his first name; like Elvis, Willie and Prince.

The article Sam Hoskins forwarded to me, Finishing a Composite Airplane, can be found at:

I didn't see an author's name. I'll refer to him as Mr. X. This article is superb and tells you exactly how to produce a smooth, uniform surface. But being a homebuilder, I am compelled to "improve" upon the perfect. By combining the techniques mentioned in the article with a few techniques that have been mentioned in newsletters or elsewhere, plus my own corrupted ideas, you can bring your wing and canard to primer in a weekend.

It is probably appropriate at this time to put in my disclaimer. "I am quite certain about those things I don't know. It's what I think I know that gets me into trouble." 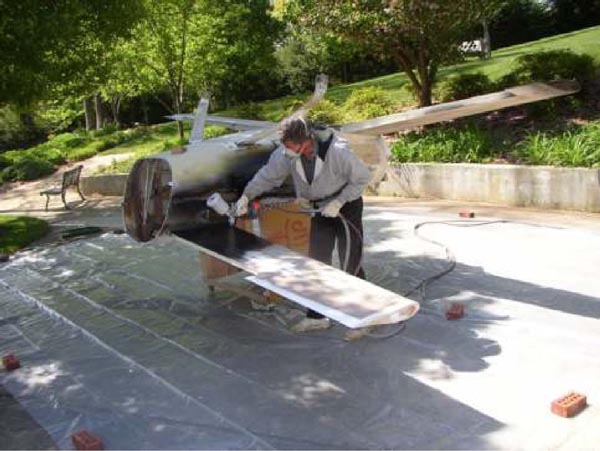 suggests that you first spray the surfaces you want to finish with black epoxy primer to help highlight the high spots while sanding. This is a must as far as I am concerned. It really made it easy to determine when I was approaching a high spot. While sanding, at some point you will see the black color beginning to show through. Continuing to sand will only create low spots that must be refilled. There will be more on this later. The primer goes on quickly and easily. It took Earnest (another person of renown who is known by his first name) about 1 hour from setup to cleanup to spray the topside of the airplane. The primer essentially dries on contact. Therefore, I began applying micro immediately.

1. Large mixing bowl - Big enough to get both hands into with a paint mixing stick

- In addition, of course, you will need microballoons and your choice of epoxy. 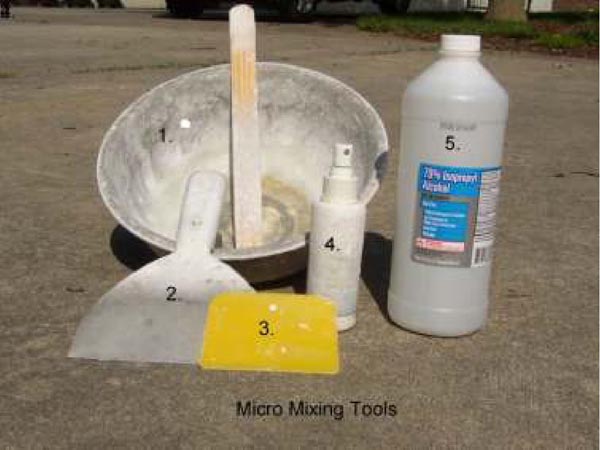 Mr. X also mentioned that he mixed about 2/3 to % of a gallon batch of micro. That was too much for me to handle. I was more comfortable mixing 30 grams of resin and 6 grams of hardener. For the major fills, I chose batch size 1. Batch size 1 is relatively small but mixed well in the bowl. The nice thing about these particular ratios is that it is easy to make smaller batches that have identical epoxy to microballoons ratios.

After thoroughly mixing the epoxy, I mix in balloons one cup at a time. The cup is a coffee measuring cup and holds 5 grams of balloons. The first two cups leave you with a really gooey mixture. The third cup results in a nice, dry mixture. It is so dry that I used my hands to mix the third cup of balloons and the micro didn't stick to my gloves. Again, the drier you can make the mixture, the easier it sands off. As Mr. X states, the micro will migrate to the surface of the airplane. This migration action is what causes the dry mixture to adhere to the surface.

The author also says to cover a complete surface, such as a wing, in one session, and put it on 1/8" to %" thick. Make sure you put it on thick enough to level all low places so you don't have to reapply micro. This is fundamental to making the process easy. Also the entire surface cures under the same environmental conditions. It takes approximately 18-20 batch 1's to cover one wing surface.

Step 3 - Apply micro. The big problem with dry micro is that it is extremely difficult to spread. It tends not to adhere to the surface and roll up. Therefore, out of frustration, we default to a wet mixture that is easier to spread. This is when Earnest Martin reminded me of a technique that really makes a world of difference. It seems that the application of rubbing alcohol to the mixture makes it spread more easily. This is my contribution - Instead of mixing the alcohol with the mixture, I used a mist spray bottle filled with alcohol and sprayed the putty knife blade as I was about to spread the micro. The alcohol lubricates the blade and it slides nicely over the micro, leaving a very smooth surface. The smoother you can apply the micro, the less sanding you will do later.

I evolved the application of micro into a two-step spreading process. Since I wanted a layer of micro about 1/8" or so to compensate for any irregularities in the wing surface, I place a blob of micro on the wing, mist spray the 6" putty knife with alcohol and spread a thicker than desired layer. The objective is simply to get some micro on the wing. Then I mist the surface of the layer I just spread and also mist the face of putty knife again. Then I use both hands and apply the necessary pressure to create a micro layer the desired thickness. This will usually make a nice long, smooth path of micro. I say usually because sometimes you have to do it a couple of times to get the uniform thickness you are striving for. A mist like a perfume bottle puts out is ideal. (I am sure the lady in your life will gleefully donate her Chanel No. 5 bottle to the project).

The immediate question comes to mind of whether or not alcohol adversely affects the mixture. I really don't know. My rationale is that the alcohol evaporates so fast that it doesn't have time to penetrate the mixture. Therefore, only the surface is "contaminated". Since I am going to sand 95% of the layer off anyway, the "contaminated" portion is long gone. Since it is too late for me, maybe someone among you can tell the others if this is an acceptable practice. If at 300 kts the paint peels off, I'll blame it on the alcohol.

I found that pushing the putty knife away from me created better results than pulling it towards me. Try each and see which works for you. And if you do a really good job of applying the micro, you will only have to do the sanding sequence ONCE! This is your incentive to do a good job of spreading.

A few days prior, before incorporating the use of alcohol, I covered the top of one canard. It took 4 hours. It was a frustrating 4 hours. The dry micro wouldn't spread evenly. It rolled up on the surface while sticking to the putty knife. When I began to micro the remaining three surfaces I tried using alcohol. The second surface covered was a wing and it took 2 hours and 45 minutes with a much smoother texture. The canard took only 1 hour and 45 minutes. That equates to about 9 hrs to micro all four surfaces. These times are for me working alone. About 90% of the time was spent mixing micro. So, if your Tom Sawyer skills are good and you can entice a couple of unsuspecting friends to mix micro for you, you should be able to do it in at least half the time.

That takes care of day one. Tomorrow will be even more rewarding.

To be continued in Issue 114