While working on our Quickies, from time to time we get lucky and discover something we weren't actually looking for. That happened to me recently and here is what I found.

Since the first two flights of my TriQ 2 last fall, I have been chasing down a problem with my RevFlow carburetor. I was attempting to follow the instructions from RevMaster and set the mixture needle inside the carb until I could see at least a 100 F peak in the EGT with the engine at full throttle. The procedure involves doing runups with the cowling removed. Running the engine at high rpms with no cowl spooked me at first but it was apparent that short runs and a keen eye on the CHT gauge could keep the temps within reason. The procedure I used was to start the engine, lean it and let it warm up at 1000 rpms until I saw at least 200 F on the CHT before I would run it up to full throttle. Once at full throttle and full rich mixture, I would slowly pull out the mixture while watching for a rise and then drop in the EGT's. The idea was to enrich or lean the needle inside the carb until I saw the best EGT peak. Sounds simple, right?

When I would run up the engine, however, it would get fairly rough and soon boom, boom, booms were coming out of the exhaust pipe. Every time I adjusted the needle, it would act a little different, but would still run generally rough at the top end.

I received some advice from Terry Crouch to pull all the plugs and clean them. One cylinder's plugs were pretty black with carbon deposits. After cleaning and reinstalling the plugs, it ran fairly well for a short while but it would soon return to the same behavior. I even swapped out the carburetor with another RevFlow that was known to be good and well adjusted. Things seemed good for a short time before the performance returned to the same bad state. You can imagine the frustration I felt with the RevFlow carburetors.

It was Terry Crouch to the Rescue! While lamenting to Terry about my carb problems, he said something that really surprised me. He said, "Keep your rpm's below 1200 to a minimum." Frankly, I had no idea what he was talking about, especially since I had always been instructed to idle at 1000 rpms. This also seemed contradictory to the experience I had while flying with Jerry Marstall. He would idle his engine for some time at 800-900 rpms.

With Terry's guidance, I did some additional research on the web and finally learned what he meant. Like many things, engines are a collection of compromises. The particular compromise Terry was referring to involved the spark plugs.

The temperature at the tip of the spark plug needs to be maintained above 850 F to allow the carbon and lead deposits on the electrode tip and insulator to be burned off. Below that temperature, the deposits can build up until they eventually lay down a path over the insulator to a ground point on the inner dimension (I.D.) of the threaded portion of the plug. When that happens, there is no spark across the gap and there is no combustion. I learned that spark plug and engine manufacturers play with different styles of plugs to get the optimal performance. They refer to a plug's design as being "Hot" or "Cold". The common misconception about hot or cold plugs is that the spark produced by the two types is different in some way. What they really are referring to has nothing to do with the spark at all. Instead, the hot or cold designations really relate to how quickly or slowly the heat is dissipated or retained around the tip of the spark plug in order to keep carbon fouling to a minimum. Here is the general rule of thumb. Low horse power/compression engines, like my VW, need to retain more of the heat generated in the combustion process to keep the tip warm enough to burn off deposits. These lower horse power/compression engines require plugs they call "hotter." High horse power/compression engines, like some of the really souped up engines, need to get rid of the heat faster. This prevents the metal in the spark plug from becoming so hot that it ignites the fuel before the spark comes along. When it does happen, it is called detonation. It is bad for the engine because things are happening out of sequence. Consequently, higher-powered engines that run at higher temperatures need "colder" plugs. 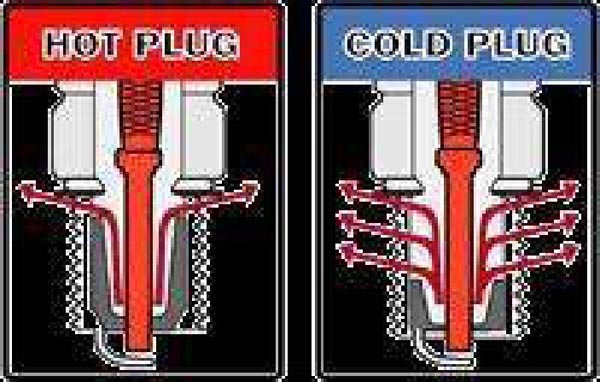 With this new knowledge, I had the idea that I needed hotter plugs to help burn off the carbon. Then I remembered something else Terry Crouch said. According to Terry, "Aviation plugs are chosen to perform best at cruise conditions, since that is where you spend most of your time when you run your engine." That made sense and I would have probably made things worse by second guessing the plug selected by RevMaster. I did not want to risk detonation.

Finally, his comment about keeping the rpm's below 1200 to a minimum was starting to sink in. By idling at a higher rpm setting than the 1000 rpms that I had been using, I would increase the internal temperature in the cylinder into the 850 F range. That may produce better results.

I went out to the hangar, pulled the top plug that I suspected would be fouled and cleaned it. I would have pulled the lower plug and cleaned it, too, but I only had a short time before rain was expected. I thought I could still test the theory with only one plug cleaned.

I started up the engine, pushed it to 1500 rpms and leaned it. I let it warm up until I saw 200 F in the CHT's and took it up to full throttle. Unlike my previous test runs, it actually ran smoothly and appeared to be producing full power. After running this way for a few minutes, I checked the left and right mags individually and I didn't hear any appreciable difference between the two. I was able to finally detect an EGT when I leaned the mixture, too!

I shut it down, rolled it back into the hangar and beat the rain. I worked on some other items and let the engine's heads cool down to room temperature. Then I pulled the top plug that I had previously cleaned. To my amazement, it looked just like it did after I cleaned it. I came back another day and pulled the lower plug on that problem cylinder and it was clean, too! That confirmed my L/R mag check when I was at the higher rpms. The combustion and heat generated by the one top plug actually cleaned the lower plug and let it fire normally. While I don't consider that a good way to clean the lower plugs, it is good to know that both plugs were clean and I was on the right track.

I pulled the borrowed RevFlow carb and replaced it with my original RevFlow and went though the same sort of test run with the same excellent results. This time I was finally able to change the settings of the mixture needle in the carb. I could actually see a difference in the EGT peak and could tell how it affected the running engine. The really neat thing was how the engine sounded like a sewing machine when it idled. I hadn't heard that for quite some time.

So, what did I learn:

You can order a printed copy of Q-talk #111 by using the Q-talk Back Issue Order Page.