In this final installation of the series on Weight and Balance we're going to cover the graphing of your data to make it easy to use and simple to understand. Most W&B charts found in the POH from your average spam can or even QAC's effort requires the pilot to do multiple steps and several additions to arrive at your final CG. Here is an example from the Q2 -GU canard manual.

With practice and experience. you can make this type of graph work for you. My biggest beef with this style is the difficulty in understanding the relationship between weight, when placed at the different stations, and the overall CG of the airplane. For example, you would expect that adding baggage in the aft compartment would move the CG back, but how much? How would burning fuel change the CG from the beginning to the end of the flight? What happens to the CG if you burn all the fuel in your main tank and some of the fuel in the header? When using standard CG charts, everything is disconnected. 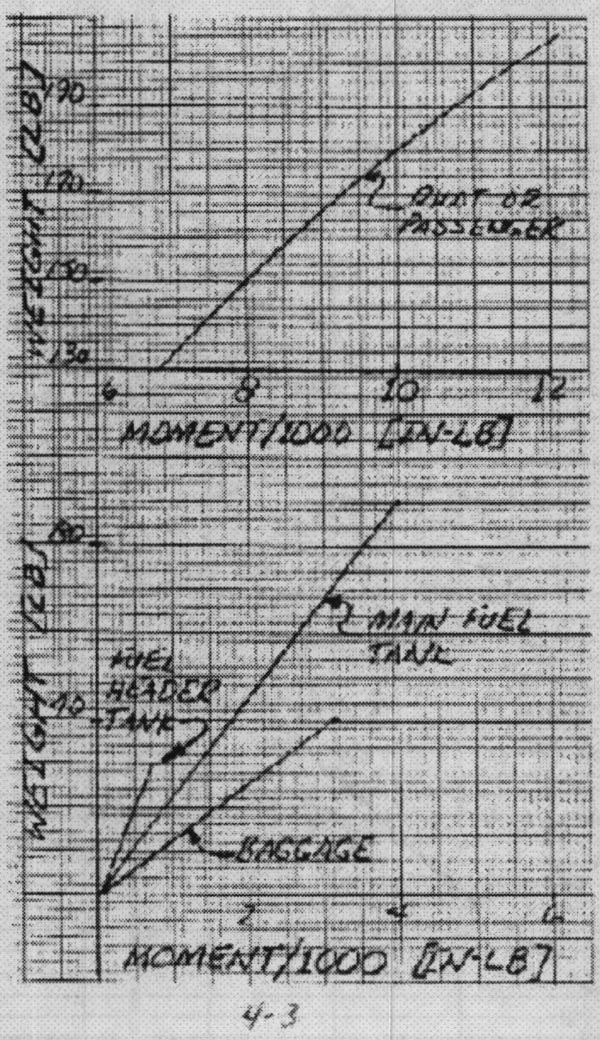 Enter Dr. Rutledge to the rescue! After purchasing A1 Kit-tleson's Q200, Dr. Geoffrey Rutledge used an elaborate mathematical software tool to graph the CG range of his newly purchased plane. On a single graph, he combined the data from all the disconnected CG charts in an incredibly simple way. He charted weight in total pounds on the vertical axis and the CG position in inches on the horizontal axis. He added to the empty weight and CG of the airplane, the combined weights of the pilot and passengers ranging from 140 to 560 total people pounds for the known pilot/passenger CG station. Then for every 20 pounds on the pilot/passenger weight line, he showed the impact of the contents of the main fuel tank. From there, he graphed additional lines to show changes of weight being caused by items being placed in the baggage area. Now to do his calculations, he can simply locate the total pilot/passenger weights on the dark line, run his finger up the vertical line representing who much fuel he plans to carry and then draw his finger back for the number of pounds being carried in the baggage compartment. The CG will be located where his finger stops. If he's between the forward and aft CG limits and below the maximum gross weight, he is good to go. For example, if he flies by himself and he weighs 200 pounds, the preliminary CG would be about 42.75 inches. If he plans to fill up his main tank, then the CG would go to about 42.85 inches. Finally, if he was going to carry 30 pounds of baggage in the aft compartment, he would follow the baggage line with each tick representing 10 pounds. The final CG would be at 43.80 inches and the total weight would be 1155 pounds. From this graph, burning all the fuel in the main tank will only result in the CG moving aft by approximately . 10 inches. You can also see how the items in the baggage compartment move the CG aft almost a whole inch with just 30 pounds. This is a simple method to visualize the relationship between weights and locations on the CG. 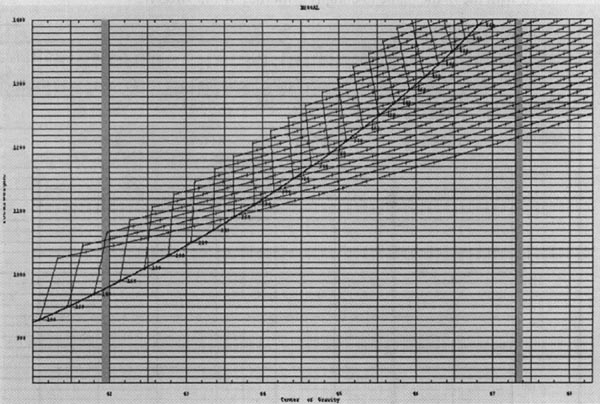 Since I really wanted to have a similar graph for my plane, I contacted Dr. Rutledge and he kindly shared the source code used to create the graph. After examining it, I found it used specific graphing functions found only in the high-end (McgabuckS) software tool called Mathematica. With that option blocked, I decided to try my hand at writing a program to plot a similar graph. While I am a computer programmer by trade, I have not done much in the way of graphing, so it was going to be a challenge. I had a few design goals in mind, though. I wanted to be able to enter specific data points like stations and weights into entry fields so I could easily reprint the graph later, if I would make changes. Since Dr. Rutledge's plane did not have a header tank, I wanted to include a graph line to account for the weight in the header tank. I also wanted to be able to print the graph, along with the data points, so I could carry it with me in the plane to comply with the "W" in AROW.

After some head scratching and research, I was able to produce the following graph.

The CG information is entered and presented in simple terms, such as pounds and inches. That is a real plus. You do not have to deal with moment arms or crazy terms like inch-pounds. Can't you just hear Andy Rooney say, "Just what is an inch-pound anyway?" It does not have to be that complicated. I really found this program to be helpful. 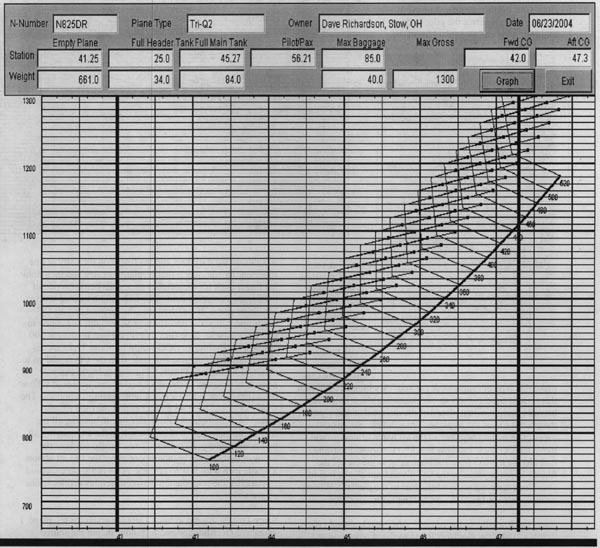