There are a number of first flights to report in this issue:

Larry Covey of Port Saint Lucie, Florida first flew his Tri-Q200 right after Sun 'n Fun on May 9th. I understand six landings were completed on that first day. Larry was impressed by how quickly things happen during the landing sequence. Since the first flight, Larry has been chasing down high CHT's. Congratulations Lariy and good luck on locating your cooling problem. ( Ed Note: One thought, have you calibrated your CHT probes and gauge?)

Well, it has only taken Mark Summers 23 years but his beautiful, injected Q200 flew from Livermore today (July 11, 2004) for the first time without a hitch! It's a GU canard, too! What a deal.

Barry Weber and I flew chase as I took him through the flight cards. Welcome to an elite group, Mark. You've paid your dues and deserve entry. In fact, Mark may now hold the record for total hours spent building his plane. Some of you may know that he actually finished it several years ago but was unsatisfied with the Revmaster after high-speed taxi testing. He parked it until we talked him into putting on the 0200 in 2000. He completely reworked the electrics, with a new panel to boot. We now have 5 flying Q200's on the field. 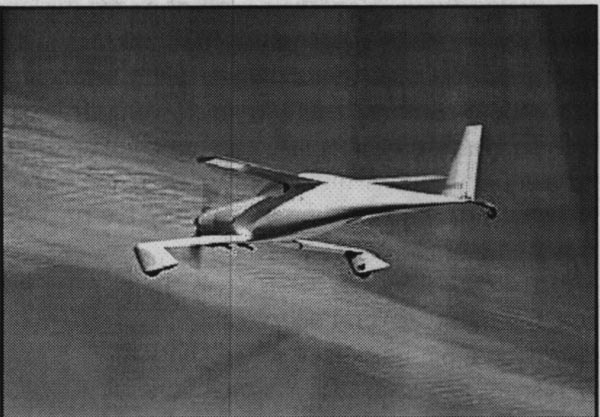 On August 7 , Dave Richardson, (Yes, your intrepid editor) flew his Tri-Q2 for 1.1 hours after ten years of building. In the past, Sam Hoskins has always advised "keep your head out of the cockpit" on your first take off. I've come to understand why he says that. As I was rolling down the runway, I glanced down at my airspeed indicator. It seemed I was going as fast as my prior training takeoffs but I wasn't in the air yet. I believe I saw 80 to 85 mph on the scale. When I looked up, the world was at a tilt! I had taken off in that brief second and was very left wing low. It happened so quickly. I pulsed right aileron and it rolled left again. I held the right aileron in to stabilize the takeoff and let it climb. I wanted to prevent possible pilot induced oscillations (PIO).

I started turning crosswind at about 400 feet AGL, leveled off at 1000 feet AGL on the downwind and paused there to check engine temps. The gauges were in the green and that puppy wanted to fly! It was solid as a rock! I circled above the airport during the entire flight, just in case I lost the engine. I communicated with the ground crew of CFI's, pilots and my EAA Flight Advisor. I leveled off at 2000 feet AGL. When I tried to reduce the throttle setting, I noticed the engine caused some pulsing vibrations. I pushed it back in quickly to clear it. It took several laps before I worked out the amount of mixture needed to allow the tlirottle to act properly. It required some work but it was manageable.

I began to work down my test cards, first checking small control inputs while flying level. The rudder was the only oddball response given but I'm sure holding so much right aileron to keep it level messed with the yaw control. I then moved on to attempting to hold an altitude when reducing the power and adding power again. This was to see what forces were needed on the stick and rudder. Since everything seemed reasonable, I proceeded to climb to 3000 feet AGL.

The next test card required pulling the throttle and maintaining a specific airspeed. I started at 95 mph. From there, I worked my way down 5 mph at a time until I got to 75 mph. I raised the nose just enough to see about 72 mph, without any signs of a pitch-buck. I surmised my stall speed was close to 67 mph and I would be able to use 85 mph for my approach speed for landing. I then flew back up to 3000 foot AGL and worked out the throttle setting needed to hold 85 mph airspeed with a 500 foot per minute descent rate. After several tries, I found it was 1800 rpm, which was the number used during my training. It was reassuring to discover that the approximate stall speed and the rpm settings were where I expected them to be.

After simulating a couple go-arounds, I heard my transfer pump clacking. I knew I was down to my header tank in fuel. It was funny, as I was coming down to get into pattern altitude, three other planes appeared and beat me to the downwind leg. I began to wonder if they were monitoring the radio calls with the ground crew and knew I was coming in. Maybe they wanted to land before the airport runway was closed! I had to make a longer downwind leg than I liked to let the last guy turn final and land. I tried to maintain altitude out there to have some options, if I lost the engine.

On my long final, I could see I was too high relative to the VASI lights so I dropped the nose some to lose some altitude quickly. I noticed I also picked up about 15 mph pretty fast in the process. Just as I was considering to do a go around. I saw the top VASI light turned pink. I knew I was back on track at that point. I slowly pulled the nose up to get the 85 mph approach speed and made sure the throttle was at 1800 rpms to give me the 500 fpm descent. From there, I followed the glide slope down. I flared a couple feet higher than I really wanted but I was parallel to the runway.

After a second or two, I realized I was floating. My training kicked in, identifying the reason was the 1800 rpm's. I slowly pulled the throttle and slowly feed in right rudder to keep the nose down the runway. A few short seconds later, I heard the familiar bump-bump sound of the mains and the nose gear connecting with the runway. I was rolling out straight as an arrow. I ended up rolling to the far end of the runway to allow one of those other three planes ahead of me to back taxi on the runway. While waiting a few minutes for everything to clear, I had a chance to collect myself a little before seeing the ground crew. 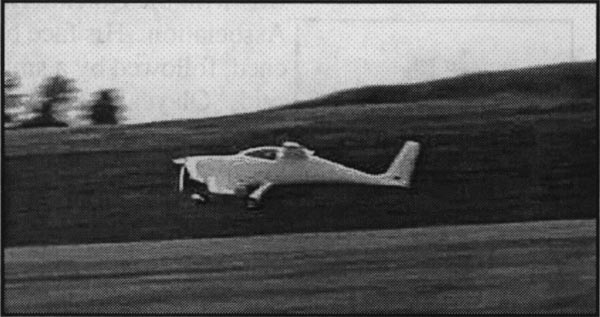 I truly believe training in another Tri-Q2 had a big impact upon making this a successful flight. Just having that experience to draw upon, knowing what to look for and what to do when faced with the unexpected really made the difference for me. I want to publicly thank Mike Conlin, Bob Malechek, Earnest Martin, Sam Hoskins, Bruce Crain and especially, Jerry Marstall for letting me fly with them over the years and preparing me for the big day! I will always be grateful.