Just thought I would let everyone know that my Tri-Q has officially become an airplane. My engine is a 2.6L VW type IV, 78mm stroke with the new SCAT billet crankshaft. The test flight was conducted 4/27/04 from Taylorville airport (TAZ) in calm conditions. Taylorville is about 20mi SE of Springfield, IL. The takeoff went fairly smooth with a noticeably heavy left wing, imagine that! I climbed to 1000 ft and started a climbing left circle around the field. After reaching 2000 ft., I pulled the power back to keep the temps in the green. Various control inputs were tried and all seemed well. 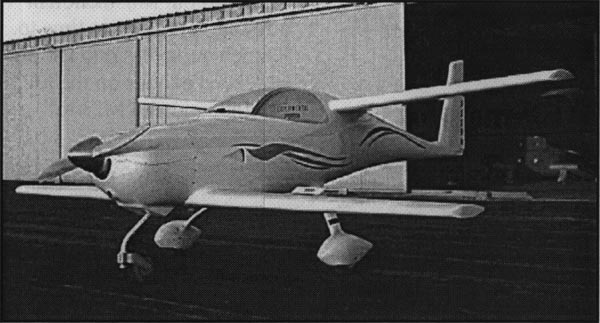 This aircraft is much more stable than the KR2 that I used to fly. After flying for about an hour, I decided it was time to land. Down wind was flown at 120mph and then to 100 mph on a long shallow final. Over the numbers, I cut the throttle, set up a slight nose high attitude and dropped it in from two feet. Rollout was very manageable and with a little braking, I was able to make the first taxi way, about 1200ft. The nose gear worked fine. The only shake and shimmy I have ever felt throughout the testing period was during very hard braking (stand on the pedals type braking) and this didn't seem like a big deal. So far the engine seems to be running strong with no apparent problems. I think with a little tweaking, this engine and airframe will make a nice combination. This airplane is a blast to fly!!! After I make a few more flights, I will report some numbers.

You can order a printed copy of Q-talk #104 by using the Q-talk Back Issue Order Page.