Just what is an ammeter and what does it do for me in my plane? An ammeter is designed to measure the flow rate of electrons between a source of power, like a battery or an alternator and things that consume power, like radios and lights. An example of what an ammeter measures would be the amount of energy used by two different 12 volt lights; a landing light and an instrument panel light. It is easy see that the landing light would require more electrons to do its job than the instrument light, even though they are both 12 volt lights. The term for what we are talking about here is amperes. An ampere, or amp for short, is the measure of the number of electrons flowing past a given point in an electrical conductor in a given amount of time. One volt through a conductor with one ohm of resistance equals one ampere. Batteries are rated in amp-hours (Ah). For example, a rating of 17 Ah means the battery should provide one amp for 17 hours or 17 amps for one hour. Depending on how old your battery is or its condition, your mileage may vary. 50% of the rated Ah's is a good rule of thumb, if you're caught with a dead alternator.

As you can see, there are quite a number of combinations in this process. The ammeter is a great tool that can help you determine what is happening with your amperes. Most ammeters found in airplanes have a scale that reads from a negative number on the left, to zero in the middle and a positive number on the right side, for example -30 0 +30 or -60 0 +60. When the needle points toward the negative number, the load exceeds the available alternator and battery amps. When the needle points toward the positive number, the alternator output exceeds the load and the batteiy is being charged. When the needle is centered, the loads are either balanced to the available output of the alternator and battery or the system is turned off. This one instrument provides a great deal of information.

To help visualize what an ammeter does, imagine a piece of pipe that is in a system where water can flow in either direction and at different volumes. See the "Water Ammeter" image below. The triangular shape of the cork float will help the rod weathervane relative to the direction the water is flowing in the pipe. The pennant on the top of the rod will raise and lower relative to the volume of water flowing through the pipe. You can tell from this example that the ammeter needs to be in the thick of things relative to the push and pull of the alternator vs. the loads much like a rope in a tug-of-war. 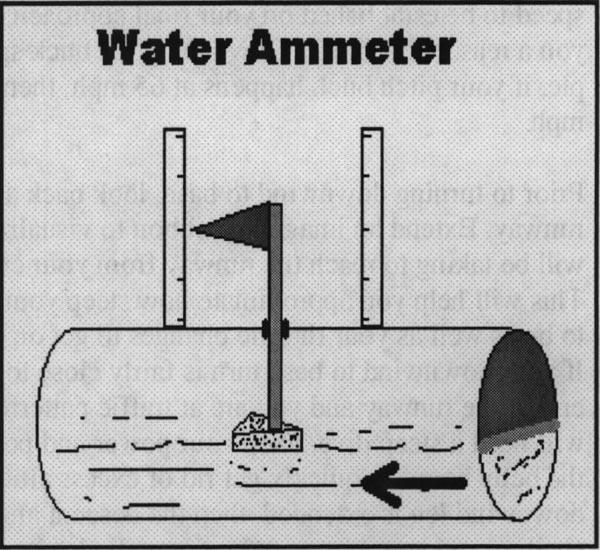 Ammeters use a device called a shunt to measure the rate of the charge or discharge of the batteiy. A shunt is nothing more than a bar of metal of known resistance with large bolts on either end. The wire being measured is interrupted and all the current is sent through this bar. Two smaller wire connections near the large wire connections allow wires to be connected to the actual ammeter.

The first two locations have the disadvantage of sensing the large drains of engine cranking when engaging the starter. They also require the shunt and connecting wires to be large 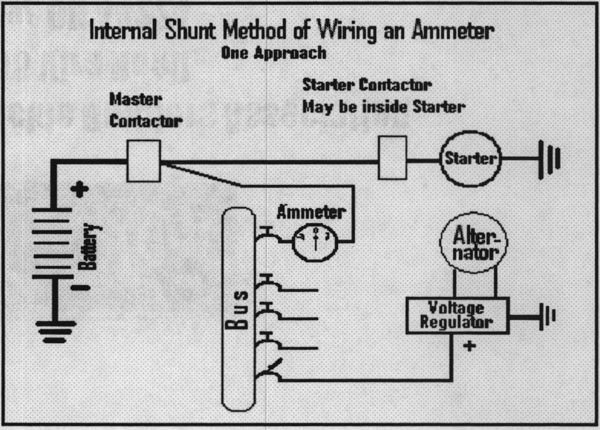 If you only see the needle pointing to the left on the ammeter, indicating a discharge, when you turn on the loads in your plane and no indication of charge from a functioning alternator, then you have some rewiring to do. You will find that the path from the alternator output, back to the battery does not go through the ammeter. A good rule of thumb for an internally shunted ammeter is:

? Wire the + post of the batteiy (or switched side of the master contactor) to the + terminal on the ammeter.

? Wire the - terminal of the ammeter to the bus.

? Wire the + output of the alternator to the bus.