Ed Notes: Mike describes in this installment alterations to existing Quickie airfoils to improve their flying qualities. These new airfoils have not been wind tunnel tested in any way. The plots necessary to produce these airfoils have not been provided. Attempting to build and fly an untested airfoil based on this article is not only foolish but may result in death.

Nobody I know can tell me the original intent of this airfoil. As noted earlier, this airfoil has a large, rounded leading edge, and that really helps delay and soften the stall of an airfoil. Harry Riblett's book, Spin Resistant Airfoils, discusses this idea in detail. And my analysis of his coordinates using a completely different software package also proves his point. He uses the Airfoil ii package for analysis only. He designs his airfoils without the use of this software: he uses a calculator. Oh my god, I'm feeling faint.. a calculator? That's what he told me. I have it in writing. Gosh that means I'd have to think... 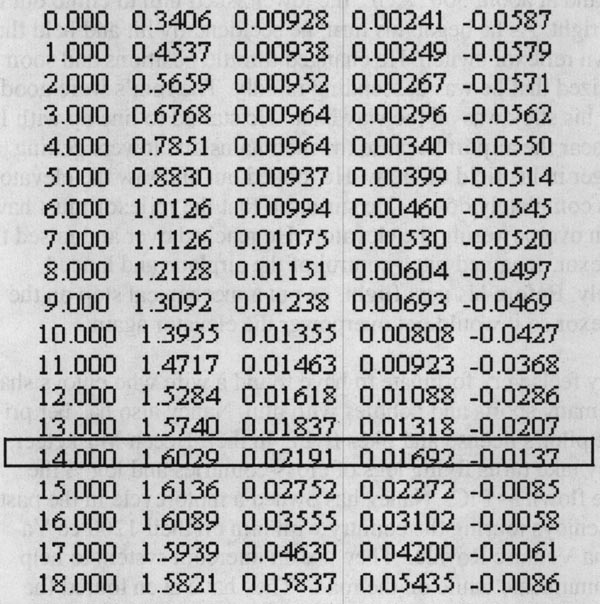 Figure 8 Polar of the E1212 Airfoil at Stall Re

Since this airfoil isn't as heavily loaded as the canard, it doesn't have such a great lift requirement. That's why the CI at zero degrees AOA is 0.3406. However, that's more lift than a Lancair 4 airfoil produces and less than a Piper Cub airfoil. The Cm is average at -0.0587. That's quite a bit less than the canard, but it is producing a lot less lift at this Re and AOA. It sure is draggy at 92.8 drag counts. At cruise speed, the drag decreases to an acceptable, but not particularly low drag of 76 drag counts at cruise for the Quickie and about 71 drag counts at cruise for the Q2/Q200's. The Lancair 4 airfoil has only 38 drag counts by my computations, so it has half the drag as the E1212. The Lancair 4 main wing is very heavily loaded. The aircraft stalls at almost 80 miles per hour, though. Looks to me like it needs a canard. But it doesn't need the E1212. I hate to tell you all this, but the El212 produces more drag at this Re than even the USA35b airfoil does (86 drag counts)? that's the Piper Cub's airfoil! Sorry.

If you follow the lift down the lift column (column 2) you will see that it increases with increasing AOA up to 15 degrees at which point the stall occurs. On paper. In the real world, because we fly on 3-dimensional wings and not 2-dimensional airfoils, stall occurs around 14 or 15 degrees. I have included the AOA up to 18 degrees, and could go more, for a specific reason: we can get an idea of the nature of the stall. Remember, for this main wing, or aft wing in the Q's, we want to achieve stall only after the canard, or front wing, stalls, and hopefully not at all. If you are still moving forward and the wings are producing very little or no lift we call that taxiing. I prefer for safety reasons that you do that only on the ground. This airfoil not only has a rounded edge, but has "forward" camber. In other words, most of the lift happens in the first 25 percent of the airfoil. 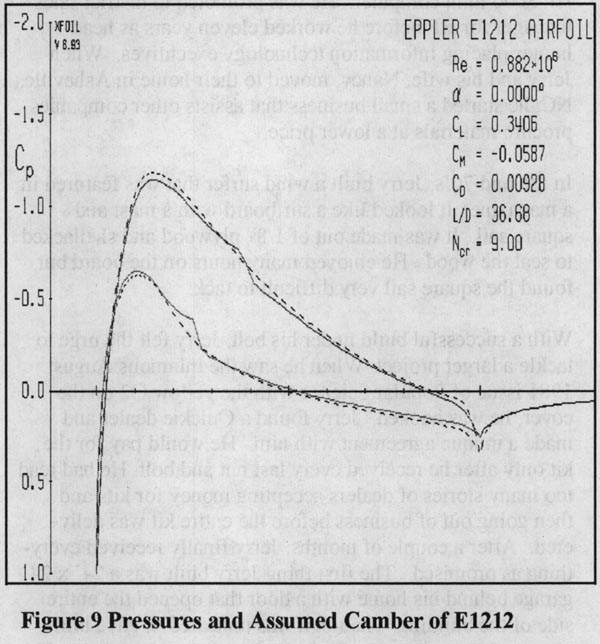 Here is the depiction of the pressures with several degrees angle of attack together in one figure. I can already sense your excitement: 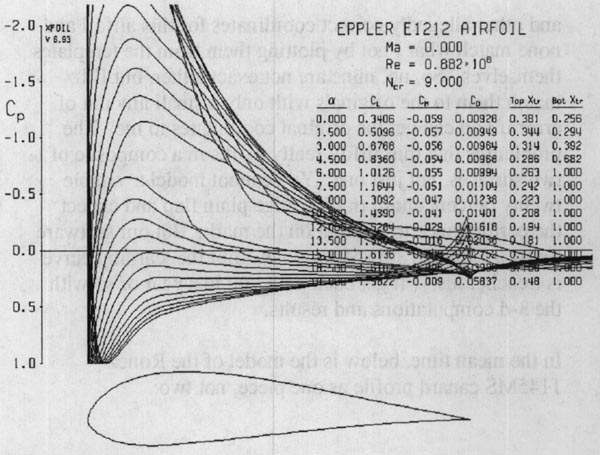 Figure 10 Combined Polars of E1212 Near Stall Re

Ok. I know you can't read all the numbers in this figure, but you already have them in Figure 8. Look at the squiggly lines. These are the depictions of the lift to drag at the differing angles of attack. You'll see that this airfoil at this low Re (low speed, small chord) gets a CI past 1.6 before it stalls. This is finally where this airfoil starts to shine. That's pretty good lift by anyone's standard. Then, after the stall, there is not a sudden decrease in the CI. Notice that CI decreases only minimally over the next three degrees. Folks, that's what we want: a soft, gentle stall. Once again, this is the basic stall nature of this particular airfoil. A 3-d wing on an airplane can be more gentle or sharper depending on how much the designer had to drink the night before he signed off on the design. Though I've badmouthed this airfoil's drag, some might consider the drag a "virtue" of this airfoil. Remember that tandem wing and canard aircraft seldom have flaps. Yes, the Beech Starship (aka the Star-Barge) does have flaps. Yes. And it has a canard that sweeps both forward and backward to accommodate the Cm and lift changes due to flaps. This helps shorten landing distances and decreases the stall speed (that's debatable when you talk to the pilots). The sweep also lessens the chance for main wing stall in the accelerated mode I was telling you about earlier. So, in this jaded light, the drag may actually be seen as a benefit in the approach to landing mode since the Q designs do not use flaps. How much this might slow the aircraft for positive purposes I'll leave up to the discussion of others and just speculate here.

Assuming 2-dimensional software can actually reflect the real world aircraft (it cannot), we may be able to do better than the E1212. A lot better. That's next! Hmmm.. .and even a better canard? That's next, too.

Ok. Let's ditch the speech about drag being good in the use of the E1212 on the Q's. Let's just assume drag stinks no matter how it's dressed. Indiana Jones hates snakes. I hate drag.

What airfoil will satisfy us? I want an airfoil that lias ZERO Cm. Unless I use one of the new, reflexed airfoils or a purely symmetrical airfoil, I'm going to have Cm (pitching moment). Reflexed airfoils are difficult to obtain low drag with but are good for low or no pitching moments. Symmetrical airfoils (ones with no camber) have no pitching moment, and can have somewhat lower drag, but they do not usually create much lift and usually have sharp stalls. Therefore, we want a zero Cm airfoil with loads of lift and very low drag with a gentle stall for this specific application. To achieve this we are going to have to wait for the next rendition of software to come about. Airfoil ixii, wait for the laws of physics to change for the better or accept some compromises.

It is now time to compromise. By the time the 6,011th edition of Airfoil ii comes out, we'll all be flying like the Jet-sons and airfoil aerodynamics will be an issue of historical interest only. So let's go for lower drag than the E1212, continue the search for a soft stall and have a bit more lift to ensure against the LSl's anxiety-producing higher lift coefficient, and, while we're at it, decrease the negative Cm as much as possible. 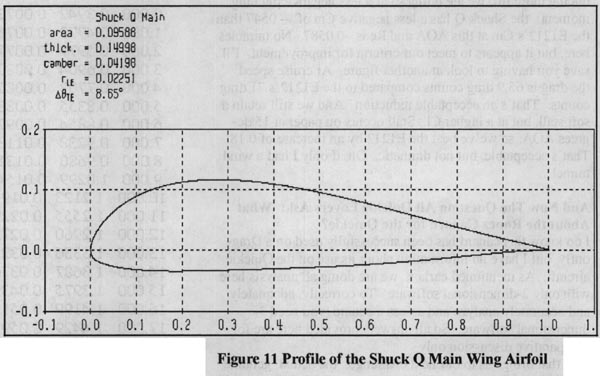 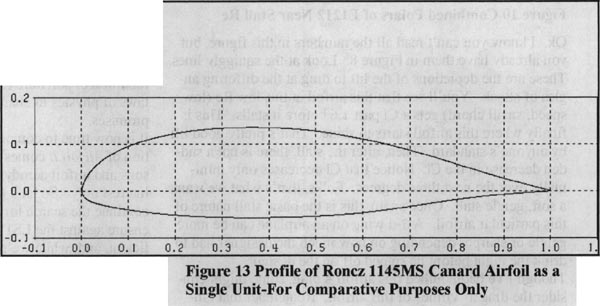 What did we get? At this low speed, the Shuck Q Airfoil has essentially twenty-one less drag counts. We've discussed earlier whether this is good or bad. The drag is only 70.8 drag counts compared to the E1212's 92.8 drag counts at this Re. More lift? Yes, more lift. The Shuck Q has a Cl of 0.3849 at zero AOA and the E1212 has a Cl of 0.3406. That's a good increase in lift. And even though we are producing more lift, we are doing so at a less negative pitching moment: the Shuck Q has a less negative Cm of -.0547 than the E1212's Cm at this AOA and Re is -0.0587. No miracles here, but it appears to meet our criteria for improvement. I'll save you having to look at another figure. At cruise speed, the drag is 65.9 drag counts compared to the E1212's 71 drag counts. That's an acceptable reduction. And we still retain a soft stall, but at a higher Cl. Stall occurs on paper at 15 degrees AOA, so we've beat the E1212 by an increase of 0.18. That's acceptable, but not dramatic. Oh, if only I had a wind tunnel...

And Now The Question All Quickie Lovers Ask: What About the Roncz Canard for the Quickie?

I do know this canard has been successfully used on a Dragonfly, but I have no information about its use on the Quickie aircraft. As mentioned earlier, we are doing all analysis here with only 2-dimensional software. To correctly, adequately and accurately analyze and assess a canard, you need 3-dimensional software. So all answers provided here are for comparative discussion only. And that brings us to our next challenge: the actual, genuine coordinates of the Roncz 1145MS (canard) airfoil do not exist to my knowledge. Yes, I know they are posted in an archived site on the internet. But I have plugged in those coordinates, and other allegedly correct coordinates for this airfoil and none match what I got by plotting them from the templates themselves. So, no, mine are not exact either, but I'll match them to the originals with only a small amount of error if you can get die original coordinates to me. The problem is that this airfoil really works in a composite of two surfaces, not just one. You cannot model a simple twenty percent chord trailing edge plain flap and expect the performance to be right on the mark. But our software limits us. I have 3-d software now, but the learning curve is treacherous. I'll get back with you in a year or so with the 3-d computations and results.

In the mean time, below is the model of the Roncz 1145MS canard profile as one piece, not two: 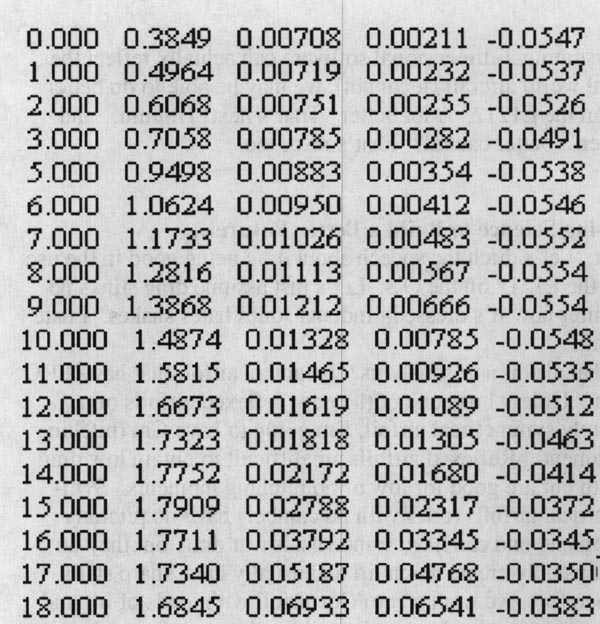 At cruise speed, the Roncz 1145MS has only 49.7 drag counts. That's outstanding! Its pitching moment is only a ? 0.068 which is quite good considering the CI produced at cruise is a whopping 0.412. That's up in Cub territory. Here is the lift drag polar for the Roncz Canard at cruise Re: 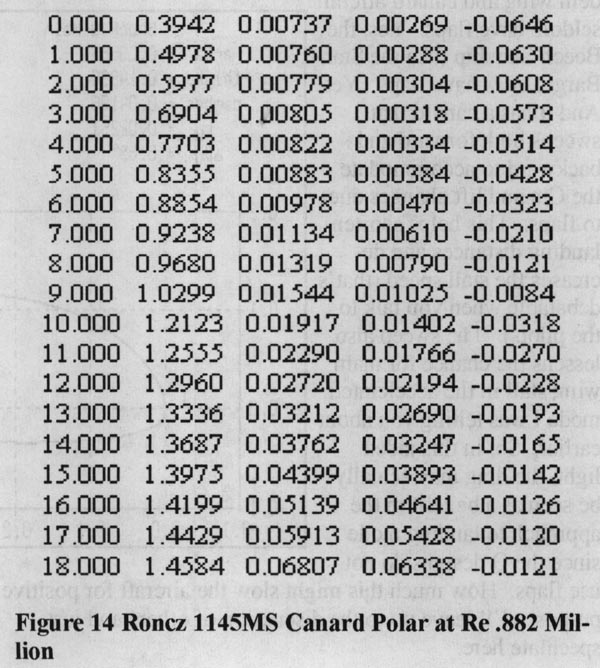 My around "twenty counts" of pitching moment rule doesn't work here. There are 120 counts, not twenty, so the 3-d effects of this airfoil cannot be accurately represented here. According to these numbers, getting adequate trim in even the LongEze would be difficult. The lift is not as much as the LSI, but the leading edge is known to be resistant to the Splat Effect Factors. Well, it was worth a try. It definitely does not overpower the main wing. Speaking from gut reaction only, I think this airfoil would work fine on the Quickie series, particularly the Q2/Q200's. I particularly like its low drag. I can't vouch for it having great trim characteristics, but you can ask LongEze pilots what their impressions are. (Continued in Q-Talk issue 97.)