A couple of years ago, Sam Hoskins, a Q200 pilot from Mur-physboro, IL, made the hearts of all Quickie enthusiasts swell with pride as he completed a coast-to-coast flight from California to North Carolina in one day. That was quite a trip and deserved to be featured in the June 2000 article of Kitplanes Magazine. He represented all of us.

Following this amazing cross-country flight, he was then challenged with new questions. What was he going to do next? What could he do that he has not already done in his 1,000 plus hour plane? Well, after much thought, he had an answer. He decided this year he would enter the race from Kitty Hawk, NC to Oshkosh, WI sponsored by Klein Tools. He had two big goals for the race. The first was to finish the race safely and the second was to beat somebody, anybody!

Once the application for the race was in hand and completed, he had many things to do to get his plane in top running order. Unfortunately, last year, shortly after Oshkosh, he broke his tail spring, which caused the wheel pant, canopy, and propeller to break. He had started to repair the damage but winter weather slowed his progress as well as feeling sort of discouraged. Now he had committed to this race and had not even flown the plane since the damage occurred. He had to quickly find a new propeller, install an auxiliary tank, do weight and balance, boost his insurance, apply race numbers to the side of his plane, etc. He literally was working on his plane until the last minute before race time.

Sam arrived in North Carolina on Friday night, July 19, and was immediately impressed by the volunteers who helped organize and run the event. Everything was well done. Saturday morning participants had the option of time trials, measured both by timing and radar, if they would like. Sam elected not to fly. That afternoon a strange weather system circled around their area. He had never seen anything quite like it. Later, the pilots were invited to tour a local aquarium reserved just for them, as well as enjoy a great dinner.

Sunday morning, race day, Sam was listed to take off near the end of the group. By the time he took off, some initial entrants had already landed at the first stop. He flew full throttle all the way. This was a new experience for Sam as he usually does not run his plane that hard. The engine was making odd noises, he noticed strange vibrations and he heard more air than usual whistling through the canopy. He was on the edge of his seat the whole time. He had to restrain himself from reducing power. He flew at 3,500 feet for most of the first leg. The highest point was about 5,500 over the mountains.

There were three planes in Sam's sprint class. He knew one pilot, Rob Martinson, would be hard to beat because he had a very fast Varieze. Sam knew very little about the other pilot, Frank Pullano, except that he was in the Air Force and also had a Varieze. That pilot took off before Sam and elected to fly at about 8,000 feet. This was a bad idea because he met towering cumulus clouds and had to divert. Sam was able to land in Dayton, OH well before Frank, logging a three hour and 2 minute flight. Once on the ground, Frank told Sam about the weather problem and teased in colorful terms that he would beat Sam on the next leg. That evening the flyers had a nice banquet where Cliff Robertson was the guest of honor and Darryl Greenamyer shared the experiences of working with a F104.

The next day Sam again was scheduled to take off after Frank. This time Sam flew at about 1,000 feet and Frank at 1,500. Soon Sam could see Frank's plane in the distance. He slowly crept up and was actually able to pass underneath Frank in the air. That was a thrill, to say the least, especially since Frank had done all the bragging before the race. Other fast, hot rod, planes were flying very low and the experienced pilots were joking over the radio. One pilot said, "Hey, we're doing a cross word puzzle up here. Anybody know a three letter word for oil slick?" Another pilot said, "Yak!" That really made Sam laugh. Another time after Sam reported his position, a pilot said, "I'm right below ya. Don't pee."

Aurora Airport was designated to be just a pylon turn but because of questionable weather, the instructions were to fly by the timer, circle around and land. Safety was the ultimate goal throughout the race. About 12 miles outside of Aurora, Sam suddenly started to hear a really bad noise. It went from bad to worse. It seemed to be coming from the right side of the plane. It was kind of a screech, possibly the sound of bearings seizing. He checked for smoke, no, the temperatures looked fine. He was really confused. When he reduced power, the sound changed. He radioed that he was having a problem with his engine and would not be circling around. He would simply be landing. He was going 120 mph across the numbers, luckily it was a long runway. He landed safely and immediately started to inspect the airplane. He moved the prop, checked for metal on the dipstick, etc. He then discovered the source of the horrible noise. Like many of the flyers, Sam had taped off all of the seams of his plane before the race to eliminate drag. This included the vent on the passenger side of the plane. The left vent was left open. One side of the tape had let loose and was vibrating in the wind. As he flew, the tape frayed and got shorter, which changed the frequency of the sound. Sam was certainly relieved when he surmised that the tape was the culprit. About an hour and a half later, the racers took off again and Sam was back up in the air, minus the scaiy noise. 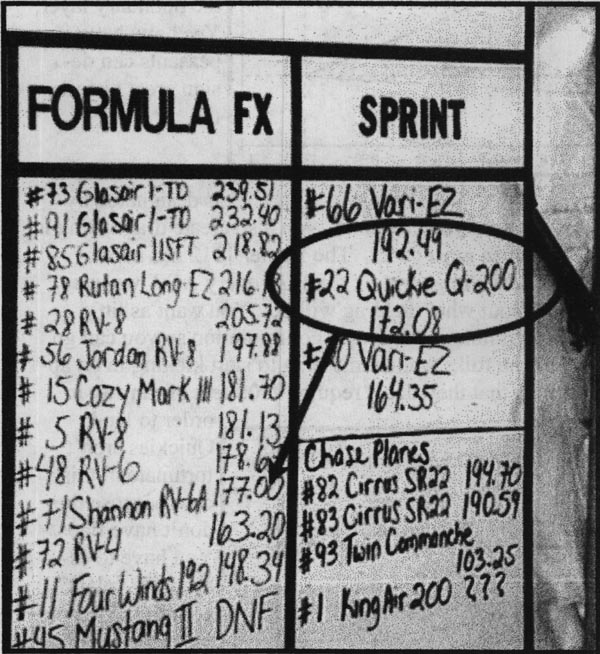 The third leg, Sam flew low again but was not too concerned about Frank because he knew he already had him beat. The marker for the end of the race was a pontoon boat near War-bird Island in Lake Winnebago. That evening a dinner was held for all participants and the race results were announced. Sam came in second in his class. Frank's response was, "I'll get you next year." As you can see below, Sam's time of 172.08 was faster than an RV4 and right on the heels of some RV6s with much larger engines.

Overall, Sam enjoyed the experience and would really like to see more Quickies entered into next year's event. We feel Sam did a great job. Again, he proved to be a bright light in the Quickie community. We are proud of him.