The Great Epoxy Caper or Just What to Hell Epoxy Should I Use?

To follow is a collection of excerpts, comments and facts taken from Dragonfly builders and several other composite aircraft newsletters. Also a follow-up call to Hexcel themselves.

I hope everyone has been following the changes that have occurred to the epoxy system that we use during construction of our Dragonflys, if not I suggest everyone refresh by reading DBFN #46-page 4 "In a nut shell", Hexcel's Epolite I & II (alias Saf-T-Poxy I & II) has been discontinued because it had a chemical, MDA, which has proven to cause cancer in laboratory testing. The Rutan Group (these guys be the pro's) had intensely researched all available epoxies on the market at that time and came up with a suitable replacement called PR2032/PH3660-2 or now known as PTM&W.

One of the only negatives of the PTM&W is that it requires a scale or pump change. The old Hexcel had scale ratio of 100 to 47. The PTM&W ratios are 100 to 31.3. I've had numerous requests on how to change over the Michael's Engineering Stick Stuff Dispenser. Please find below a excerpt from the 1994 Wick's catalog (sorry for the delay). 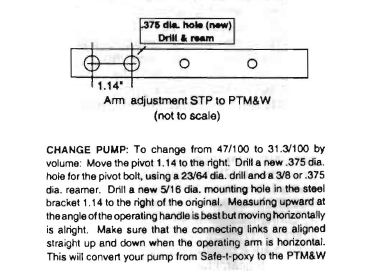 Below is a letter from David Morris, Dragonfly builder out of Garland, Texas with his comments on PTM&W

"My wife likes me again! She thinks I've quit working on the Dragonfly. Actually what's happened is that I've started using one of the new epoxies. PR2032 and PH3660 or what is sometimes referred to PTM&W, recommended by the Rutan to prevent cancer, kidney and liver failure, and all the other nasty little side effects predicted by the EPA for SAF-T-POXY. The hardener (PH3660) will remind you of dirty baby diapers (if you're stupid enough to sniff it in the can), but after it's been mixed with resin it's practically odorless. Thus, our house is no longer saturated with noxious (and, now we know, carcinogenic!) fumes every time I do a layup.

PR2032 and HP3660 produces a much clearer mixture that doesn't discolor your white foam after it's been laid up. So your parts end up staying whiter even after cure. That might be a blessing when you start the exterior finish. The mix ratio is radically different, but it took me only about 10 minutes to build a new epoxy scale for the new ratios. The resin is much more viscous than the hardener, you have to be more careful to stir it up completely - you don't get any visual clues. I've also noticed that knife trim stage doesn't develop until several hours later than with the older epoxy, but overall cure time seems to be about the same.

Hopefully, the new epoxy will be kinder to us in the long term, health wise. In the short term, it has allowed me to sneak out into the garage and do layups even when the house is occupied. I'm not the one to perform any kind of engineering analysis on it, so hope it's as strong as Rutan says, but I highly recommend it for "environmental" reasons!

Well in the meantime, Hexcel has come out with their replacement, Epolite 2427. There is some nice advantages over the Epolite (Saf-T-Poxy) and even the new PTM&W.

Hexcel has completed development of a MDA and styrene free epoxy system. Samples have been shipped to determine user reaction. Carl Denk, local Cozy Classic builder, obtained one of these quart samples of the new Epolite 2427 and we tried it out last night on some test pieces. I (Terry Schubert) did a 4 ply BID tape and a 3 ply inside corner. The resin was at an ambient temperature of 70 degrees.

This replacement system uses the same Epolite (Saf-T-Poxy) resin (the clean stuff) but a new low toxicity hardener #2427, formulated only from compounds that are on OSHA's approved list. It appears to be of lower viscosity (thinner) than the standard Saf-T-Poxy, wets out quicker, and has a very low amount of odor. The hardener is light amber in color and has a sweet smell which reminds me of the West System Hardener.

Epolite 2427 is compatible with Saf-T-Poxy and PTM&W's PR2032. It used the same mixing ratio as the old Saf-T-Poxy I & II so you can use your epoxy pump without modification. As the new system changes only the hardener it appears you need only to discard your old hardener to be within safety compliance (more on this later in this article - Spud).

Physical properties are reported to be equal to Saf-T-Poxy except stronger in impact resistance. It is superior to the RAE resin system in compressive, tensile and flexural strengths as well as in temperature resistance.

The vapors are heavier than air so ventilation equipment should pickup between the bench and floor level.

I called Hexcel for verification at (818) 882-3022 and talked to quality assurance chemist Deidre Crutchfield. She said the new hardener would work with the old resin although IT WOULD NOT GIVE THE BEST RESULTS. She said that combination would be OK for NON-STRUCTURAL application, however.

The new epoxy uses the same ratios as the old ones. You can order the resin from Wicks as number 2427A and the hardener as part number 2427B. Your liver will thank you!

(From the Cozy newsletter)

I (Nat Puffer) have obtained a gallon of the new Epolite 2427 and have used it on numerous layups. It has a viscosity of 1000 cps, which is much lower than the recently approved PTM&W PR2032, and is much faster in wetting out and easier to work with. It is now #1 on our recommended list. Some of our builders, who have already switched over to the #2427 have been very impressed. If you have already built parts for your airplane with Saf-T-Poxy, RAE or PTM&W, there is no need to worry because all of these epoxies have acceptable properties and adhere to each other if the surface has been properly prepared.

I contracted Patrick Taylor of Viking, who has just finished up doing his own research on the new Epolite #2427. He concurs with all the findings the above people have found. He also gives it his Number #1 recommendation, followed, of course, by the PTM&W.

I called Wicks Aircraft in February to order some 2427 and said it had been recalled????? They said it was sent back for a formulation change. I contacted Hexcel for the straight scoop! I talked to Phil Cuthbert who was very knowledgeable on the new epoxy. They had found out from feedback from the earlier samples that they had sent out that some builders were having a clouding problem after about 7 to 8 days. What was found is that the new 2427 is very acceptable to moisture absorption. Hexcel changed the formulation very slightly to help hinder this problem, but Phil says that the builders will have to be very cautious to properly reseal their containers. He even suggests that if it is to be any extended time, it would be a good idea to return the hardener/resins to their original containers - Spud.

I have not used either of the new epoxies as of this writing, I plan to order the new Hexcel 2427 within the next couple of weeks, but when one reviews all the numerous advantages of either of these new epoxies it seems like a "NO BRAINER" - Spud.

The foregoing article was contributed by Spud Spornitz, guru of the Dragonfly Builders and Flyers Newsletter.

You can order a PDF or printed copy of Q-talk #45 by using the Q-talk Back Issue Order Page.