(ED. NOTE: This is an unusual and interesting PILOT PROFILE as seen from the perspective of a builder's mother. Mitch Strong's mother happens to be a writer and I know you'll enjoy what she had to say in Signs of the Times - September 1987.) 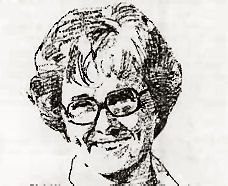 Today a small, unusual plane flew over our home. From the garden where I was working, I raced to a more open area and waved jubilantly. The pilot acknowledged my antics with a slight tilt of the wings and roared off over the treetops leaving me proud, scared, and filled with wonder. For the pilot was my son, my 27-year-old son, and he had built, with his own hands, the plane which now shot through the sky.

For three years he'd spent every spare moment working toward this day. There has been hours of frustration along with the good times when everything went smoothly. And slowly, slowly, a sleek little craft began to emerge.

We'd joked about the first flight. Who'd be the passenger - wife, father, sister, mother? That was the punch line - mom, who could barely relax on a 747. (Actually, there'd be no passenger on the first flight, nor for 40 flying hours afterward. The law said so, and he would not have exposed us to that danger anyhow.) We joked to still our fears, for we knew first flights for home-built aircraft are prone to problems ranging from annoying to disastrous. A part of me wished he'd park it in his backyard for a conversation piece, but then another side of me shared his excitement, understood his elation at completing an almost insurmountable task single-handedly.

I recalled the long-ago day when a truck had delivered boxes and boxes of fiberglass, foam, epoxy, and other materials. Upon the wall Mitch had tacked a picture of the Q-200, a sleek futuristic plane, the finished product, and we tried to believe that from the jumble of materials he'd actually produce that magnificent little aircraft.

When he was a child, we, on occasion, partly in jest, partly in exasperation, called him "picky fingers". He just couldn't resist taking things apart. Sometimes he got them back together, sometimes he didn't; but those curious little hands kept right on exploring and learning, in spite of stern parental lectures.

There came a point, however, when I began to realize I could turn to Mitch for almost anything - putting up the Christmas tree, getting the mangled spoon out of the garbage disposal, repairing my typewriter. Those meddling fingers had become clever, capable hands. So, I wasn't really too surprised that he got all the contents of the boxes together and that his creation had just roared overhead, its pilot safe and sound and about as happy as a human can be.

There are moments when I think I'd like a more conventional son, one about whom I'd not have to worry, a stamp collector, perhaps. But then I see him taxiing down the runway, lifting light as laughter into the sky, and disappearing from our sight, and I know I wouldn't have him any other way.

I expect that sometimes the characteristics in our children which are most trying are the glimmerings of their true potential. We have a daughter who would defend her position hotly - we called it arguing - until we were at our wit's end. She had a photographic memory, a facile tongue, and a shrewd mind. To put it mildly, she was a challenge. Today she's any attorney, and all those traits which left us frazzled are her finest assets in her chosen career.

So, maybe the determined child who cannot be squelched is the one to watch. Maybe his potential in one area or another is so strong that it will grow and flourish in spite of all attempts to discourage it. If so, he will make a contribution, sooner or later, to the adult world.

Maybe we need to nurture and encourage rather than scold and subdue. To take the long-range view, and to thank the Father of all children for their variety and promise, and for the sweet privilege and sober responsibility of tending the vigorous plant.

You can order a PDF or printed copy of Q-talk #12 by using the Q-talk Back Issue Order Page.