It is pretty clear, at least to me, that the Onan engine is not a world-beater in the Quickie airframe. To be sure, it achieved the design goal of wonderful fuel efficiency at a reasonable airspeed and reasonable load. It is safe to say that any sane pilot who has experienced the typical Quickie's 200-300 fpm climb rate would agree that the seatbelt could be replaced with a ball hitch with no loss of safety - butt pucker being of extraordinary force in being able to attach a pilot to his seat. Certainly a number of guys are flying their Onans regularly and have either never thought of the extra margin of danger in the poor climb or have become immunized to such thinking from hour upon hour of successful operation. However the whole wonderful experience could be ruined in less than 60 seconds. Of course a low altitude engine failure might happen to any pilot, any day, any aircraft, but what options have we to improve our delightfully little airframes?

To date, 4-cycle enthusiasts (die-hards?) are limited to the half-VW engines. As chronicled here before, the Global version of this engine (now called the Mosler) tested very well in one aircraft flown by this editor. Before it crashed, a crash not due to the engine by the way, it had about 80 hours on it with only some minor teething problems. A fair test, I think. Tom Solan in GA, Paul Wright in England and Steve Hickam in AZ all have this same engine for their Quickies but none have reported flight results to corroborate my enthusiasm for the engine. Paul HAS flown with his but he is either too deliriously happy to write or...something else. Besides Mosler, Rex Taylor of HAPI engines has a half-VW in development (perhaps mounted on a Quickie) and there may be one more company about to enter the same arena. Unless you want to develop ($$$$$$) your own application this is the only 4-cycle that's tested out well on the Quickie airframe.

On rethinking this last statement, I'm wrong. The Koenig engine seems to have enjoyed certain success on the Quickie, but engine availability, parts, and details of the conversion are things on which I have no solid information. Can someone enlighten me?

Norm Howell once observed in a phone conversation that a person can really tell that an engine is reliable and adequate when new aircraft designs start appearing specifically for that engine. Good observation, don't you think? How many designs came out for the Onan? How many designs are out for the Rotax? A-HA! or Eureka!, you should be saying about now. Pay close attention you 2-cycle skeptics because a couple new designs were out at Sun 'N Fun and I expect Oshkosh '88 to be most illuminating.

My guess is that about a dozen Rotax's are flying in Quickies now (447's and 503's). Probably a dozen more are in the building stages yet. Quickie world record holder Norm Howell has converted to a 503 and is about to fly. Jinx Hawks and Brock McCaman pioneered this installation in the Quickie and are still enjoying success after over 100 hrs. in each of their planes. Norm is currently in CA and he is benefiting from the work of Jinx and Brock. His is a second-generation installation and I expect him to relate some improvements if there are any to relate.

Brock very thoroughly revealed the experiences that inspired his "conversion" to the 2-cycle ranks in an earlier QUICKTALK. We should all read it again. Personally, I enjoyed flying behind the Global, but after a trip around the patch in Jim Prell's Suzuki 2-cylce conversion believe me I'm sitting up and taking notice! I recently asked Brock a key question, and here's what he wrote:

"With respect to your question regarding the potential stake for an investor in such a project, I list the following in current year prices using the L.E.A.F. catalog as a guideline."

Brock sez "The Rotax engines have been running well, better now than when new. In flight, the airframe is dead smooth with no vibration. From the cockpit the engine sound is still reminiscent of a vacuum cleaner spooling up for action. What still impresses me is the ease at which it sails the little Quickie along - effortlessly. On reliability, neither Jinx nor I have crashed yet or have had to deadstick it somewhere. Once there was a slight hesitation, but that was inverted..." Now doesn't that sound like the dream you had when you first bought your kit? Times a-wastin', brudder!

My Rotax 503 Quickie is just about to be trailered to the airport for taxi tests. I've had a heck of a time with the original gas tank leaking (the plane was bellied in once before I owned it). After 5 attempts to seal it, including replacing the bottom, glassing the inside and giving it a dose of sloshing compound, I got too anxious to fly (no, I didn't pretend I was a flying bomb and go with the leaky tank!). I had a 22 gauge steel tank welded in the shape of the old one. To get it in and out of the plane it is 2 inches narrower and to recover the lost volume it extends over the elevator control trench and is elevated at the top. Still, the steel tank was no piece of cake: it leaked initially and pinholes had to be brazed over. It's now OK and actually holds 8 gallons. A nice touch is that the filler neck is at the top center (hope this passes FAA inspection) and acts as a nice catch for the brake handle. The 2-inch clearance on the sides is great for storage of maps and other small stuff.

ED. NOTE: I too thought a center top filler was great. Mine has a wide mouth so I can get a vacuum hose inside to suck out any trash around the inside screen. HOWEVER...in my crash last year, also in a plane with a center filler, I had 7 gallons of gas empty out over my upside-down body and was unable to reach the switches to shut them off. A neat filler, perhaps, but I coulda been a human torch.

Last February 28th I took my Quickie "Buttercup" (N-3774X) out for a flight around Aquidneck Island to take some photographs. After taking the pictures I headed for the Newport airport and got in behind a touch-and-go Cessna. The Cessna decided to do a full stop so I pushed the throttle up for a go-around and the engine revved to a full whine but no power was getting to the prop. It took me a second or two to sort out what was going on. I had the nose up for the go-around, but with nothing pulling me forward I mushed down from about 15 feet, breaking the prop and canard on the runway. It was disheartening. The plane had been in the hangar for most of the winter getting a new tank and I had just fixed everything up for the summer.

The problem lay in the Spitfire reduction drive on the Kawasaki 440-A engine. I had had a similar lack of clutch engagement in that drive on that unit about a month before when I started the engine on a very cold day. That time it happened on the ramp. I was upset and tried to get to the root of the problem then, but I was frustrated because of the complete lack of support for the part. Advanced Engine Design, which made the 440-A Quickie retrofit and the transmission, was out of business. I called all over the country for other possible Kawasaki transmissions with no luck. I was faced with getting a Rotax just for the lack of transmission parts. I talked to all in and around the airport and someone suggested that the clutch may have failed simply due to the thick oil in the 5-degree weather. That seemed possible since the next week saw a warming trend, the reduction drive delivered the power and I flew the plane successfully for a month before the crash. I am grateful it happened over the runway instead of over the water.

Buttercup is now no longer an aircraft, and I miss her after five and a half years of happy flying, but at least my friend Will Heacock and I are within months of finishing a Solitaire sailplane.

I recently flew to Camarillo airport on a picture-perfect Saturday and met Jinx Hawks and Brock McCaman at their hangar. Both these Rotax 503 Quickie pilots have around 100 hrs on these installations with no problems except Jinx's broken gear case bolts noted in last Q-Talk.

I took some air-to-air photos of Brock and his Quickie that should remove any doubt as to the viability of the Rotax engine in a Quickie. I was flying a 180 hp Piper Archer and Brock could outclimb and outrun me simultaneously. Earlier he demonstrated a normal takeoff, rolling about 500' before breaking ground and climbing out about 20 degrees nose high. A Cessna 172 taking off after him looked anemic by comparison.

I really think the Quickie could enjoy a resurgence of enthusiasm once a few more people gain experience with their Rotax installations. It's not that expensive either. I spent about $2000 for the 503 engine, drive, cowling, prop and instruments which is about what QAC used to charge for the Onan package.

Also I recently visited Rich Hoskin in Apple Valley. He was one of the first Quickie builders in this area and flew his plane a couple times off of El Mirage dry lake. He didn't like the ground handling and low climb so he brought it home for some slight (???) modifications. See photo. Interesting, ain't it? I sure want to be there when it flies (if it flies), and hope Rich has his life insurance paid up!

This canopy ejection system works, but only on Quickies which have their instrument panels mounted to the fuselage rather than the canopy framework.

Use one solid piece of model airplane piano wire and thread it through one hinge, then a wooden handle and then finally the other hinge. Leave a half inch of wire at the end of each hinge and flox it in place.

This rig also gives you a much better chance of prying your way out from under a Quickie if it ever flips over onto its back.

Reference Q-Talk #5, page 5, paragraph 1. I have applied for a modification approval as follows:

2. Laid up one UNI at 45 degrees along the entire length to lap around onto the leading edge so that it will gain adhesion under 2 outside laminates from the curl around the leading edge of the assembled elevator foam cores.

3. The assembly is completed ready for the 2 outside laminates when CS 16 with the front foam piece is set into the microed foam core of the elevator after quality inspection. 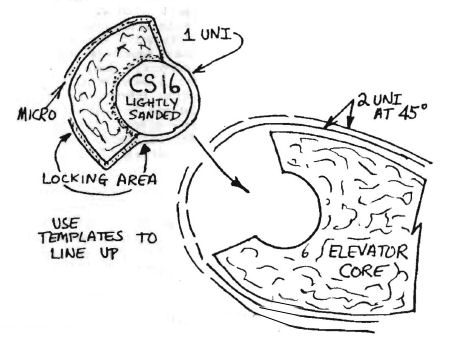 If all goes well, extra weight is only approximately 5.5 oz. per elevator.

My Stage Inspector says that if the large contact surface of the tube is in solid micro completely, there is no way that it will slip. However, one cannot see what's going on in there.