I fly once a week or so and have accumulated 251 hours. About the only thing that has happened to me is a minor fuel leak that caused nice black streaks down the belly of the plane every time I flew it. Finally traced it to a loose cylinder...it was leaking out of the cylinder base. 3/4 turns on the screws and the leak disappeared like magic. Other than that, everything is routine.

Everything is running fine. Improvements this year came in 3 areas. 1. I added an auxiliary fuel tank at the crevice directly behind the bottom of the seatback bulkhead. 2.5 gallons fills via the original filler cap and doesn't interfere with baggage access. 2. The chord of rudder and vertical stab was increased by a few inches. I also replaced the lower phenolic hinge point with an oversized one made from 1/4 inch aluminum with an oil-lite bearing pressed into the hole for the torque tube. I had always wondered about the phenolic hinge ever since I found a cracked one on my old Onan Quickie. The bigger rudder necessitated the beef-up. 3. I finally got around to painting some go-fast stripes on the Quickie (probably ought to be good for another 5 mph!).

At 88 hours, I smelled something HOT just after take-off. Instruments were OK, engine was smooth and no fire or smoke was visible. I made a quick pattern and landing. In only 3 minutes the engine had lost half the propeller gear box oil, part having vaporized as it hit the 1050 F exhaust manifold.

The prop gearbox adaptor is attached to the crankcase with 4 ten mm Allen head bolts. The top left bolt had failed causing temporary distortion of the adapter and allowing oil to escape past the "o" ring seal.

This appears to be a random failure, however I believe all 4 bolts were hitting imperfect threads at the bottom of the blind holes and thus not providing the design clamping force for the specified torque of 30-35 foot pounds.

I installed 4 new Grade 8 Allen head bolts with the last thread ground off and torqued to the lower 30 ft. lb. limit for the remaining 16 threads. All's fine after 10 hrs. flying.

My expansion chamber length is now correct and most of the noise suppression section of the muffler has been reinstalled. The engine is considerably quieter (equal to Brock's production unit), it gives better spark plug life and has not momentarily dropped several hundred rpm as I mentioned in my last letter.

BE ALERT FOR ADVERSE AILERON GROUND STEERING ACTION. It is very noticeable on N3VD from a smooth touchdown at 60 mph to about 40. On our nice wide runway, I was able to check it with deliberately neutral rudder pedals, finding I was able to steer right, left and straight with ailerons only. To negate this effect, I try to keep neutral ailerons whenever 3 wheels are on the ground.

The large tires are very prone to rotation in flight, and being poorly balanced cause a disconcerting vibration of the canard.

The bearings furnished with my large tire option wore out during taxi tests. I found a replacement which worked very well and fit with no modification: General, stock #32264-88 sealed type.

The recent advice to check the wheel bearings paid off for me. One of them was sticking. I replaced all 4 with Delco NDH Bearing #99502H ball bearings. (The parts lady gave me 17mm instead of 5/8" and it took a while to figure out what was wrong!)

In regard to Stripling's method of tensioning the rudder cables by lacing, that's ok for retrofit, but for new construction or replacement, here is how I did it: (ALL THESE CABLES SHOULD BE TENSIONED TO AVOID FLUTTER)

Nicopress sleeve on one side of cable, cotter pin other side of sleeve. Hook spring between cotter "eyes". Protect tailspring from abrasion with tape or wide plastic ties. 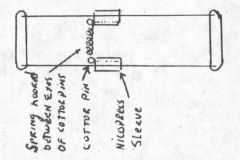 Before threading the cable through the thimble, slip a piece of heat shrink tubing over it, squeeze and trim the cable end then shrink the tubing over the cut end. No sticky-the-finger-on-the-sharp-cable-end.

During my current annual maintenance release inspection I decided that the elevator end play had reached limits and removed the elevators. In addition to end spacer wear, I found the starboard torque tube had wasted by about 6% where it passes through the inboard tufnol bearing (approx. 100 hrs on the aircraft). The port tube wasted 2%. The glass laminate holding the tufnol bearings came right down to the tube and probably contributed to or even caused the problem. After much thought and discussion, I have bushed the tufnol bearings with a nylon bearing material (wall thickness 1/16" and 1/2" length). The new bearing is stepped on the outside to locate its position and to face the new spacers. It is epoxied in place and will double the bearing area. I dislike design changes and am apprehensive about unforeseen effects, but the rate of wear of these components on my aircraft is not satisfactory.

The motor on my Q-1 has stopped 3 times on short finals at about 1 year intervals. After the first, I fitted a Balston 4 micron filter downstream of the standard fuel filter. This catches all fine contamination down to bacteria size so the fuel is clean. The motor was tuned with an exhaust gas analyzer and we found a considerable difference in jet setting between cowl-on and cowl-off. The jets were then sealed with dope dabs to prevent unauthorized adjustment. All this did not cure the problem and it now seems the slow running jet is being constricted in spite of the clean fuel. I wonder if lead deposit is causing the constriction. Presently the slow jet is set rich to try and avoid another stop.

I always wondered why Jim Prell's original Onan didn't run well just above idle speed. It also had a sort of "flat spot" in acceleration. Upon close inspection of the carb, I found that the idle transfer port was not drilled deep enough to intersect the idle passage (hole is .032 drilled into carb body about .200 above idle hole at a 45 degree angle to throttle bore). I had been previously assured this passage was not plugged; it was rather interesting to find out it never existed.

IDEAS WORTH CONSIDERING: While browsing through some Onan parts and service manuals I found an engine similar to ours that has an electronic ignition. It is used in Deere garden tractors and who knows what else. If one was to buy all the parts, it might be retrofittable to a Quickie.

Our Quickie is viceless and very pleasant to fly. Vortex generators are successful in allowing us to fly in rain though the prop suffers badly. We will undoubtedly have to replace the Onan sometime (probably with a Rotax), since it already required a re-bore. Keeping it cool is clearly critical to engine life and it is important to put the CHT probe on the hottest part of the cylinder head.

From Norm Howell, FL (soon to be worldwide)

Another source of vibration can be traced to aluminum baffling rubbing or in vibration contact with the cowl. This can be detected by a higher level of vibration at the higher power settings. I theorize that higher engine motion causes this cowling interference, which is not noticed or suspected during taxi testing. By careful trimming, I was able to reduce my vibration significantly.

During a test flight, the oil line to my oil pressure gauge broke at the fitting to the instrument, dumping a steady stream of hot oil on my leg. It got me a second-degree burn before I put it down on a state highway. I had replaced the plastic line with copper at the suggestion of a local A&P. Fatigue failure or over tightening was the culprit. Solution: put a restrictor in the fitting on the engine with a very small hole to reduce oil loss from this type failure...or use an electric gauge. I bought a Stewart-Warner auto oil psi gauge for $35. Works great!

(p10-12) When you rig your elevators, plans call for CSA-6 and CSA-7 arms to be set parallel prior to drilling in the CSA-7, CSA-8, CSA-6 bolts. However, you may have to adjust the rod end bearing slightly between CSA-6 and CSA-7 to assure that both elevators are EXACTLY at the same deflection. If you get it off so that one elevator is +2 degrees and the other is -1 degree, you will get to imitate Craig Hosking's upside-down landings as your plane rolls over uncontrollably upon its first liftoff. Roll tendencies can be cancelled out by proper length of these 2 rod ends, but the change is very powerful per turn. I went from a strong left roll to a slight right roll with only one turn of the mated bearings. Wendell Beckwith's first flight took full aileron and half rudder to control a 2 turn mis-rigging error in the length of these 2 bearings! Shorten the length to roll right, length to roll left. Got it?

1. Drawing fuselage patterns on foam: after marking points per plans dimensions, use a piece of 1/4"x3/4" molding as a French Curve by pinning it to the foam with straight pins.

2. Matching fuselage sides: During glassing of both sides, stick sides together with double-backed tape in places around the edges. The small amount of foam that adheres to it on removal is in an uncritical area. Keep halves together and weighted for several days for final cure of second side.

You can order a PDF or printed copy of Q-talk #7 by using the Q-talk Back Issue Order Page.