PAINTING AIRCRAFT TRIM STRIPES. A couple of tips from the auto body boys: use good quality tape with good stickum. 3M is a good tape and they have some thin "fine line" tape that minimizes paint buildup along the edges. Lay your lines down with 1/4" wide tape and even 1/8" wide if you are turning the line around a tight curve. Narrower tape minimizes the possibility of curling up in the turns, allowing paint to get under. Mask your work close to the time you will paint so the tape won't weather and pull away. Press down the tape along the line inch by inch carefully with a finger - don't get interrupted and miss an area. Mask the surrounding over-spray area with at least 2 layers of newspaper and tape all the paper joints shut to prevent any paint getting on your base coat. Check and press down masking especially at all curves.

It is a mistake to spray trim stripes as heavily as the base coat. You don't need that much paint, only the contrasting color, so get a nice uniform color layer down then quit. To prevent color from bleeding under the mask tape and producing a ragged line, you can spray a light first coat of clear which will seat the bleed areas invisibly and produce a better color separation line. Don't pull tape straight off the work but pull the tape bent back on itself and slightly away from the line. To get rid of the slight ridge between the two colors, you can sand the joint lightly with 600 grit paper then shoot a coat of clear along the line.

ED. NOTE: An electric knife is the perfect tool for cutting foam for seat padding.

I painted my #2015 myself in the garage with reasonably good results. I stood the plane on its nose to do fuselage and wings and used two 20" box fans to control over-spray (co-ordinate with neighbor to park cars out of the way). It worked well and gave me a good downdraft to control over-spray. 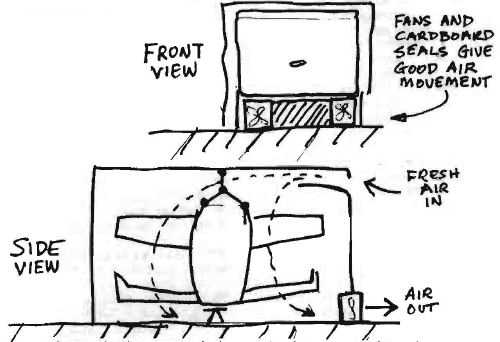 When painting, a mask is an absolute must. 3M makes a one-shot paint mask. You will need 2-3 of these.

I used four 100-watt lights on each side to remove shadows. Cil Duracoat urethane enamel was what I used over an epoxy primer. The primer can be painted over after 2 hrs. or scuff sand where needed after 16 hours or total scuff sand after 24 hours. Reason: over-spray roughness is eliminated and you get a much nicer finish in an "amateur paint booth".

I did not use N70S. The urethane/epoxy is an efficient sunscreen. If the UV gets through, it will attack the epoxy primer and cause paint peeling/cracking etc. before any structures goes.

All paint company contacts warned me away from mixing paint line products from different companies and added that a separate UV barrier is not needed with these types of paints/primers.

This is a good tip for getting "perfect every time" access holes after digging out the foam to secure the elevators. (Q2 plans page 10-10).

Make a simple jig from a 5/8" od x 2" aluminum or steel solid rod (one end finished) by drilling and tapping the finished end to accept a long AN bolt. Cut the head off the bolt. Insert the jig into the elevator torque tube hole, fill around the jig liberally with micro, and allow to cure. To remove the jig, cool with an ice cube (to contract it slightly) and break free with a sharp rotary twist and remove. Leaves a clean, finished 5/8-diameter access hole with a flat bottom to distribute loads evenly. Also a lot easier than trying to sand the inside of a small hole.

Styrofoam is SOLUBLE in motor gasoline because of the higher aromatics content. Seepage through pinhole leaks or diffusion through the plastic can compromise the structural integrity of the cores. Post curing will increase the chemical resistance of the epoxy, but it will do nothing for the Styrofoam or the pinhole leaks. If you remain unconvinced, try holding some motor gasoline in a Styrofoam cup for a minute. Hint - don't hold the cup over your new pair of shoes or expensive carpet. After a minute it doesn't matter - there's no bottom left in the cup.

2) Use Fuel System Icing Inhibitor (FSII type I, Ucar 600, Prist, JFA600 etc) only with EXTREME caution to ensure proper mixing. This material is only partially soluble in fuel, and therefore does not mix easily. In the pure form it is VERY aggressive toward rubber and plastic, and a blob of unmixed material that settles to the bottom of a tank can cause a lot of structural damage and also filter plugging from dissolved plastic and rubber. I have seen >90% loss of room temperature cure laminate strength in 48 hours, and catastrophic failure of fuel bladder rubber in 20 minutes. Interestingly, the most common test for solvent resistance involves immersion of a test coupon in hot solvent to accelerate the attack. This can cause post curing of room temperature laminates faster than damage occurs, leading to misleading good results, because post curing increases the solvent resistance.

Instead of a special pop rivet gun or large holes that require a lot of fill, I made a nose extension for my gun. Put a rivet in your gun then see how far out you can leave the mandrel with the gun still able to "pull" it. This will be nose extender length "A". On my gun it is .300. The extender is made from 1/4, 3/8 steel rod or an old AN4 bolt, "B", which has been drilled out to the size of the rivet mandrel "C".

I had residue collecting in my carb. The factory said to add another strainer, which I did, but still guck in the carb. I sawed a hole in the top of the tank (saw at an angle so the plug won't fall out on replacement) and painted the inside of the tank with Randolph sealer. Then I warmed the inside of the tank at about 190 F. for 2 hours. Now the fuel does not dissolve something in the tank, pass it thru the filters and precipitate it out in the carb due to the temp change.

I'm using a high precision bubble level (by Stanett) to mount my canard. It's telling me that my 3 year old "level boards" don't agree with each other or the level lines on the core anymore. The most consistent readings I've gotten have been with a female template made from the hot-wire male template. I relieved it so that it contacts the wing only at the leading edge and at two points along the top surface.

The two top "legs" were adjusted by sanding until the top surface of the template was parallel to the level line on the template. Do canard mounting SLOWLY. Think about it for a couple days...you only want to do this once!

1. Poor man's Cleco fastener: Use electrical cable ties in pairs. After you have drilled a hole in the 2 sheets you want to temporarily fasten, insert one of the cable ties thru the hole and use the other one as the "nut" to snug the pieces together. Great for positioning a new canopy in the old frame.

2. Have you checked the plastic reservoirs on your epoxy pump for cracks? I didn't and a considerable amount of expensive catalyst leaked out. (ED. NOTE: Michaels Engineering sells overhaul kits that include new reservoirs, O-rings, etc. at a reasonable cost).

3. Camloc makes a latch, which I'm now using for my Q-2 canopy. They are very easy to install and are used on the Lancair canopy by Neico Aviation of Santa Paula, CA.

Regarding control linkage slop, Dee Brown, Payson, AZ reports he has used AN386 taper pins with a CSK washer and stop nuts to eliminate play in his aircraft. Aircraft Spruce carries them, see page 68 of '87 catalog. Dee says taper pin reamers are expensive but you can do a good job by carefully picking the right size drill bit for each side of the bolt hole. (ED. NOTE: I saw these used on an OK Q-2 long ago but didn't understand what I saw. Soooooo.....in Jan. I tried ordering a couple of these from AS&S. Try as she might, the salesperson (after 4 long distance calls) was unable to get a price for me or take my order for ANY size pin. I just wanted to see one at any reasonable price. She seemed to really be trying, but I no gotteee one. Why they are listed in the catalog is beyond me, if they can't sell one.)

Rick Ragnell, A Dallas Glasair builder (recent finisher) showed me a classy control stick handle. He took a nice stiff glob of micro, buttered it around the control stick tube, put the CORRECT hand into a plastic glove then gripped the microed stick comfortably. No, he didn't hold it 7 hours until it cured. If the micro is stiff enough, it will hold a shape readily. A little bit of fussing on the wrinkles and voids in the cured shape followed by a shot of primer and black epoxy or satin black Krylon spray paint will make it look like you got it off a Beechcraft King Air taildragger.

One inch PVC pipe if cut into 1/8" crescents makes good general attachment points when floxed into the cockpit area.

Spoilage and time can be saved in placing the many BID tapes by sewing a line of lengthwise stitches down the middle of the BID before installing it. Small tight stitches will stabilize length and width. Before cutting the diagonal BID strips, measure and place strips of 1/2" masking tape centered on the cut line. Make your cut down the center of the tape (allow extra BID width), leaving 1/4" of tape along the BID strip edges. Now you can run this through the sewing machine and later cut off the tape edges just before application. For some applications, stitching along one or both edges may be better.

You can order a PDF or printed copy of Q-talk #7 by using the Q-talk Back Issue Order Page.