FROM THE RIDICULOUS TO THE SUBLIME

First the ridiculous: Onan Quickie rate of climb after takeoff. Now the sublime: Jim Prell's Suzuki Quickie climb rate which caused a chasing Piper Comanche to get a hot cylinder trying to catch up, and which amazed Malechek in his very nice Q-200, also trying to catch up.

Prell, in an absolute fit of unbounded enthusiasm over the performance of his Suzuki powered Quickie (he has over 130 hrs. now, 80 in flight), saw a sustained good-weather "window" and flew the 470 mi. from Kansas City to Dallas the first weekend in Oct. to let me ride. Thanks, I needed that! The last plane I flew was a Quickie several months ago in what almost was my last flight. I was beginning to think I had turned into a sissy, so it was good to climb back on the horse that threw me, so-to-speak.

Prell met me at Aero Valley, but I didn't want to fly out of there. I asked him to fly it 12 mi. north to Denton with a 4,000' x 100' runway. Just my luck, he blew out the right tire and just did wrestle it to a safe stop. Same ol' story as Hicks and others reported: the wheel half joint line finally slit the tube. I couldn't fly, and now we had to find a tube on Saturday. Thanks for hospitality; Quickie builder Henry Gardiner sold Jim both tubes and large tires, and we got a tour of Henry's Rotax Quickie project about a year away from completion.

After fixing the tire, it was time for me to strap this Quickie on...and I didn't do it without some anxiety pangs. Taxi was disconcerting in that somewhere between 3-4,000 rpm it sounded like the engine was trying to spit its pistons out the exhaust pipe. At idle, the condition diminishes, but at 4,000+ where it sounded better the taxi speed was a little bit faster than those little brakes like. Out on the runway, takeoff roll is started at 5700 rpm, which jumps on 6200 at 80 mph on the climbout. Ground roll is SHORT (STOL, for a Quickie!)...maybe 100 yds. or so. Jim's instrumentation can best be described as "Spartan"...even for a Quickie...and even what was there was limited (the altimeter was stuck on 2000'. Therefore, performance estimates are limited. Climb, nonetheless, is wonderful! (At one point I followed Jim on takeoff in a Comanche showing 1,000 fpm ROC at 80 mph and we were not gaining on him vertically or horizontally. At level cruise compared with a Comanche and Q-200, the Prell Quickie top speed was 115 mph. Vibration level was way down and the pitch-buck was much gentler than my ship, but otherwise this airframe flew like a typical Quickie. The engine sound in this installation was nice and not as ring-a-ding-dingie as the ultra-lights. Inside, earplugs are a must! Prell is piling up the hours at a rapid clip; he figures just a shade below 2.2 gph. fuel burn at cruise at 100 mph. I think it's safe to say he has a winner in this engine.

...I've had fewer problems with this plane (in 40 hrs. so far) than either of the 2 Certified aircraft I've owned. My procedure for check out was comprehensive and deliberate. It started by a thorough study of construction plans, QBA and Quickie newsletters, & a detailed inspection with the builder present, followed by a flight briefing. Taxi work last 2 weekends (5 hrs.). The runways at my airport are only 2600' x 48', but to my surprise were adequate for short runway flights. When I felt ready, I put the plane away and thought about it one more day then confirmed my readiness with another set of high-speed runs and crow hops. Dec. 21 at 2:15 I took off. The flight was uneventful but thoroughly exhilarating. The experience was equal status with my first solo and first IFR approach to minimums. The 70+ flights since then have been similarly uneventful and exhilarating. The Quickie's responsiveness makes it a job to fly, and the costs make it very affordable. Being a design engineer, I really get turned on by anything that does a lot for a little.

My aircraft has the 2-cycle Kawasaki, alternator, CDI, gear reduction and starter produced by AED before they went out of business. Mine was AED's prototype. At full throttle it burns 2.9 gal/hr, and under 5,000' altitude I see 133 mph TAS and 900 fpm ROC at 70 IAS at a gross wt. of 485 lbs. including 7.5 gal. of fuel. At a normal cruise of 2500 rpm (prop) I burn 2.2 gal/hr and true out at 107 mph. A typical take off run is amazingly short...only 225' measured at 1,400' density altitude and 485 lbs and a limp windsock. The airplane is noisy, but vibration is almost non-existent. Ground observers nearly always comment on how smooth and powerful it sounds. I think the tuned exhaust makes it quiet on the outside. I decreased the vibration still more by having a larger diameter prop made of a heavier, rock hard maple (very little flywheel mass), and by carefully tracking the blades. Prince Aircraft of Waterville, OH made both the original 44Dx52P prop and the new 46Dx49P one. Excellent quality. The 1.7 lb weight increase of the new prop is a primary contributor to smoothness, in my opinion.

I read where a pilot reported that at 150 mph his Quickie got very "antsy". I have on several occasions dived mine to 160 mph and have sensed the opposite behavior: the controls in all axes become heavier in direct proportion to airspeed, just like any other aircraft, except the relative increase seems greater for the Quickie. Could "antsy" behavior be due to CG?

After 10 hrs. flight time, my Onan engine sagged slightly on the Kevlar mount similar to that reported by others in earlier newsletters. I replaced the lower engine mount bolt with a longer one and added a few washers to shim the engine back to the proper thrust line. The sag does not appear worse after 40 hrs. Engine down thrust will significantly degrade performance!!

When you install your oil breather line (P. 17-12), it's wise to take a couple of steps to assure that the line does not collapse and cause an engine failure.

1. Insert a short piece of 3/8" OD x 1/4" ID copper or aluminum tube inside the neoprene tube so that the QS100-M6W clamp has something hard to clamp onto.

2. Take a 3/8" diameter x 8" spring and stretch it so it's 2 feet long then thread it up into your breather line. This will prevent a collapse of the oil breather line. (ED. NOTE: QBAer Mike Conlin heard a startling bang under his cowling while flying one day. His breather line hit an exhaust pipe, fused closed, and the pressure build up blew out his black breather cap). 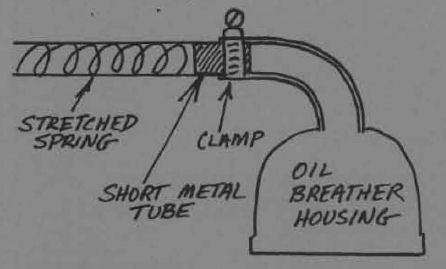 I experimented with vortex generators sufficiently to require refinishing the leading edges of 2 propellers! VG's allowed my plane to enter rain hands off, no trim, as opposed to a 10 degree pitch down requiring back stick and full power to maintain airspeed and altitude. I therefore feel that anyone would be wasting $700+ to retrofit with the new canard when he can use the proven VG's. I made them out of plastic playing cards and stuck them on with clear GE silicone so I could remove them without marring the finish of my canard.

The plastic QAC supplied to make the VG's is a .060 gauge styrene white available from most hobby shops. A 12"x6" piece will get you all the VG's you'll need. I borrowed a Sears scroll saw and used a fine Dremel blade. Then, allowing for the blade cut, strips were cut .325" wide, then blocked off in squares of 1.025, which were cut diagonally to produce 2 triangles. Some fine sanding got them to the required .27"x.94". Sand slightly on the bottom to conform to canard curvature.

Used Krazy Glue in pen form to apply them (warm canard with a hair dryer to insure quick adhesion), and found that quicker bonding Krazy Glue II was not good at all. I opted for the 10 degree offset rather than the 17 specified by QAC.

My hot engine worries ended abruptly when an ex-Lotus racing mechanic pointed out that "since the heads are getting hot, cool the heads." At his suggestion I put 2 partitioning baffles inside the forward cowling to separate the head cooling air and take it directly to the heads. At the same time I opened the air entry width 1" either side. At the back end of the top cowls the air exits are flared and the lower cowling is held off the bottom of the fuselage with spacers on the securing screws to give a 1/4" exit. The motor can now be ground run continuously rather than the previous 1 minute before heating up.

The first day out taxiing my Quickie, I followed all the good advise: several hours tail dragger time, figure 5's, and U turns. Then on my last trip down the runway, I felt a vibration in the rear and then my Quickie started taxiing to the left. '"No problem", I thought, "time for the right rudder ... right rudder (?) ... It's not turning!" Off the runway she goes, cutting the weeds with my 42-inch (now 8 inch) prop. After parking my airplane upside-down and frantically excavating to get out from under it, I towed it home.

The morning after, I noticed that the tailspring (rod) was broken loose and had positioned itself in such a way that the rudder could not turn to the right.

As I am not the original builder of the airplane, I don't know what broke loose inside. One thing I do know is that if the tailspring goes, so does the rudder control.

1. I found I should have used locknuts on every screw on the instrument panel mounting. The plans do not call for locknuts.

2. On annual inspection I found cracked exhaust pipes where I had bent the pipes to fit. As supplied, they were not correct so I made a forge, heated them up and tried to bend them. Apparently the kink was too much.

(ED. NOTE: Has ANYbody had pipes that fit right out of the box??? I doubt it. I put a long tire tool in the end of each pipe then heated each at the right point to a glow with a cheap propane torch, then bent it to exit properly. Don't kink, but bend in two places if necessary. I then cut the ends flush with the airstream line from the cowl. "They" say this is worth some airspeed).

3. Be sure your brake shoe pivot point is the correct distance from the axle for your wheels. Check the geometry carefully with templates. My templates were not correct for my large wheel pants and I have added pads to the shoes to get them closer but they wear too fast. Even with the pads, if I roll backwards and have to apply brakes, they just over-center and the plane keep rolling.

4. I added a 1" wide strap looped to my brake handle so I could reach it. The loop also works as a marginal parking brake with the seatbelt run through it. (ED. NOTE: Don't trust Velcro to hold the plans-built brake handle in place. If it falls down in front of the tank you're in a bad fix. Install a loose safety cable or rope to keep it from falling forward).

You can order a PDF or printed copy of Q-talk #6 by using the Q-talk Back Issue Order Page.