In an unbounded paroxysm of enthusiasm, Jim Prell flew his Suzuki Quickie down to Dallas the first weekend in October to show it off and give me a chance to try it on for size. He's really got something.

Jim, his wife and three kids live on the northwest side of Kansas City. He had been involved in aviation a long time. He has bucked wing rivets for Gates Learjets and worked for Boeing in Wichita. For the past 9 years, he has worked for the city in equipment maintenance and repair at Kansas City International Airport. 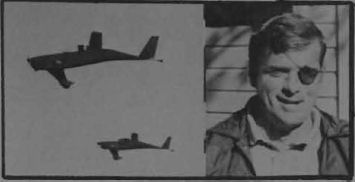 With this background, it's no surprise that when his brother Karl, a TWA mechanic, bought a Quickie kit many years back, Jim jumped right into the project with both feet. 2 1/2 years later, the brothers had an original 16 hp. Quickie taxiing up and down a 3500' sod strip. Jim did all the initial testing and found early on that the craft would make loud airplane noises but was unwilling to shake itself free of the ground. 16 horses didn't want to lift that 200+lb. package of man. QAC just then announced a $110 carb mod. Karl was none too happy when he saw what he had paid such a large chunk of green for, but the plane now seemed like it wanted to fly. Jim started some crow-hops until one day he got up; started looking around (at the inside of his intestines, he things now) and suddenly 3500' of sod had passed by. Unfortunately things weren't passing by nearly so fast vertically as horizontally. Struggling for altitude, he approached some power lines and had to ease into a turn to fly parallel with them. After a tense few moments he slowly rose and crossed over the lines.

Meanwhile, back at the airport, Karl saw his brother go out of sight very low. He began to get panicky...what had he done to his brother with this plane? He raced for a phone to get the fire department helicopter to start a search then he jumped in the car and roared off in a cloud of dust to start his own.

Miles away, but now in a clear area, Jim had to try something. He carefully pushed the nose over to gain speed. Lo and Behold he found the plane wanted to climb a bit better. He pushed a bit more. None too quickly, he got to a safe altitude, breathed a LARGE sigh of relief, and started to enjoy the airplane.

Meanwhile, back at the ranch, a helicopter and a couple small local planes had launched for a search.

The episode ended happily some time later when Jim landed right in front of his brother's car as Karl pulled to a stop back at the airport.

Both brothers enjoyed subsequently safe Quickie flying in their underpowered craft. After later joining QBA, Jim found the advice he wished he'd known earlier about the proper nose down flight attitude of the Quickie. That's what kept him nearly ground bound.

Jim was happily making cross-countries in KS and MO, when one day he encountered some rain. Having no vortex generators, the craft started a slow, continuous descent arrested finally by plopping into a muddy farm field with a final, purposeful ground loop to avoid some cows. A wheelpant broke loose, but life and limb were intact. Jim slogged several miles to a highway where an obliging state trooper hauled him to the nearest town. For a C-note a local farmer at the cafe agreed to pick up and cart Jim's bird the 100 miles back to home base.

The plane was quickly repaired and back into the air. But then came the final episode when Karl Prell attempted flight from the 3500' sod strip with an untried prop. The Quickie lifted, but would not climb more than a few feet nor accelerate above 65 mph. The ship started sinking. It crashed off the end of the runway and flipped over, trapping Karl, and raining gas into the cockpit. Alert onlookers rushed to the scene and let Karl out. The Quickie was a shambles.

Karl got over the accident, but not before he got hoppin' mad and took a buzz saw to what was left. When QBA sent Karl a survey card for his airplane, he added the immortal line "IT WILL KILL YOU!"

Jim was puzzled and took the prop remains to have it checked. He found out that the pitch was mismarked by four inches!

And thus ended the Prell's Quickie experiences. Not by a long shot!

Though he's not overjoyed by his landings that suffer from a lack of depth perception (he lost an eye in an auto accident at age 12), Jim thoroughly enjoyed his flights in the Quickie. Soon he located a mostly-built Quickie for sale by Jerry Mahurin back east. He hitched up a trailer and made a long trek to claim it for his own. As related in an earlier QUICKTALK, this plane was finished and flown with the Onan in about a year's time. The almost-fearsome Jim Prell got a couple more good scares from the mighty Onan so he grounded the craft and began an engine search.

Nearby, the Air Command guys were trying two-cycles in gyrocopters. After lots and lots of talking and looking, Jim decided that these guys could help him install a Suzuki Jaguar snowmobile engine into his Quickie. The engine is rated at 44 hp. It wasn't easy...delays, broken commitments, and finally Jim had to design and build the mount and installation himself. Jim adapted a Rotax 2:1 drive and figured out a way to mount the muffler under the hood to avoid the goiter look. Cowling fabrication seemed to take forever, but the final outcome is attractive indeed.

To date the Suzuki Quickie has about 100 hrs. on it with only a usual number of minor teething problems (he has kept up a steady correspondence with me, describing some l-o-n-g cross countries and even brought it to Dallas for me to fly). "Ring-a-ding-ding," says Jim, mocking the engine sound, but when he finally let brother Karl strap it on, Karl was seen fondling the little bird for a long time afterward.

You can order a PDF or printed copy of Q-talk #6 by using the Q-talk Back Issue Order Page.